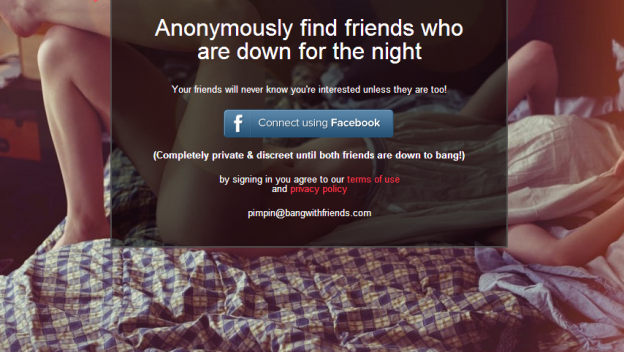 Before it even dropped its “The” prefix, Facebook was a dating site. It could never have been anything else: It was targeting college kids, it encouraged you to not only upload but tag photos, and lead to us spending more hours than we care to admit clicking through picture after picture after picture after picture. If you were bold enough, this turned into a friend request – bolder yet, a Wall Post, or even a message. And so on and so forth… whatever that “so forth” turned out to be (you sly dog, you).

It’s not like it was all that subtle, but we’re leaving behind any trace of coyness considering the blatancy of BangWithFriends, the just-launched, insanely-popular new Facebook app. The fairly unsophisticated app launched last week and seemed to be little more than fodder for a slow news day – at least, that’s what it was for us a couple weeks ago (photo proof below). But according to the developers, who remain anonymous, it’s getting real results.

The creators of BangWithFriends are grad students, who describe themselves as “badass dudes happy to play wingman to over 10,000 couples and counting now,” created the app as a more honest approach to the dating and hookup Facebook game (they’ve created other apps but wouldn’t release details as to remain anonymous – all I can find is that the site’s server is located in Ashburn, Virginia). In case curiosity hasn’t compelled you to install and try out the app for yourself, here’s how it works.

Then, you’re launched into the app, where if you’re a lady, you’ll see all your male friends, and vice versa. Simply choose who you want to bang (our own Andrew Couts was nice enough to act as guinea pig).

If that person also installs the app and picks you, you’re both notified of the mutual interest with this email:

And the rest is in your hands.

The simplicity of BangWithFriends first begs “why?” Can’t I just log on to Facebook and chat up the lucky ladies and/or gentlemen I’d like to… um, have over to watch a movie in my room with the door closed? Apparently that’s not effective enough, because in the past week more than 170,000 people have installed the app. And updates are coming: Same sex options are now available, and people who are listed as your relatives on Facebook won’t be surfaced (seriously, this must happen – it’s downright gag-inducing seeing “down to bang” anywhere near my cousins’ names and faces).

Clearly, there’s a benefit here: You can alert the object of your affection and also save face if they don’t reciprocate. And it’s working, because the creators tell me there are plenty of success stories being collecting for a coming section of the BangWithFriends site. The iPhone app is in the works too, and the developers say location-based features are on the roadmap.

But BangWithFriends seems to have started a BangWith[fill in the blank here] trend. Last week, a group of developers launched BangWithProfessionals, an app that leverages LinkedIn to hook you up with colleagues. Yes. Really.

“The whole idea kind of started as a joke,” one of the founders, Kate Doe, tells me. “We obviously saw what others were doing, but it was hard for us to think of really hooking up with someone using [these other] services.”

“That’s when we wondered how far this idea could go. So we created a landing page in an hour or two of work, created a twitter account and we were ready to test the idea. With the feedback we received since, the least we can say is that there seem to be a pretty good market for such an app.”

The app was built in 72 hours, and Doe says there’s been no comment from LinkedIn on the use of its API. “In our opinion a network such as LinkedIn might be a good place to look when trying to hook up with someone. After all, you spend most of your time at work, so chances are finding someone to hook up with based on your LinkedIn profile might be a good start.”

BangWithProfessionals functions the same way BangWithFriends does: Install, select who you’d like to bang, once they do the same, you’re alerted. Across the pond, Would Love 2 was just launched for iOS, although it’s a bit tamer and simply wants to find you someone to date – whether or not you bang is entirely in your hands.

All of these apps come with privacy problems. A simple Graph Search revealed who’s using BangWithFriends, and while seeing what LinkedIn-based apps someone is using isn’t all that easy, you will absolutely find yourself in an awkward situation if you install it “just to see” and then have to explain to your co-worker you don’t actually want to hook up with them. There are an endless amount of really uncomfortable ways this could go.

Unless, of course, they really work. The BangWith apps are almost like a new, fancy version of Craigslist Casual Encounters. Casual Encounters is an anything goes entrance into no strings attached sex (or whatever). It’s perhaps the most unsophisticated solution for your romantic whims, but it works – whether “works” is a meaningless hookup or a real date. So could it actually stand to reason that this simple, new BangWith trend is more than just an inside joke to play with your friends?

While I keep hearing there are success stories, neither of the apps are willing to reveal specifics yet. So I went to the Internet’s Ask Box: Reddit. There’s plenty of curiosity there about BangWithFriends, but not a lot of first-hand accounts – save one response.

Amid all of the half-joking posts, one user told me he installed the app and got a reciprocated Bang Request from a girl he used to see in high school and that they plan to meet up. “She was one of the first few I clicked on (out of like 25) and I got the email the next day.”

“It was a little awkward at first when I saw the email, but then it kicked in that it didn’t have to be since she was into it, too. So I just asked if she wanted to meet up this weekend, nothing complicated.”

And that’s the BangWith dream come true: The quick and dirty way to pinpoint which of your crushes is down.

The biggest issue of course is people using BangWithFriends (or Professionals for that matter) with ill intentions, either just to see what the app does or, more underhandedly, to find out which of your friends wants to bang you. “My only concern is girls who install and add all their guy friends just to find out who’s perving on them,” one Redditor responded, adding that men are equally capable of the same thing.

An understandably anonymous Quora poster was equally candid – and hopeful – about his or her BangWithFriends experience.

“It was ‘awkward’ but totally worth it. I think people are taking the wrong impression of it – the name isn’t helping either.”

“It let me do something I was only dreaming of. Maybe it wouldn’t have ever happened without it, no I’m sure it wouldn’t [have]. I’m not very outgoing and I know I’ve missed many chances that seem obvious in hindsight, or maybe it is just my imagination about what could have been… I’m not going to tell all, but it is enough to say that there was more than just physical attraction and it is a lasting thing.”

As we move beyond the hype and slowly begin to hear BangWith success stories, it seems possible that these apps are more than just chatter for the Internet water cooler. In most profiles, the developers of BangWithFriends have been portrayed as frat boys who code (I hate to say it but… brogrammers), but like it or not, they’ve touched a nerve by appealing to our most basic human instincts.

Clearly it’s too soon to tell, but early reaction seems to be that the lowest common denominator may actually be a fairly effective way to find Internet love (or lovin’).

UPDATE: Turns out, LinkedIn wasn’t terribly pleased with the whole BangWithProfessionals idea and its API key has been revoked. All user IDs have been deleted. Interested in the domain name? Contact the team for information.

Topics
Twitter’s SMS two-factor authentication is having issues. Here’s how to switch methods
Having trouble accessing your Instagram account? You’re not alone
How to use Twitter Advanced Search
YouTube brings pinch to zoom and video navigation changes to everyone
Elon Musk now Twitter CEO after firing entire board
Twitter Blue is losing Ad Free Articles and Musk’s latest tweets indicate further changes
Clear Mode on TikTok: Here’s what it is and how to use it
Twitter’s edit button could soon be free for all users
Instagram to soon let creators make NFTs and sell them to fans
Elon Musk to cut half of Twitter workforce, report says
Twitter reportedly plans to enable Edit Tweet for everyone this week
Twitter to start layoffs on Friday, internal email reveals
Twitter is reportedly working on paid DMs to celebrities