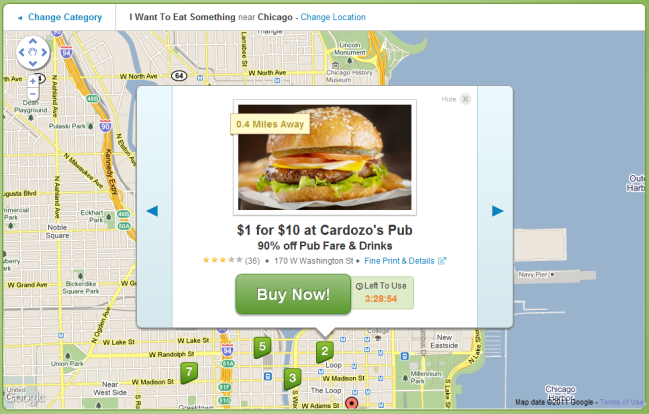 There’s some serious overlap in the daily discount and geo-social platforms. Fortunately for Groupon, the coupon curator to rule them all is launching a way to most effectively bridge whatever divide is left. We recently mentioned that the site announced it would be launching Groupon Now, a smartphone app to provide you with real-time discounts that are sent to you based on your current geographical location.

Today it was announced that Loopt, a check-in app with its own social network, is collaborating with Groupon to launch the area-aware deals app in Chicago. According to Business Week, all five million Loopt users will soon be alerted when they’re physically near a local deal, pulling that discount info from Groupon. But don’t think that means Groupon is deferring this partnership with Loopt, as the Groupon Now national launch is in our near future.

Groupon Now is currently also available in Chicago only, meaning the site is directly competing with its new partner, Loopt. But both companies are getting something out of the new business relationship: Loopt is using Groupon’s retailer data and Groupon is using Loopt’s location data. Loopt may have beaten Groupon to the punch by beginning distributing the localized deals first, but it’s safe to assume Groupon will come out the easy victor.

The daily deals market has its fair share of problems and it definitely seems like we’re nearing the end of the honeymoon stage. But this feature could put new life into what’s quickly becoming a very repetitive platform, and could spur a significant increase in sales. Groupon has been ably luring consumers in with deep discounts and timed sales, things that have proven to motivate people to buy the coupons. Add to that the element of immediate satisfaction and conveniently nearby retailers, and you’ve got a recipe for some renewed success.

Targeted Facebook ads are about to lose a big audience: iPhone owners