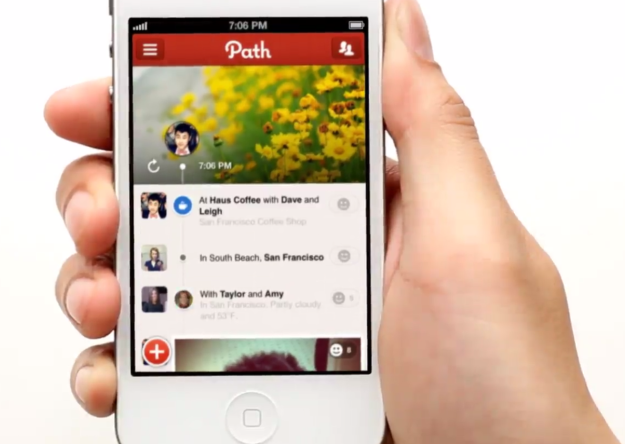 Path originally launched a little over a year ago and quickly found itself labeled the anti-Facebook Facebook. The site said it was a “personal network” that wanted to avoid some of the larger competitors’ problems by cutting through your mess of friends and limiting users to 50 contacts only.

At the time, founder (and Napster creator) Shawn Fanning explained his reasoning. “We chose 50 based on the research of Oxford Professor of Evolutionary Psychology Robin Dunbar, who has long suggested that 150 is the maximum number of social relationships that the human brain can sustain at any given time.” He went on to say that 50 is the “outer boundary” of these personal networks we create.

The new Path 2.0 is doing a lot of other big things that could take it from outsider with a novelty mission statement to a social network with more than just an idea to offer. First of all, you can bump that number up to 150. This honestly seems like a pretty big step in the right direction: those who want to continue to feel safe while sharing their Path content with a limited social network will be able to, and those who felt constricted by having just 50 contacts can add three times as many friends. And just for a little clarity, check out your Close Friends list on Facebook. How many people are in it?

But the real updates are in Path’s new user interface. It’s one of the most seamless, user-friendly, and stunning designs we’ve seen from a fringe social site—or really, any social site. It combines the impressive elements of Facebook’s new Timeline layout with more practical characteristics of your standard news stream feature.

Like Timeline, you have a header or cover photo that sits at the top of your profile. Then in the lower left-hand corner, a plus icon reveals options for posting content: music, text, location, who you’re with, and photos (which there are free and pay built-in filters for). You can also put Path to sleep, which informs your friends you’re done for the day and stops notifications. And you aren’t forced to keep your content one dimensional. You have options to include details of where you are or who you’re with as well, and you can listen to songs someone has posted in their path.

More friends and a new UI aren’t the only changes. Path is trying to rebrand itself as a mobile “smart journal.” It’s supposed to replace email, blogging, and text as your forms of communicating small, personal moments, which is fairly obvious from the promo journal. The idea is to create these rich visual and multimedia pieces of content in an eye-catching layout—and not to broadcast them to the world like you would with Facebook, Tumblr, or Twitter, but to share them more discreetly, or exclusively, with your limited network.

But you can’t talk about a social network without talking about privacy. Path has a new auto-post feature which is mostly related to location that could make some users uneasy. For example, if you take the train into San Francisco from elsewhere, Path would auto update to say “Molly has arrived in San Francisco.” It’s supposed to alleviate the pain of checking-in, which most people get sick of and forego, but it is opt-in so you obviously don’t have to let Path read your location.

Path doesn’t have as tough a job as competitors do when it comes to privacy however, largely in part to its friend network limitations. But the site is striking a certain niche at the right time: lifestreaming. Facebook’s Timeline is all about this, and FriendFeed gave it a shot as well. Some of Flavors.me’s new features share this focus, this dedication to an individual’s life story as told my rich, multimedia design.  Of course, every site competing with Facebook faces an uphill battle (especially for ad dollars: no open graph and integration apps means no marketing interest), but at the very least Path has some weapons worth checking out.

Topics
Instagram to soon let creators make NFTs and sell them to fans
Having trouble accessing your Instagram account? You’re not alone
How to use Twitter Advanced Search
What do the eyes mean on your Snapchat Story?
Twitter to start charging for verification mark, reports say
Elon Musk considers bringing Vine back from the dead
Staying on Twitter? Here are two ways to make it easier
Elon Musk now Twitter CEO after firing entire board
Twitter Blue is losing Ad Free Articles and Musk’s latest tweets indicate further changes
Clear Mode on TikTok: Here’s what it is and how to use it
Twitter’s edit button could soon be free for all users
Elon Musk to cut half of Twitter workforce, report says
Twitter reportedly plans to enable Edit Tweet for everyone this week