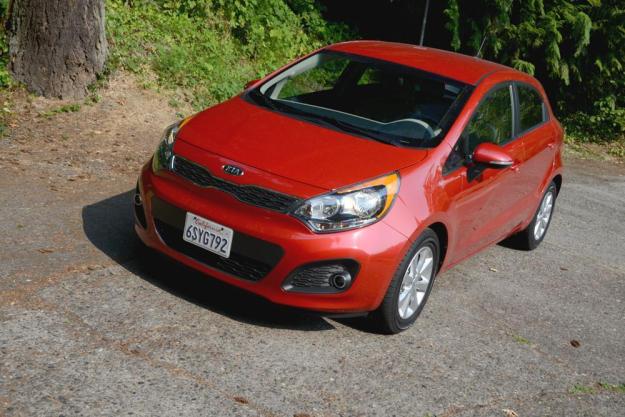 “On the road, the 2012 Rio conducts itself with a great degree of poise and humility, but more than anything else offers a sense of polish and comfort rarely see in the segment.”

We’re not sure what Kia was thinking when it christened the Rio back in 2000. We can only guess it wanted to illicit a combination of fun, metropolitan quality, and exotic vivacity. Rio, as in Rio De Janiero, Brazil is known for its beautiful women (so we’ve been told) Carnival celebrations, and samba style. And while the newest generation can boast a much livelier demeanor, the Rios of old never evoked even a slight hint of the aforementioned qualities. In reality, the old Rios never felt like a carnival on wheels, more like a prison.

Thankfully, that’s all changed. The 2012 Rio receives a much needed facelift and boasts some of the most impressive tech the subcompact has seen yet. Is that enough to propel it to subcompact king status? Let’s find out.

A Euro-inspired, carnival on wheels

There is simply no denying the visual improvements Kia has made not just with the 2012 Rio, but across its entire lineup. The Rio is fun, somewhat sporty, and most importantly, interesting to look at. Kia has done an excellent job developing vehicles that are as appealing to your financial sensibilities as they are to your need for style. Bringing former Audi designer Peter Schreyer on board  in 2006 to help lead its stylistic charge was a masterstroke, and a move that appears to be paying dividends. As for the Rio itself, what can we say other than we really liked it. Bit by bit, car by car, Kia is changing its perception as an also-ran, bargain-bin automaker to one that focuses on quality as much as it does style.

A blacked out grille greets onlookers up front, while angled and trailing headlamps sweep back alongside the front of the hood. To the side and around back, the Rio features a heavily sculpted look, with a wide, athletic stance that provides it more visual vibrancy than we’ve come to expect from Kia, and cars in this segment.

A mixed budget bag, but spacious

For us, the interior of the Rio is a mixed-bag. On the one hand we really like its simplified layout. On the other, it has a tendency to look a little too “budgety.” That’s not to say the 2012 Rio lacks quality or value, quite the contrary, it’s just that you’ll never feel like you’ve moved up to that deluxe apartment in the sky.

That’s because the Rio makes use of a lot of hard plastics. These don’t appear cheap to the eye, but giving them the old TSA rubdown exposes a less glamorous veneer. This isn’t so much a problem as it is more of a slight disappointment, but in reality we can’t say we’re all that surprised given the Rio’s aggressive price point (base models start at $13,600). Plus, some decent metallic accents throughout and our review units leather wrapped steering wheel and gearshift knob did much to give the illusion of luxury. Actually, luxury might be a strong word, but you understand what we’re getting at.

Of course, what sets a good cabin apart from a great cabin is how convenient and comfortable it feels while sitting behind the wheel. Thankfully, this is an area where the Rio excels. Everything from the steering wheel cluster, sculpted dash, and center console are all smartly placed. Adjusting the climate control knobs require little effort, as does navigating the vehicles various tech features which can be accessed through the buttons on the steering wheel, or just below the infotainment systems display.

As for driver and passenger comfort, the Rio packs in a tilt-and-telescoping steering wheel for easy height adjustment, as well as comfortable cushioning in the front seats. Leg, shoulder, and headroom is better than you’d expect from a subcompact vehicle, with passengers in the back afforded an especially great deal of space. And before we forget, cargo capacity is also among the best in its class at 49.8 cubic feet with the rear seats lowered. If you’re going for both style and convenience we recommend opting for the hatchback.

The 2012 Kia Rio is available in three different trim levels: LX, EX, and the sporty SX. As you can see, our EX review unit nestles right in the middle and boasts a surprisingly healthy amount of cabin tech for a car of its stature. For digital music lovers, the Rio features a USB and AUX interface for standard MP3 playback. Bluetooth is also available, which allows users to pair their smartphones and stream music wirelessly through their application of choice. Of course, if you’d like to kick it “old school” a single disc CD player is standard in all Rio models. Sirius Satellite radio is also standard in all Rios with a subscription.

While most of the above-mentioned features are pretty commonplace in the autosphere these days, where Kia manages to blaze new ground is with the inclusion of its Microsoft-developed Kia UVO infotainment system. Similar to Ford’s SYNC system (also developed by the Redmond giant), UVO grants you voice-activated access to the vehicle’s multimedia systems. Here you can connect your Bluetooth phones or MP3 players and simply use voice commands to control them. So, for example, while driving when we wanted to change the Sirius Satellite radio station, we simply had to press the corresponding button located on the steering wheel’s button cluster and speak the command.

Similarly, once you have paired your smartphone (which unfortunately took an exceedingly long time to do) pressing the aforementioned button and saying “call Mom” achieved the desired result. Admittedly, it’s still not as seamless as we would have liked — the voice recognition has difficulty understanding what you’re saying (partly because of its very rigid command prompts)– but it’s still an appreciated feature in the segment and one that will likely become more intuitive with increased practice. Of course, you can always forgo the voice commands altogether because the UVO sports an incredibly responsive touchscreen.

Another awesome addition to the Rio’s tech suite is the inclusion of a back-up camera. Simply place the vehicle reverse and your rearview surroundings are displayed on the UVO system’s small, but crisp, 4.3-inch touch screen. Of all the features in the car, we have to say hands down the backup camera was our favorite. It’s virtually unheard of in the subcompact segment and a feature we consistently miss when reviewing other cars in its class and above. The Rio is already a breeze to park, and made even more so thanks to this handy feature. In short, Kudos to Kia for offering it.

Unfortunately, for the digital explorer in us all, our Rio EX, priced at just over $18,000 didn’t feature a navigation system. Buyers looking for that convenience will need to opt for the maxed out SX trim which starts at $17,700, with the caveat being no UVO. Apparently, in the Rio, you can’t have your voice system and eat your navigation too…or something to that effect. Of course, buyers on tight budgets can simply work around this omission by purchasing a windshield mount and using their existing smartphone and map application. For iOS 6 users, here is a good list of map app alternatives if you’re not pleased with Apple’s.

One powertrain to rule them all

Powertrain options in the Rio remain fairly straightforward, and by straightforward we mean non-existent. Every 2012 Rio is powered by a 1.6-liter four cylinder direct injection engine. For 2012, Kia has managed to increase both horsepower from 110 to 138, and torque from 107 to 125, respectively. Transmission options are also limited with the choice of six-speed manual or six-speed automatic in the LX model. Unfortunately, both our mid-table EX review unit, and the top-end SX model are only available with the six-speed automatic.

Naturally, fuel economy is always a focal point in the subcompact segment and the Rio truly delivers. EPA fuel rating for the 2012 Rio comes in at an impressive 30 mpg in the city, 40 mpg on the highway, and 34 mpg combined for the six-speed automatic, while the manual will only net you one more mpg in the combined category. For drivers looking to get the greatest fuel returns, the Kia Rio includes an Active Eco mode located on a button to the left of the steering wheel. This adjusts the engine and transmission in a way that favors fuel economy by limits the amount of torque on hand and undertaking gear shifts early. In truth, it’s a difference that feels more subtle than anything else, but one prudent motorists will surely keep activated.

Overall we found the new direct injection engine to offer a fair amount of power and pep. The Rio doesn’t stutter like some of its competitors and the automatic transmission handles itself competently with generally quick gear shifts. When preparing to go uphill, we recommend using the six-speed automatics manual shifting option, which allows for later gear shifts and increased low-end torque.

Its name is Rio and it dances on the road

On the road, the 2012 Rio conducts itself with a great degree of poise and humility, but more than anything else offers a sense of polish and comfort rarely see in the segment.

The nadir of Kia’s recent efforts has been to push value, style, and comfort, and that’s clearly exhibited in the latest Rio. It might not sport the rally-like dynamics found in the 2012 Fiesta, but it’s much more animated than, say, something like the Nissan Versa. Underpinning the front is a MacPherson strut and rear torsion beam suspension that manages to soak up even the most jarring bumps and grooves. And while it’s not perfect, it’s a far cry from the sterile, pillowy suspensions we have grown accustomed to in previous iterations. Additionally, road feedback is on par with other vehicles in its class, but for our money the Rio’s electric steering lacks the refinement seen in the recently reviewed Fiesta.

We keep saying it, but there are a lot of great cars to choose from in the subcompact segment. In truth, it’s one of the most competitive segments where each vehicle, be it the Chevy Spark, Honda Fit, Ford Fiesta, and now the Kia Rio, are more evenly matched than ever before. Because of that, choosing one over another will come down to personal preference. While we certainly appreciate the Rio’s improved styling and excellent fuel economy, other cars like the Ford Fiesta and Honda Fit are visually more appealing. The same can be said for handling dynamics, a trait the Ford possesses in spades. Where the Rio does hammer the competition is with its tech integration, a straightforward, easy to use UVO system coupled with a rearview camera is something we are still smitten by. We can’t say for certainty that the 2012 Rio is the runaway samba star it aspires to be, but it’s certainly getting there and warrants your attention now more than ever.

The best iPhone car mounts for 2022
2023 Kia Niro EV first drive review: Practical doesn’t have to bore you to tears
Nissan wants the 2023 Ariya to be its comeback EV, but the bar has been raised
We need more 7-passenger EVs, but the 2023 Mercedes EQS SUV has room to improve
Cruise’s robot taxis head to Arizona and Texas
Uber says it’s investigating ‘cybersecurity incident’
Nvidia’s Drive Concierge will fill your car with screens
The Uber hack is an outrageous tale of a teen hacking for fun
Tesla to fix window software on 1M of its U.S. cars
Lux and refreshingly livable, Mercedes’ EQE moves EVs mainstream
How to watch Tesla’s AI Day tonight and what to expect
2023 Audi Q4 E-Tron first drive: the predictable and traditional EV SUV we need
Tesla AI Day 2022: Optimus, self driving cars, and everything else announced