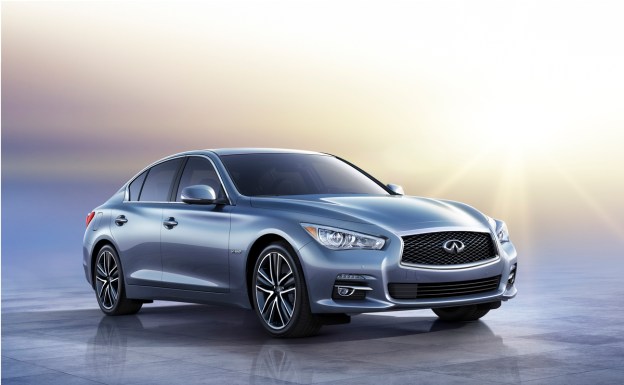 Few cars purport to be as all-new as the 2014 Infiniti Q50, which debuts the Japanese brand’s new naming scheme along with a redesigned exterior and industry-first drive-by-wire steering system. The Q50, which replaces the G37 sedan in Infiniti’s lineup, was unveiled at the 2013 Detroit Auto Show.

The Q50 may be a harbinger of change, but there is still plenty of similarities with the brand’s existing vehicles. It starts with the styling, which is inspired by the Essence concept from the 2009 Geneva Motor Show.

While the Q50 definitely looks new, its grille and calligraphic lines bear a strong resemblance to the current Infiniti G37 and M sedans. That’s not necessarily a bad thing: those are two of the best looking sedans in the business.

Another important carryover is the engine. Early reports suggested that the Q50 would get a Mercedes-Benz engine, as part of an ongoing collaboration between Infiniti’s parents, Renault and Nissan, and Daimler. Instead, the Q50 will launch with the G37’s 3.7-liter V6.

The tried-and-true V6, which has been used in everything from the Nissan Pathfinder SUV to the 370Z sports car, has the same 328 horsepower as the 2013 G37. It comes with a seven-speed automatic transmission and a choice of rear-wheel drive or all-wheel drive.

The Q50 could get a Mercedes engine down the line, though. Automobile reports that Nissan and Mercedes are developing a turbocharged four-cylinder for the Q, which will be coupled to an eight-speed automatic transmission.

A lot of the 2014 Q50 may seem familiar, but there are some major changes as well. The first is a hybrid powertrain, making the Q50 Infiniti’s second hybrid. Power comes from a 3.5-liter V6 and an electric motor; total system output is 354 hp. The hybrid will also be available with rear- or all-wheel drive.

The biggest change, though, is the debut of Infiniti’s Direct Adaptive Steering. This steer-by-wire system completely severs the connection between the steering wheel and the road; computers and electric motors replace mechanical linkages. Infiniti says the new system can transmit control inputs more quickly than bits of metal. It also comes with four programmable modes to suit a driver’s mood or varying road conditions.

HAL won’t just be helping with steering, he’ll also be watching the driver’s blind spot. The Q50 will feature Active Lane Control, a camera-based lane-keeping assistant that can read lane markers to keep the car from wandering out of its lane if the driver stops paying attention.

The 2014 Q50 is a big leap forward for Infiniti, but will it leave existing buyers behind? We’ll find out this summer, when the Q-ship goes on sale.