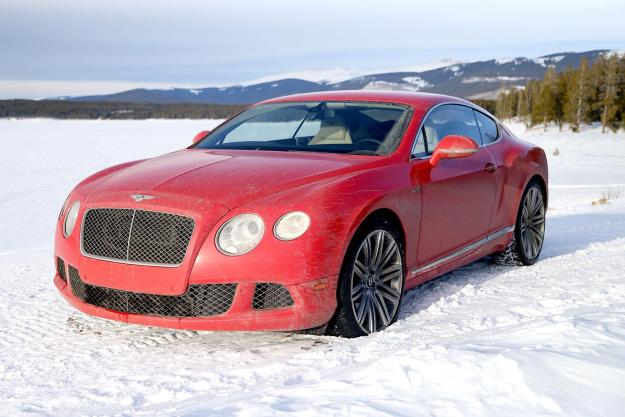 “The kind of person who would buy a Lamborghini for its power and a Range Rover for its all-weather capabilities needn’t look any further than the Bentley Continental GT Speed, as it can do virtually everything both cars can do at once.”

As I stood on the edge of the bunny slope at the Ritz Carlton Bachelor Gulch in Beaver Creek, Colorado, I wondered what I had gotten myself into.

That’s the biggest takeaway I had with the GT Speed; it’s the complete package.

I hadn’t skied in 15 years, and yet I was clothed with the latest and greatest skiwear the industry had to offer, including some top tech; I had a pair of Oakley Airwave 1.5s strapped to my head and a Canon 1D-C around my neck.

Why a top-notch Canon? Just so I could capture all the scenic majesty in 4k video, as I pizza-sliced down the hill.

While I had agreed to ski, I was really at the Ritz for the cars. When the folks Bentley asked if Digital Trends contributor Davis Adams and I wanted to drive the 2014 Bentley Continental GT Speed in the snowy Rockies, we jumped at the idea.

They added a caveat, though; Bentley’s public relations reps wanted to not only to put the GT Speed – the most powerful Bentley ever – in the snow but also us to experience the full, lavish Bentley lifestyle.

Why did Bentley want to put the GT Speed in the snow? The bespoke British automaker has a history in wintry weather.

Just three years ago, the brand set the Ice Speed Record in the Continental Super Sports Convertible. And with a masterful all-wheel drive system underpinning every one of its models, Bentley is really the only kind of exotic car you can drive on the track just as confidently as you can in the snow.

Block shifting allows the transmission to jump from, say, eighth gear down to fourth.

How does a coupe with a gross vehicle weight of around 6,400 pounds manage such speed? It packs a twin-turbocharged 6.0-liter W12 engine producing 616 horsepower and 590 pound-feet of torque under is long, silky hood. Mated to that liquid-smooth twelve-cylinder is a new eight-speed automatic transmission featuring something called “block shifting”.

In essence, block shifting allows the transmission to jump from, say, eighth gear down to fourth, should the driver feel exceedingly ardent. This saves precious seconds in transmission confusion but also allows the GT Speed to become a veritable luxury rocket ship.

I’m not just being hyperbolic, either. The GT Speed features the very latest engine management system, which can perform 180 million individual calculations per second. And its ECU Dynamic Mode allows for wheel slip at higher speeds.

Should a wheel slip, though, it’ll wrangle it back into place then give you all its torques more quickly than ever before.

While the deep guttural tones from the twin-turbo twelve that pour out of the rifled twin exhaust pipes are my new favorite sound, the best part of the GT Speed is its suspension.

The suspension systems of other Bentleys are smooth, yes. But they lack a true, planted feeling, as they err more toward comfort than responsive handling. The sport suspension of the GT Speed, though, is another tale.

While these suspension tweaks surely leave Bentley’s British engineers awake at night, salivating, what do the changes mean in the real world? Simply, the GT Speed has best suspension I’ve ever experienced. It feels connected to the road without transferring roadway imperfections into the cabin – or passengers’ spines.

You can take 50 mph corner at 70 in the snow and feel completely control. You can also hit a craggy pothole and feel nothing. Sure, you’ll hear the tire hit the hole, but that ends the experience.

While the GT Speed can handle snowy hills like a downhill dynamo, I cannot.

I watched toddlers whiz past me on the hill as my dapper, grey-haired ski instructor, Gus, and I talked tech, specifically the Oakleys.

“Yeah I can see my compass heading, speed, and I can even call up text messages from my smartphone on this thing,” I said from behind the pair of white and orange goggles.

Simply, the GT Speed has best suspensions I’ve ever experienced.

“That’s awesome. Does it project it out like augmented reality?”

“No, you’ve got to look at this little box down in the corner,” I said straining my eyes down the far right-hand corner of the goggles, focusing on a nickel-sized screen.

“Why do they call it Head-Up Display, then?”

“I guess because your head can remain up?”

“But not your eyes.”

“What about that camera, is it any good?”

Yes, of the tech toys I selected for the Bentley snow trip, the Canon 1D-C was by far the best. In fact, I used it to take the pictures of the cars you see in this story, as well as the corresponding video.

I usually shoot my pictures and video in a Canon 5D, which I thought was tops. It pales in comparison to the 1D-C, though. The cameras share a sensor, but the image clarity of the 1D is astonishing, especially with the CN-E50mm lens.

The 1D-C will shoot 4k video. I didn’t utilize that feature, though, as I didn’t bring compact flash cards large enough to accommodate the massive amounts of data created in recording 4k. Shooting instead in a lower-res format still returned some of the most striking images I’ve ever captured. I’ll let the video review, though, speak for itself.

Not only is the suspension of the GT Speed sporty and supple, but so is the interior. My blue Convertible had been fitted with Linen-colored leather with Beluga as the secondary accent color, which stretched across the gorgeous dash and onto the three-spoke steering wheel. Both colors, of course, featured contrasting stitching.

Amazingly, the interior of the convertible is actually quieter than the Coupe. Cutting through that serenity, though, was the optional and incredibly powerful Naim Premium Audio system, which – while I was driving – filled the cabin with bass-y hip-hop tunes.

Drop the top even in a snowstorm, turn on the heated and massaging quilted leather seats, turn up the neck warmer and the heater, and you’re cocooned in relaxing warmth. Behind the wheel of the GT Speed at highway cruising speeds is like what I imagine being pulled up into heaven feels like.

That’s what is perhaps most impressive about the GT Speed; it can be the sports coupe or convertible you’ve always dreamt of owning, but also the incredibly luxurious cruiser you really need for daily use.

That’s the biggest takeaway I had with the GT Speed: It’s the complete package.

Yes, it will cost you $272,000 if you choose the convertible, but you get so much more for that price than you would with anything else. Think about it. You get a 600+ horsepower drop-top, a built-to-order luxury machine, and one of the most stunning forms in the automotive industry for less than $300,000.

Certainly, you can get any one – or perhaps two – of those things in another car for similar coin. But with the Bentley, you get them all. And for that, I love it.