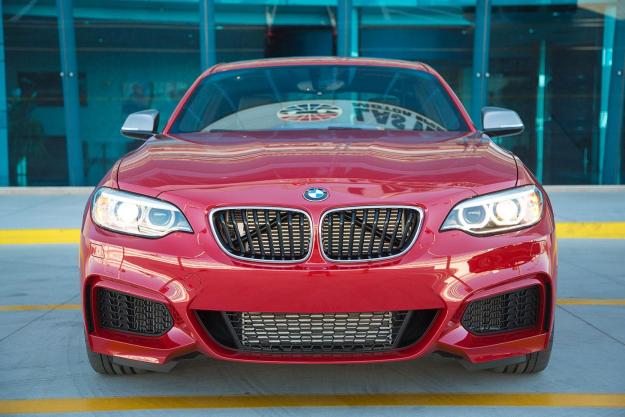 “If you’ve $45,000 to spend and driving dynamism is at the forefront of your new-car-purchasing concerns, look no further than the M235i. If, for that, money you also want a few creature comforts, you might want to keep shopping.”

We shoot most of the Digital Trends car review videos out on Portland International Raceway. And, in most of the videos, I appear to have a blast out on the track, skidding around, laughing, and raising hell.

More often than not, though, truly getting a kick out of the cars requires some acting on my part (I’d like to thank the Academy).

While it’s true that most performance cars are enjoyable to drive, like the Jaguar F-TYPE or the Jeep Grand Cherokee SRT, few hold up on the track. That’s because they’re designed not for apexes and chicanes but rather for rolling hills and running full throttle between red lights.

The BMW M235i, though, is a different story.

During our shoot of the M235i, I found myself in driving nirvana on the raceway. Calm, comfortable, and collected, I tackled the track as hard as I could from behind the wheel of the new baby Bimmer.

But the whole story of BMW’s smallest M Performance model is a bit more complicated than that.

A throwback to simpler times

The BMW 2002, if you’ve never driven one, is a nimble little German performance coupe. It perfectly combines quaint design with Teutonic precision and driving dynamism.

The BMW 2002, if you’ve never driven one, is a brilliant little German performance coupe.

When it first debuted in 1968, it rightfully helped ignite the stateside BMW craze. Since its heyday, though, Bimmers – like virtually all luxury performance cars – have become much bigger, heavier brutes. Today’s Bavarian brutes are loaded down with heavy performance bits, electronics … and German magic. These improvements have made them brilliant to drive, but woefully complex.

Eager to recapture its once-simple past for the reimagining of its Stateside entry-level model, BMW looked to the 2002 for inspiration. It shows: Like its iconic predecessor, the 2 Series is simple in its basic form. But the 235i is no slave to history. While the 2002 was a peppy performer, it was anything but a muscle coupe, especially compared to the American pony cars of the time. The performance variant of the 2 Series, the M235i, rewrites history with power to spare.

While it is true that the 2 Series is BMW’s cheapest model, the M235i can hardly be considered entry-level. That’s because – unlike the base 228i – the M235i is the most powerful gasoline-driven M-Performance model … ever.

And what allows it to take that title? First off: its engine, which is a twin-turbocharged 3.0-liter inline six-cylinder.

From there, the performance variations continue with lots of things that start – not surprisingly – with the letter M. These include an optional M Performance limited-slip differential, M-specific chassis tuning, which – for the U.S. – will include standard M Adaptive suspension, M Sport Braking system, variable sport steering, and Michelin Pilot Super Sports tires, which, after all, start with the letter M.

So, clearly, for your $43,000, you get a lot of performance kit, which is perfect for the square-jawed, steel-eyed, racecar driver in us all. What about the soft-around-the-edges daily driver in us? What does he get from the $43,000 M235i? Frankly, not a lot.

The M235i is the most powerful gasoline-driven M-Performance model … ever.

Yes, you can load up your M235i with all the sorts of goodies you’d expect from Bimmer, including iDrive with an 8.8-inch Control Display and a Touch Controller, USB, Bluetooth, and much more. These, of course, cost extra.

This is pretty annoying when you’re sitting in traffic in a $46,000 M235i and all you have to listen to is AM or FM radio … and your thoughts. I guess you could listen to Siri, too, because she’ll be your only source for turn-by-turn nav in the base M235i.

All the nonexistent bells and whistles are irrelevant, though. Expensive extras are just the name of the game. BMW is still – as it likes to claim – the Ultimate Driving Machine.

So what is this subcompact driving machine like to, well, drive? In a word: amazing.

Before we hit the track to shoot the video review of the M235i I had already become infatuated with it, as its compact stature made it easy to maneuver through downtown Portland and its suspension could be as forgiving as it could be sporty.

On the allowed racing ground, though, I garnered a new appreciation for the car.

As I said before, I enjoy many of the performance-oriented cars I drive. But when they hit the racing circuit, many fall flat in my hands: brakes overheat, steering racks lack feedback, transmissions miss shifts, suspension systems punch holes in kidneys.

On the track, the M235i just perked right up. Ratcheted up to Sport+ and the car came alive.

The steering was that perfect blend between weighty and forgiving. It reacted quickly and allowed me to be smooth and exact with my input. The brakes came on strong and never faded. The suspension kept me planted and held the body tight. The exhaust sounded sporty and had a hint of crackle but never was loud enough to draw too much attention or embarrass.

And then there’s the powertrain. Oh my, the powertrain. The eight-speed auto is still one of the best transmissions I’ve ever encountered and the inline six is BMW’s bread and butter so of course it was spot-on. It pushed me back into me seat and left me feeling like I could take on even the most seasoned of drivers.

There’s no denying the M235i is a true driver’s car – and a simply majestic one at that. But to get the M235i, you’ve really, really got to love driving.

In its basic $43,000 form, you’ve nothing more than a weekend toy, which is great … if you can afford such a thing.

To get it loaded the way I think most people would realistically want it as a daily driver, you’re looking near the $56,000 mark. That’s a lot of money for a subcompact – M Performance or not.

Yes, for that money you get a bin full of some of the most incredible German driving equipment on the planet. When you’re not on the track, though, it just doesn’t matter because you can’t use it.