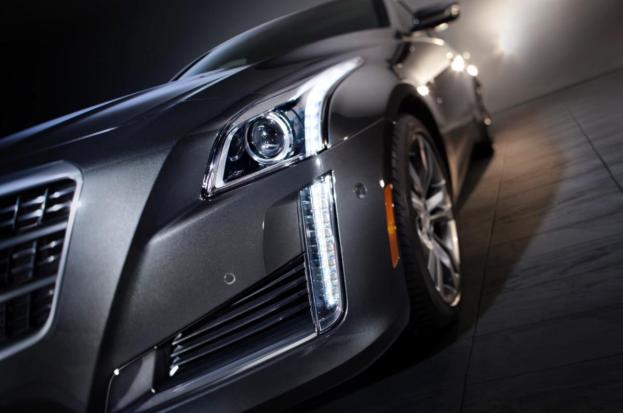 The 2014 Cadillac CTS sedan promises to be sportier and more luxurious than its predecessor, but that extra niftiness comes with a higher sticker price.

However, Cadillac says the new CTS is five inches longer than the outgoing car, moving it up into the midsize luxury sedan class, and comes with 20 new standard features.

Those features include CUE (Cadillac User Experience), the luxury brand’s touch-screen based infotainment system. CUE seeks to replicate the look and feel of a tablet on a car’s dashboard, but it can be as difficult to use as a tablet mounted to a car’s dashboard.

The Vsport model itself is also worth noting. Equipped with the top 420 horsepower twin-turbocharged 3.6-liter V6, sportier chassis tuning, and an electronic limited-slip differential, it will bridge the gap between regular CTS models and the V8-powered CTS-V, the return of which we are eagerly awaiting.

With its new stature, the CTS has also gained new competition in the form of the Audi A6 BMW 5 Series, and Mercedes-Benz E-Class.

Granted, buyers looking for a bargain basement A6 will have to specify the 2.0-liter TFSI four-cylinder, which produces 211 hp and 258-pound-feet. CTS buyers are treated to 272 hp and 295 lb-ft, courtesy of Cadillac’s own turbocharged 2.0-liter.

Gearheads will also note that the base A6 is front-wheel drive, while the default configuration for the CTS is rear-wheel drive (both cars are offered with optional all-wheel drive). The CTS is also weighs 200 pounds less than a BMW 528i. Both traits should make this Caddy a star in the corners.

We’ll have to reserve final judgment on that point until we can drive a 2014 CTS for ourselves, though. It arrives in showrooms this fall. Until then, read more about the 2014 Cadillac CTS here.

We drove Mercedes’ hand-built EQXX concept, and it’s unlike any other EV
2022 Mercedes-Benz EQB first drive review: An EV better than its gas sibling
Cadillac Lyriq first drive review: Electric manifesto
Mercedes-Benz GLC-Class takes a subtle approach to tech
Jeep is launching its first two electric SUVs in the U.S. in 2024
2024 Chevrolet Equinox EV aims for affordability with $30,000 base price
Cruise’s robot taxis head to Arizona and Texas
Uber says it’s investigating ‘cybersecurity incident’
Nvidia’s Drive Concierge will fill your car with screens
The Uber hack is an outrageous tale of a teen hacking for fun
Tesla to fix window software on 1M of its U.S. cars
Lux and refreshingly livable, Mercedes’ EQE moves EVs mainstream
How to watch Tesla’s AI Day tonight and what to expect