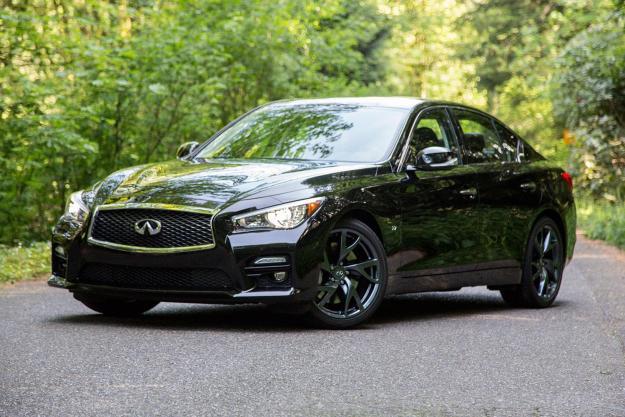 “The 2014 Infiniti Q50S might be one of the best-looking luxury sport sedans on the American market today. Beyond that, however, it’s a bit confused.”

Let’s skip the pleasantries. Rather than buttering up this review by recalling Infiniti’s finer days, with its M45 or G37, how about we just get to the meat of the thing, shall we?

The Infiniti Q50S is one of the best looking, smoothest driving, and most confused cars on the road today.

Its features run the gamut from god-awful to awe-inspiring – and everything in between. It’s left me wanting to both high-five its designers and also spit in their coffee.

It, then, is a fun car to write about … but being interesting on paper doesn’t a good car make. There’s so much to say about this thing, so let’s just start at the very beginning (a very good place to start) with its gorgeous front end.

For the last several years, I’ve found Infinitis to be horrendous looking things.

Someone, it seemed, back at the home Japan office got the idea in his or her head that chiseled was out and that bulbous was in. The result was a line of cars that looked like they had the mumps – or had been severely stung by bees.

Thankfully, along with a new naming scheme that I won’t bother to mentioning here, Infiniti has resculpted its line, starting with the Q50. Amazingly, it’s done a bang-up job. After putting the formerly badged G37 sedan on a strict Paleo Diet, the resulting Q50 looks very handsome indeed. I dare say that it’s one of the best-looking sports sedans on the American roads today.

It’s not just handsome; it’s efficient, too. The doors have been redesigned to make getting in and out of the car easier. And the drag coefficient has dropped to 0.26, which is very slippery indeed.

Finally, the mid-size Infiniti sedan looks the part of a BMW-fighter. The same can’t be said for the rest of the car, however.

Stepping inside, we find a very comfortable cabin that is distinctively Infiniti. What do I mean by that? Aside from the overuse of purple accent lighting (sorry, gents, this isn’t a Prince music video), buyers will find well-shaped seats, plenty of passenger room, and a dashboard that appears to have been pulled directly from a Nissan … but with extra stuff bolted on.

Aside from the exterior looks, the Q50S’ powertrain is its best feature.

The most offensive of these bolt-ons is the new touchscreen, called Infiniti InTouch next-generation Human Machine Interface, which resides beneath the now-ancient satnav screen in the center of the dash. Now, normally, a new touchscreen that is as intuitive and works as well as the one in the Q50 would receive top marks in my book. Installing it below the aforementioned navigation unit, though, is like adding insult to injury.

Infinitis have always been fairly nice on the inside, if not a bit garish. In recent years, though, the brand’s interior quality has been undermined by the nearly decades-old Nissan navigation system. Yes, it serves a purpose, but so does Veterans Administration … need I say more?

Rather than remove the old nav system from the new Q50 model, Infiniti designers added a supplemental touchscreen beneath it, which handles all other, normal infotainment tasks like phone pairing, radio, and climate control, that used to be controlled through that one nav screen – or by a series of buttons.

While the new InTouch interface is nice to look at and brilliant to use, it’s a bit of an oddity. It’s a stark reminder that, when creating the new Q50, Infiniti wanted to spend money to make it nice … but not too much money.

“Integrate the nav into the new touchscreen, eh? Millions you say? No, let’s just put the old nav above the new screen. Then give it a marketing-speak, buzzword-y name.” It’s the incongruity of the two screens that stands as a metaphor for the rest of the car: all the best bits are nearly ruined by the poorly thought-out extras.

Having set that tone, let’s continue to the driving dynamics.

Infiniti made a name for itself with its 3.7-liter V6. Over the years, and through its applications, it’s been many things: buzzy and fast all the way to gravely and slow. Now, though, engineers have finally refined it to its finest form. Under the hood of the Q50S, it makes 328 horsepower and 269 pound-feet of torque. Thankfully, the 3.7 is now surprisingly buttery and also very, very quick – capable of 0 to 60 in around 5.0 seconds.

I dare say the Q50S one of the best-looking sports sedans on the American roads today.

All the 3.7’s power is routed through a very keenly geared seven-speed automatic transmission, which sends power to the rear wheels. Aside from the exterior looks, the Q50S’ powertrain is its best feature. The engine provides V8 levels of power, while also returning V6 levels of efficiency. Infiniti estimates the Q50S to achieve 20 mpg city, 29 highway, and a combined score of 23.

The brakes, too, are quite good. They’re sharp without being overly grabby and – at least from my several heart-rate-raising drives – virtually fade free. And the S’ sporty suspension held the body flat in hard cornering, but didn’t rattle my teeth out of my head over uneven road surfaces.

The driving brilliance ends there, I am afraid. The electric steering was absolutely lifeless and numb. German automakers have made some numb steering systems lately, but this one takes the cake. It all but ruined an otherwise excellent driving experience.

This, unfortunately, was the normal setup. Infiniti also offers something called “Direct Adaptive Steering”, which removes the physical connection between the steering wheel and the wheels. I’ve not yet driven this DAS system, but, given the lifelessness of the standard unit, I am sure it’s nightmarish.

The Infiniti Q50S has some excellent points. And it has some downsides, too. Frankly, every car in this sport luxury sedan does. Unlike its competitors, though, the Q50S doesn’t feel like a complete, cohesive unit.

It feels confused and like a car designed with a mixed budget. Exterior styling was given all the money it needed, as was powertrain. The interior folks were given – I’d wager – about 25 percent fewer funds than they needed. While the steering team’s budget consisted of a can with a few old nickels at the bottom.

When it comes down to it, the $46,000 versions of the Audi A4 and BMW 328i are nicer on the inside, offer a more well-rounded driving experience, and are perceived to be more up-market than the Infiniti.

I’ll give Infiniti credit for trying to spice up its mid-size sedan. But it’s a bit too little too late – and certainly not enough to defeat the Germans.