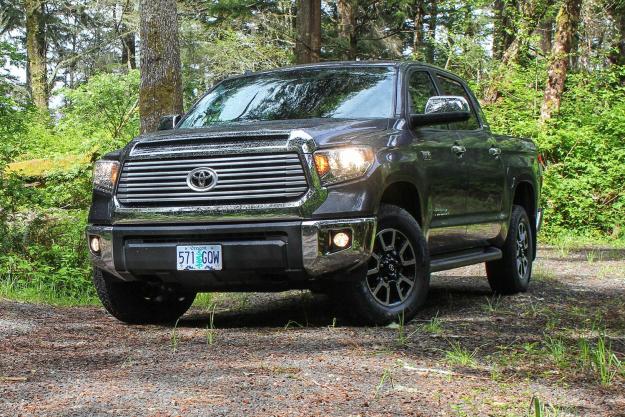 “The 2014 Tundra TRD comes with a sense of occasion whether you are driving over a sand dune or just parking outside your favorite blue-collar steakhouse.”

To me, getting a new car for a review serves as an excuse to go for an adventure. So getting an enormous truck like the 2014 Tundra TRD Limited was like hitting the jackpot.

I was excited enough that I only waited until my wife got home from work before I loaded the dog, some supplies, a couple of guns, and – of course – my wife into the capacious interior of the truck and headed to the Oregon coast.

Going on an adventure

I have owned a 2000 Toyota Tundra for the last six years, and it didn’t take longer than a few minutes for me to see how much things have changed. First off, the new truck is easily the size of Lichtenstein. There is more space in the back seat of the Tundra then there was in the Subaru Forester I drove the week before. You can fit a fully assembled dog crate for an adult pit bull in the back with ease.

The sense of size in the lifted TRD version is intoxicating. Jeep Grand Cherokees and Dodge Durangos disappear next to you as you ride high in the Tundra. My wife’s first reaction to the truck was to say that she felt like “we could crush a train.”

Thanks to the 381-horsepower 401-pound-feet of torque 5.7-liter i-Force V8, you could probably at least tow a train, so long as that train doesn’t weigh more than 9,000 pounds.

That massive V8 might be getting on in years, but it still makes cruising on the highway a lot of fun. Step on the throttle and you will blow by just about anything that doesn’t have a BMW badge on it on a wave of thunder.

In fact, the Tundra Limited will manage 0 to 60 in 6.2 seconds, despite weighing in at nearly three tons. This acceleration comes very smoothly too, thanks to a very good six-speed automatic transmission.

Just don’t set the instrument cluster display to show you your gas mileage. That kind of takes the fun out of it. During my time with the Tundra, I averaged 15 mpg, exactly the EPA rating. Shorn of context, the number is pretty grim, but it is actually right in line with its full-size competitors.

I didn’t dwell long on the fuel economy, because I finally had a vehicle appropriate for my favorite restaurant in Tillamook, Oregon: The Rodeo Steakhouse. It’s the sort of place where the floor is covered in peanut shells and you can order a hunk of cow roughly the size of a cat.

All the other times, I’ve pulled up to the Rodeo Steakhouse in a Volvo, which – despite being red and having a spoiler – just feels embarrassing next to the lifted trucks and SUVs that populate the parking lot. The Tundra, on the other hand, not just fits in, it stands out.

The basic styling hasn’t changed in the last few years, but for 2014 the truck has gotten some nice new additions. The truck features a brash new chromed grille, new taillights, and the Tundra moniker embossed in the tailgate.

If you spring for the TRD package, you get some awesome wheels, shout-y TRD badges, and a subtle lift courtesy of Bilstein shocks. All of that costs just $100 – and, no, I am not kidding. When I saw that number on the spec sheet I thought it was an error, but after doing some research, that is what it actually costs.

The truck’s looks are something of a mixed bag. I think the grille is a bit too bling, and the profile of the truck is still a bit too blocky for my taste. But these things don’t turn me off from the overall effect, which is bold and imposing.

Performance for every environment

After packing myself to the gills with steak, my wife, dog, and I headed to the family beach house. Once we unpacked, we turned in for the night, prepared for a day of adventuring.

The first stop in the morning was Sand Lake off-roading area, where off-road enthusiasts and rednecks from all over the state to hit the dunes to catch air … and sometimes traumatic brain injuries.

That massive V8 might be getting on in years, but it still makes cruising on the highway a lot of fun.

Taking the big Tundra out for a brief run out onto the sand showed off the both the grip-y stock tires and clever 4WD and traction control system. The truck might lack a proper limited slip-differential but the truck felt planted and confident in the sand.

Compared to some of the other lifted and tuned projects that were roaring around out on the dunes of Sand Lake, the Tundra might seem a little passé. But the truck still handled itself very capably. Notably, the suspension helped counter the Tundra’s massive weight and keep the truck from leaning or slipping.

The truck might be, as I have said several times, big, but the visibility is surprisingly good. From the driver’s seat, all four corners of the vehicle are easily visible. This makes it easy to navigate narrow roads without scratching the paint or running over anything that might damage the tires.

Without having the chance to do anything more demanding, I can’t actually confirm the Tundra’s off-road prowess. What I will say is that I never lacked confidence in the truck’s ability to get me there and back. And, regardless of the backdrop, the truck certainly looked the go-anywhere part.

This truck costs $44,000, and I don’t think many Tundra drivers are going to spend much time on anything but paved roads. In that sense, the Tundra Limited is like a BMW 5 Series: most drivers of which are never going to take it to the edge of the performance envelope.

What is actually going to matter is the day-to-day driving experience. On the whole, the Tundra holds up well by this standard. The Tundra does lean a bit in the corners, but then again this is a high-riding, 6,000-pound truck, so that is to be expected.

Slightly more problematic is the ride, which can get perturbed by big bumps and dips. Ignoring roadway jitters, the Tundra is still perfectly comfortable and easy to operate. The massive brakes also provide a lot of confidence, for such a big vehicle.

The big leather seats, and massive Entune touchscreen infotainment system give the interior a luxury air that is only slightly marred by the fake matte aluminum and cheap black plastic buttons. These things are a bit annoying compared with the handsome design, but they are part of the price you pay for buying a $44,000 truck that starts life at $23,000.

The biggest problem with this particular truck, as far as I am concerned, is that the five-foot bed simply isn’t big enough. Sure, you can roll down the power rear window to make room for longer items like lumber, but that’s not the same as having more room.

That being said, the Tundra comes with a wide array of cab and bed configurations meaning that you can choose the one that is right for you. The five-footer wasn’t big enough, though, in my opinion.

Thanks to its looks, size, and massive i-Force V8, the Tundra provides a sense of occasion wherever you go. And if you spring for the TRD version, and you should, you will be able to look up at the mountains and know that your truck can take you there in style and comfort.

Comfort and style aside, the truck has some flaws, the interior quality is a bit uneven, and, while it may be able to conquer the terrain, it will conquer few gas stations.

Top those detractions off with a small bed and it’s hard to call this a practical vehicle. So what to make of the latest addition? Well, unlike the basic, no-nonsense Tundras, I am familiar with (mine has wind-up windows and a bench seat), the 4X4 Limited is no work truck.

Instead, this truck is a luxury vehicle for people who care more about the feeling of owning a rugged go-anywhere vehicle than they do about gas mileage or performance. If that is what you want, then the Tundra is hard to beat.

I know I sure was sad to give it back.