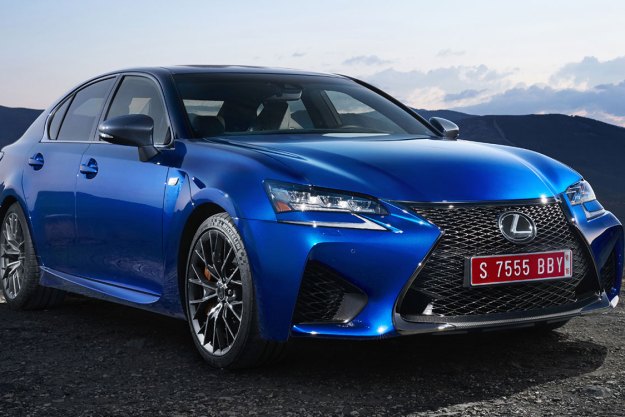 “Even up against stiff competition, the GS-F is perhaps the most balanced sports car Lexus has offered to date.”

Either by design or necessity, Lexus has chosen not to play by the same conventions as other automakers playing in the high end sports sedan segment right now. It’s a move that cuts both ways for the GS F, offering a well-balanced sport sedan experience that brings back elements of largely analog cars like the lauded E39-era BMW M5, but also falling short of current expectations in terms of sheer performance prowess as a result.

While the GS F is essentially a four-door version of the RC F performance coupe introduced in 2014, it improves upon the coupe in many ways that aren’t inherently obvious on paper. And although the GS F isn’t likely to start racking up production car lap records any time soon, Lexus wisely chose not to lose sight of the brand’s luxury roots, one of the company’s strongest virtues.

A number of the GS F’s most attractive qualities are tied to that decision, and on the whole, it results in one of the most well sorted performance offerings the company has ever brought to market. Considering how good the car is taken out of industry context, it’s a bit of a shame that the GS F’s price tag puts it in league with cars it simply is not equipped to compete with, but buyers whose habits lean more toward grand touring than track days may not have much to be concerned about as the numbers seem to imply.

It’s been nearly a decade since Lexus through its hat into the ring in this segment with the IS F. That model served as the company’s answer to cars like the BMW M3 and Mercedes-Benz C63, cars with a loyal enthusiast following and the performance capability to back up the badge.

Though it was perhaps a step or two behind those German rivals when it came to dynamics, the IS F made it clear that Lexus intended to pursue this high performance venture in earnest, and the company continued to improve the model in substantial ways throughout subsequent model years.

While the IS F has been absent from the roster since the model’s overhaul earlier in this decade, the F treatment has returned to the fold as RC F coupe and its sedan counterpart, the GS F.

The GS F employs the use of Lexus’ 5.0-liter, naturally aspirated V8, here making the same 467 horsepower and 389 pound-feet of torque that it does in the RC F, but it’s now installed in a vehicle that’s closer in dimension (and to some degree, price) to cars like the Cadillac CTS-V and the BMW M5.

Therein lies the biggest obstacle for the GS F – while it may be the most well executed sports sedan in the company’s history, the rest of the industry is operating in the realm of 600 horsepower, dual-clutch transmissions, and cutting edge suspension and stability control technologies. It’s military-grade hardware that the GS F lacks, for the most part, and it makes the case for the Lexus a tough proposition, at least when browsing the spec sheet.

Although the GS F may be outgunned on the track, its lack of hardcore performance hardware offers some benefits in the realm of grand touring. Take, for instance, its eight-speed gearbox: It looks the part with the steering wheel-mounted paddle shifters, but as a traditional automatic rather than a dual clutch unit like the one available on cars like the M5, its shifts are less urgent, even in the Sport and Sport + drive modes. Yet in daily driving use that yields some benefits too, like the lack of shift harshness and off-the-line judder that’s typical of dual clutch units.

Lexus wisely chose not to lose sight of the brand’s luxury roots, one of the company’s strongest virtues.

The suspension is a similar story – nearly every performance-oriented automobile you’ll find in this price range uses some sort of adaptive damping system, which allows the driver to adjust suspension firmness on-the-fly, in turn allowing the car to provide a firm suspension for high performance driving or a more compliant feel for everyday use.

The GS F, by contrast, stays old school with static setup. While it doesn’t offer the versatility of an adjustable system, Lexus has simply tuned it well, and it’s in fact better than the harsher tuning found on its RC F brethren, both in terms of compliance and predictable dynamics. It’s supplemented by torque vectoring differential that can adjust the output sent to each rear wheel in order to improve turn-in and quell oversteer when called upon to do so.

The GS F’s 4,000-pound curb weight and V8 thrust mean that serious brake components are in order, and here the Lexus undeniably delivers. The system consists of Brembo six-piston calipers and 15-inch discs up front, while four-piston units clamp down on 13-inch discs in the rear. Together they provide ample stopping power with good pedal feel with no sign of brake fade after spirited high-speed runs along our favorite back roads, and remained quiet during every day use.

Grand touring is certainly one of the GS F’s strong suits, and the well-bolstered sport seats with 10-way power adjustment for the driver and eight-way adjustment for the passenger provided admirable support during hard driving but also remained comfortable during a mid-day trek from Los Angeles to San Diego. The interior of the GS F is a nice place to do business the whole, but the infotainment system, and its input method in particular, stand out as areas desperately in need of improvement.

While the infotainment system offers slightly dated visuals throughout, it’s the bizarre joystick-meets-trackpad controller that elicits a maddening user experience. Navigating to the intended function more often than not feels completely by chance, and the accuracy and attention required to actually get almost any basic function accomplished means you’ll need to be stationary to do just about anything worthwhile with it. Mercifully, the HVAC controls are still a set of physical buttons on the instrument panel and the audio system still employs the use of knobs and steering wheel buttons.

Despite its shortcomings in a horsepower-obsessed segment, the GS F is very solid grand tourer and among the best performance sedans that Lexus has produced to date. Its limited production means that Lexus includes a laundry list of standard features by default, but the result is a price that puts the GS F into a segment that encourages comparisons that don’t work in its favor.

From a dimensional standpoint, the GS F competes with sports sedans like the Cadillac CTS-V, BMW M5, Audi S7, and Mercedes-AMG E63. Its price is within striking distance of the Caddy and the Audi, but it falls short of the CTS-V’s performance in nearly every aspect and its design isn’t as sophisticated and accessible as the Audi’s.

One aspect that may work in the GS F’s favor is its exclusivity. 2,000 examples will be brought to the U.S. in total, so you probably won’t confuse it for another GS F in a parking garage. But that also means that Lexus is unlikely to make any sweeping revisions to this iteration of the GS F, leaving the model to remain as-is until the GS sees its next major refresh.

If you’ve been missing the analog experience found in sport sedans of years past and grand touring is higher priority than outright performance in your purchasing decision, the GS F is certainly worth considering.

If the latter, the GS F is undeniably outclassed by several of its competitors in this segment, though the real-world value of 600+ horsepower rather than 467 horsepower in a sports sedan is debatable when it comes to every day driving duties.