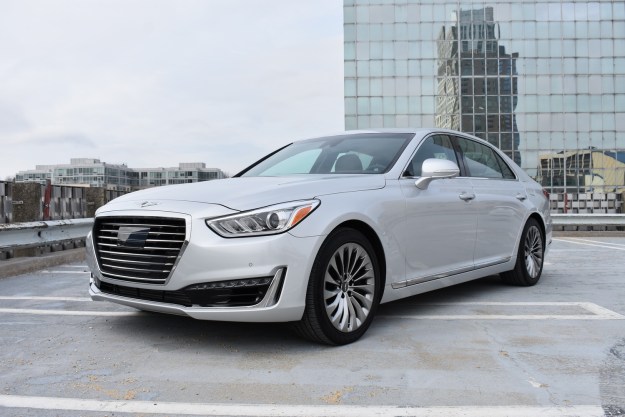 “The 2017 Genesis G90 is a competent luxury sedan that focuses on comfort over performance.”

The G90 is an all-new model. In fact, it’s the first clean-sheet design from Hyundai’s Genesis luxury brand, which launched in November 2015.

The G90 is Genesis’ flagship model, sitting above the G80 sedan in what is, for the moment, a two-car lineup. It’s a large and luxurious four-door sedan meant to compete against the likes of the Mercedes-Benz S-Class, BMW 7 Series, Audi A8, and Lexus LS. Genesis is essentially in the same position as Lexus was in the 1990s: a new name in a very brand-conscious segment and a connection to a mainstream automaker not known for luxury vehicles.

As the first model launched under the new brand and the one that will sit at the top of the lineup in terms of price and equipment levels, the G90 needs to make an impression. It needs to not only prove to be a competent rival to some well-established players, but also get potential customers to not only recognize the name “Genesis,” but to also associate it with desirability.

One aspect of Genesis’ Hyundai parentage that carries over in a positive way is the G90’s value proposition. Our G90 test car, a base Premium model with the 3.3-liter twin-turbocharged V6 and optional all-wheel drive (rear-wheel drive is standard), was priced at $71,550, undercutting the rear-wheel drive Lexus LS 460 by $1,945, and the German competition by much more.

That price buys a host of features, from 19-inch wheels and heated Nappa leather seats, to a 17-speaker Lexicon audio system, head-up display, and infotainment system with 12.3-inch touchscreen and navigation. Virtually everything available on the G90 is standard equipment; the only things that aren’t a V8 engine, full LED lighting, and upgraded rear seats with power adjustment, ventilation and a memory system.

All of that equipment is packed into a fairly unassuming wrapper. Like the smaller G80, the G90 suffers from somewhat derivative styling. The front fascia looks very similar to the G80’s with blade-like air intakes at the corner that seem to be borrowed from Cadillac’s styling playbook.

The G90 is actually easier to identify from the back than the front. Big vertical taillights distinguish it from the G80 and most other current sedans, and nice creases running along the sides of the car help make it appear smaller and tidier. Those details help make the G90 a fairly handsome car, but not one that will stand out in traffic.

A testament to the size of this car, the 12.3-inch touchscreen looks tiny nestled into its perch on the dashboard, the screen itself is fairly responsive and features sharp graphics, but its recessed position makes it a bit harder to reach. However, the rotary control and generous array of analog buttons and switches work just fine, and are easy to get familiar with. Sound quality from the Lexicon audio system—and its dinner-plate-sized door speakers—is clean and crisp.

Rear seat legroom is positively limo like, and headroom is generous as well.

The G90 features front and rear USB ports, as well as Qi wireless charging for properly equipped phones. The front USB port and an auxiliary audio input jack are located in a cubby next to the shifter that’s somewhat awkwardly shaped for the task. A pair of 12-volt outlets are located on the back of the center console.

Like most cars in this segment, the G90 gives special attention to the rear seat passengers. The rear center armrest includes climate controls and a duplicate of the driver’s rotary controller, for audio functions. It’s a great way of messing with the people in the front seats, although it can be hard to see what you’re doing, given how far away the dashboard-mounted screen is.

When it’s time to stop fiddling with the controls and get moving, the G90 also boasts a surround-view camera system, which can show front or rear camera views at low speeds, as well as an overhead view with animated lines that show where the car will go when turning the steering wheel. This kind of system might be overkill in a compact or midsize sedan, but it definitely helps in a car as large as this.

Genesis is already demonstrating an edge over its rivals in finding places to put all of the controls and screens demanded by modern infotainment features, while still keeping its interior designs relatively clean. The dashboard is nicely laid out, with quality-feeling plastics, a tasteful amount of wood trim and a classy analog clock.

The Nappa leather seats have a typical luxury car level of plushness. While it’s far from a racing bucket, the driver’s seat includes enough bolstering to feel supportive, and not like a couch you sink into. The driving position is a bit high for a sedan, but that at least helps with outward visibility, and provides the commanding feel most buyers are probably looking for in this SUV-crazy age.

Rear seat legroom is positively limo-like, and headroom is generous as well — even with the standard sunroof. The G90 nominally seats five, but putting a passenger in the middle rear seat means sacrificing the sweet armrest-of-many-buttons, and that middle seat is not the most comfortable place to be. The outboard seats, by contrast, are just as comfortable as the fronts, if not more.

The trunk can swallow 15.7 cubic feet of cargo, and a wide aperture makes loading easier. A power trunk lid is standard, and it’s connected to the G90’s proximity key, opening automatically when the person with the key stands next to it long enough. It’s a convenient feature, but a couple of unwanted trunk openings had us searching in vain for a way to defeat that feature.

The G90 emphasizes comfort and refinement over outright performance, but it can still get out of its own way.

Our test car was equipped with the base “Lambda” 3.3-liter twin-turbocharged V6 (a 5.0-liter V8 is available as well). It produces 365 horsepower and 376 pound-feet of torque, although getting those figures requires premium fuel. An eight-speed automatic transmission is the only available gearbox. Despite conducting this road test at the end of February, there wasn’t enough snow on the ground to really put the optional all-wheel drive system to the test.

From a standstill, the G90 whooshes away on a wave of torque that is almost electric-car-like in its immediacy. But the big sedan’s 4,874-pound weight starts to work against it during longer periods of sustained acceleration, and it starts to run out of steam. Aside from its ability to conjure copious amounts of torque, the engine doesn’t feel particularly energetic, and sounds a bit coarse as well.

The suspension provides a smooth ride, with only a hint of vibration over potholes and bumps. Thanks to adaptive damping, it also keeps body roll in check during cornering, although the G90 will never be mistaken for a sports car. The steering was fairly responsive, but somewhat lacking in feel. Switching into Sport mode (one of four, along with Smart, Eco, and Individual) livens things up a bit, but the G90 is clearly more comfortable with long highway cruises than twisty back roads.

The G90 is a fairly handsome car, but not one that will stand out in traffic.

Combined with a cabin as quiet as the existential void, the suspension and steering setups help create an impressive sense of refinement and comfort. But that comes at the expense of involvement. For drivers who want to be soothed and pampered, the G90 is a great car, but those who actually enjoy driving should look elsewhere.

Those looking for a fuel-efficient car should look elsewhere too. The V6 G90 does about as well as a car of this size can, managing an EPA-rated 20 mpg combined (17 mpg city, 24 mpg highway), but that will still leave frequent stops at the gas station in any buyer’s future.

In addition to monitoring the surrounding environment, the G90 also monitors its driver. The Driver Attention Alert system monitors things like steering angle, lane position, and driving time to determine if the driver is fatigued, and flashes audio and visual messages. It almost works too well, though: after about 20 minutes of driving at a steady speed on a straight stretch of highway with little steering input involved, this driver was advised to “take a coffee break.”

Federal safety ratings are not available at this time. The G90 was named a “Top Safety Pick+” by the Insurance Institute for Highway Safety—the highest IIHS rating.

The 2017 Genesis G90 is a strong start for a new luxury brand. It offers similar levels of refinement and comfort to the more-established players, although it does not bring anything particularly new or different to the table.

The G90’s competitive set consists of large luxury sedans like the Audi A8, BMW 7 Series, Lexus LS, and Mercedes-Benz S-Class. Many of these models offer a greater breadth of performance capabilities and tech features, but they can’t match the G90’s value.

The German cars in particular are stronger on technology. You won’t find anything like the BMW’s gesture control or the Mercedes’ wraparound display screen in the Genesis. The Audi, BMW, and Mercedes are also much more engaging to drive. However, all of these cars cost substantially more, and their more elaborate tech also makes them less user friendly.

The Lexus LS comes close to matching the G90’s price, but the current generation is an aging design that has fallen behind the competition in most respects. A new LS is on the way, but if you have to buy a car right now, the G90 is the better bet.

But there is one more alternative worth considering: the Genesis G80. The G80 is smaller than the G90, but is still a very large car. It doesn’t offer all of the G90’s features, but it is very well equipped and features similar exterior and interior styling. It also costs about $30,000 less than the G90, which might make it worth considering for buyers who can live without a few toys.

Since the G90 is a new model from a new brand, it is difficult to predict reliability. Genesis parent Hyundai has a fairly good reputation in that area, however. Genesis offers a 5-year/60,000-mile vehicle warranty, and a 10-year/100,000-mile powertrain warranty. The G90 also comes with 3 years/36,000 miles of complimentary scheduled maintenance, which includes valet pickup and drop off.

The 2017 Genesis G90 is a competent luxury sedan and a good value. If all you want is a comfortable ride and soft leather seats, it’s a great choice. If you want more than that, you’d be better served by one of the G90’s rivals.