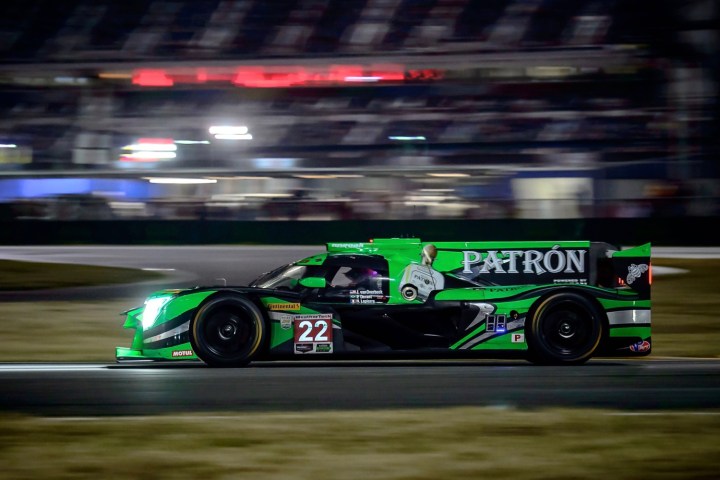 Speed is great, but it takes more than speed to win a legendary endurance race like the 12 Hours of Sebring, which has been a fixture on the United States racing calendar since 1950. A combination of durability and fuel-efficiency got a team of Nissan drivers to the top step of the podium this year.

When it comes to U.S. motorsports, the annual once-around-the-clock race in Sebring, Florida, is rivaled only by the likes of the Indianapolis 500 and Rolex 24 at Daytona in iconic status. This year, drivers Pipo Derani, Nicoals Lapierre, and Johannes van Overbeek took their number 22 Tequila Patron-sponsored Extreme Speed Motorsports Nissan Onroak DPi to victory. It wasn’t just sheer speed that got them there.

As the race wound down, the focus was on fuel-efficiency, Derani told Racer. He made what turned out to be the winning pass with one hour and 35 minutes to go, but he still had to get the car to the finish line. Derani had to maintain enough speed to stay ahead of rivals, while conserving enough fuel to actually make it to the finish. Like a miserly commuter trying to squeeze every last drop out of a tank of gas, he got a low-fuel warning on the last lap.

Things could have gone very differently. The other Extreme Speed Motorsports Nissan, car No. 2, was eliminated before completing a single lap. A collision with the number 90 Cadillac caused so much internal damage that the car was taken out of the race. That Cadillac started the race in pole position, but was involved in another crash with two hours to go. In a race this long, anything can happen.

At Sebring, drivers spend as much time fighting the track as each other. The 3.74-mile Florida venue includes repurposed runways from the old Hendricks Army Airfield, where U.S. Army Air Force B-17 crews trained during World War II. So while most racetracks are entirely smooth pavement, Sebring has patches of rough concrete that punish cars. This year, the winning Nissan completed 344 laps — totaling 1,286.56 miles.

While Cadillac has dominated the IMSA WeatherTech SportsCar Championship, of which Sebring is a part, Nissan’s main rival turned out to be Mazda. Thanks to its RT24-Ps’ tiny 2.0-liter engines, Mazda had the fuel-efficiency game down. But its number 55 car was taken out of contention when its engine hesitated to restart after a pit stop, while brake problems dropped the number 77 car down in the order.

Nissan, Cadillac, and Mazda all competed for the overall win in purpose-built “prototype” race cars, but Sebring also includes two classes for cars based on production models. In GTLM, the number 911 Porsche 911 RSR defeated BMW, Chevrolet, Ford, and Ferrari for a win in its class. The number 48 Lamborghini Huracán GT3 took the win in the lower-level GTD class.