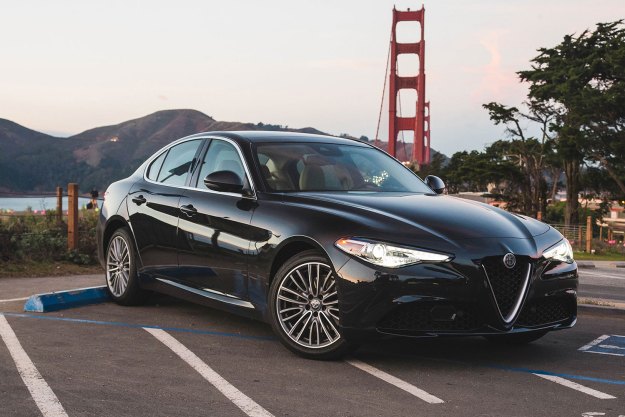 “If Ferrari ever created a BMW 3-Series competitor, the Alfa Romeo Giulia would be it.”

Being in an unfamiliar car is perhaps one of the single greatest appeals of the Alfa Romeo Giulia sedan. And I wasn’t even in the head-snapping, high-performance Quadrifoglio. Instead, I was in the third lowest spec’d, mid-grade Giulia from the base model. As it turns out, you don’t need the fanciest Giulia sedan to make everyone curious, if not jealous.

You don’t need to have the fanciest Giulia sedan to make everyone curious, if not jealous.

There’s an incredible level of buzz around Alfa Romeo’s first vehicle sold en-masse to the U.S. market in over twenty years, since the 1995 164 sedan. Enthusiasts love the idea of buying a new, sexy, unique car that adds spice to the predictable luxury sedan market. But is it as good as everyone makes it out to be?

The standard Giulia arrives in two main trim levels – the base Giulia, starting at $38,195, and the Giulia Ti, at $40,195. There’s also the high-performance Quadrifoglio with a $73,700 sticker. Our tester stamped its window at $51,490, putting it right in the same competitive segment as the BMW 3-Series, Cadillac ATS, Lexus IS, Audi A4, Jaguar XE, Mercedes-Benz C-Class, and the Infiniti Q50.

The Giulia’s interior immediately gives the impression of being a thoroughbred sports sedan, with its dashboard center stack angled towards the driver for easy reach, and supportive bucket seats. In fact, sitting in the Giulia’s driver’s seat is reminiscent of the classic BMW E90 3 Series, produced from 2004 to 2013. Yet the Alfa’s insides feel more spacious and welcoming with a warmer ambiance, thanks to the Giulia’s Lusso Light Wood inserts and Crema leather giving off a vibe designed by Versace. There’s plenty of room for up to five adult passengers, as long as not many of them are over six-feet tall.

Enter any of the Giulia’s button-heavy and robotic competitors, such as the Lexus IS, BMW 3-Series, Audi A4, and Mercedes-Benz C-Class, and it’s very apparent in-car technologies are key highlights of their driving experiences. The Giulia’s simplistic interior seems more spartan. But despite the deficit in buttons, there is no shortage of standard tech.

You still get the usual arrangement of in-car features that you’d expect to find in any other car in its class, such as traffic-assisted 3D satellite-navigation, SiriusXM Radio, Apple CarPlay, Android Auto, and access to in-car settings and preferences. There’s no touchscreen, so you’ll have to use the BMW iDrive-like center-console-mounted dial controller. It’s all displayed via a high-definition 8.8-inch infotainment screen, which is integrated into the dashboard’s fluid design. Overall, the Giulia’s interior feels more organic, and the screen doesn’t appear tacked on the dashboard like an afterthought, as found on some of its competitors.

An available driver assist dynamic plus package offers adaptive cruise control with stop, forward collision warning, lane departure warning, and an infrared windshield. These are solid features, but they’re not at the top of the class, and they’re only available as option. The Giulia is rather short on cutting-edge safety when purchased in vanilla trim. Audi offers its “pre sense” system, which applies the brakes when a potential collision is detected, among other capabilities, as a standard feature on all A4 models. BMW also offers a less expensive Drive Assistance Package at $500 on most new 3-series models. Though as you climb up the ladder in trim, the Giulia gains an option for Forward Collision Warning w/ Automatic Emergency Braking in a bundle at $500 not available on cheaper models.

Being a sports sedan, however, the Giulia’s simple interior is geared towards drivers who prioritize the activity of driving over in-car technology and features. With less to be distracted by, drivers can focus more on driving as a sporting activity and the beautiful handling performance the Giulia offers.

The Giulia proved a lovely companion on the two-hour sprint down the famous 101 to San Francisco. Managing the city’s worn streets and steep hills with ease, the sporty seats also provided plenty of comfort and support, while the cabin remained pleasantly quiet.

The true party piece of the Giulia’s driving experience was most apparent through the twisty and tight mountain roads right in Napa’s backyard. Prior to venturing into San Francisco after a lunch at the renowned Oxbow Market, I hustled around Lake Berryessa and back over Howell Mountain, where the Giulia’s near-50/50 weight distribution and balanced composure made hunting for tight mountainside switchbacks a desired activity.

The Napa Valley area is known as a car lover’s paradise where locals are used to seeing million-dollar metal, yet the Giulia still managed its fair share of stare-downs. Its suave Italian sheetmetal is refreshing compared to anything from Germany or Asia.

Imagine that if in some alternate universe, Ferrari completely lost its minds and reached down-market to produce a direct BMW 3-Series competitor. The Alfa Romeo Giulia would be it. One simply needs to find the squiggliest line on Google Maps, set it as the destination, twist the secondary center-console-mounted knob to Alfa’s “d-n-a” driver selectable profile to “d” for dynamic and be ready to grin. Like the selectable modes in its competitors, Alfa’s “d-n-a” selector adjusts steering weighting, throttle sensitivity, and transmission response, according to the situation.

Dynamic mode puts the steering at its heaviest setting, the throttle to its most sensitive, and the transmission to its quickest shift settings, while holding gears longer to stay in the engine’s power band. For cars equipped with adaptive suspension, it sets the system at its firmest for the best handling, at a compromise of ride quality. “n” is for “Natural,” which sets everything to a happy medium, while “a” is for “Advanced Efficiency” for a focus on comfort and fuel economy.

It’s clear that the Italians know something about electric power-assist steering.

I realized 15 minutes into my Napa drive that I had the car in “Natural,” or Alfa’s term for normal mode, and yet I was still grinning like a dork. Even in the Giulia’s softest setting, with the numbing factor of all-wheel drive, and the less aggressive all-season rubber compared to the Sport models, it’s clear the Italians know something about electric power-assist steering and sporty road feel. The Q4’s steering rack is supposedly a bit meager compared to the rear-wheel drive Sport versions. But if this is as numb as it gets, I can’t imagine how much better the rear-wheel Giulia Sport feels.

The 2.0-liter all-aluminum turbocharged four-cylinder moves the Giulia quite well, but it feels a tad bit light on inspiration. With 280 genuinely rev-happy horses on tap and a fat torque curve maxing out at 306 pound-feet, it’s the most powerful car in its class when configured in similar trim. Mated to a quick and slick shifting eight-speed auto from ZF, 0-60 happens in less than 5.5 seconds. However, for a thoroughbred sports sedan, it would’ve been nice to see an optional manual or six-cylinder engine. How about an option for a naturally-aspirated version of the Quadrifoglio’s six, anyone? There’s only so much you can do to make a turbo four sound exciting before it starts to sound like—as my friend put it—a swarm of angry wasps. But I do concede that lightweight four-cylinders are an Alfa tradition. So although I wish for more, what it comes with is perfectly exquisite.

Between the spirited sprints through Napa, to the traffic of San Francisco, the Alfa Romeo Giulia’s four proved decent in fuel consumption, averaging around 24-27 mpg. It’s not best-in-class, but there are plenty of other options if fuel efficiency really is a concern. A car like the Giulia is meant to be driven and enjoyed with sporting intent.

Because we’re a fan of things on four wheels that are fun to drive, we’d opt for the Giulia Ti Sport in Stromboli Gray Metallic with a red interior. Although with Italian cars, you’d associate bright and vibrant exterior hues, such as red or yellow, opting for the unique dark gray adds a bit of subtleness and sophistication to the Giulia’s suave sheetmetal, especially with the Sport’s more aggressive front and rear facias and the 19-inch dark-painted wheels.

The Giulia is a refreshingly minimalistic and involving sports sedan.

And the red interior contrasts well to the gray exterior. Hopping up to the $40,195 Ti trim (versus base at $38,195) bundles up more optional items on the base model as standard, such as bi-xenon headlights, 12-way front sport leather seats, and aluminum trim. We’d add the $1,200 T Sport Performance package, equipping a limited-slip differential and adaptive suspension, because those things are always welcome to improve handling significantly, especially for a sports sedan.

The $650 Driver Assistance Static Package also is a good add for its Blind Spot warning and auto-dimming mirrors, also welcome additions for safety. Those who want all the safety gadgets will need to opt for the twice-as-pricey $1,500 version of the same package, which adds radar-guided cruise control with full-stop capabilities, automatic high-beams, lane departure warning and keep assist, and forward collision warning.

Though we’re a fan of the latest technology in the newest automobiles, the Giulia is a refreshingly minimalistic and involving sports sedan where its focus isn’t reinventing the wheel with innovation and technology. Instead, it prioritizes driving fun factor and if that’s your thing, the Giulia is the car to buy. If you’re looking for something a little bit more practical and tech-savvy, there are plenty of options from its competitors. But you do lose a bit of the behind-the-wheel soul and drop-dead gorgeous looks that only the Giulia can currently offer.

The Giulia has obvious competitors in the Audi A4 and BMW 3-Series, not to mention the Lexus IS. Whether they’re better depends on how much you value unique design and driving excitement. The Alfa Romeo is a different beast, offering a flair and design style that’s different from anything else. That attracted us, as it will attract anyone bored with the category’s classics. With that said, competitors like the Audi A4 do have an edge in standard safety features and in-cabin tech.

It isn’t without its quirks, which is expected, it’s Italian, they’re known for these things. An annoying rattle behind the gauge-cluster assembly presented itself over any road imperfection. And the interior didn’t feel as solid as the Germans or the Asians. And the curved dashboard and forward-mounted cup holders on the center console, means any coffee much taller than a large gets caught on the passenger temperature adjustment knob.

Though a reputation for poor reliability has long been one of Alfa Romeo’s biggest challenges, the company seems to have made massive improvements in this department. In the latest reliability survey published in 2017 by UK-based firm, WhatCar?, 14,208 owners of vehicles less than three-years old reported about their vehicle ownership in the survey. Those who spoke for Alfa Romeo led it to rank in a surprising fifth-place. As of the publishing of this review, the 2017 Alfa Romeo Giulia ranks at 4.7 out of five stars on J.D. Power’s Cars site, based on 50 consumer reviews thus far, so it is still a little early to truly tell how they hold up over time and varying in use.

Yes. As a conversation piece as an unfamiliar car that a market hasn’t seen in over two decades and just feeling different, the Giulia is in a class of its own. To which I must say, bravo Alfa Romeo! Bentornato!