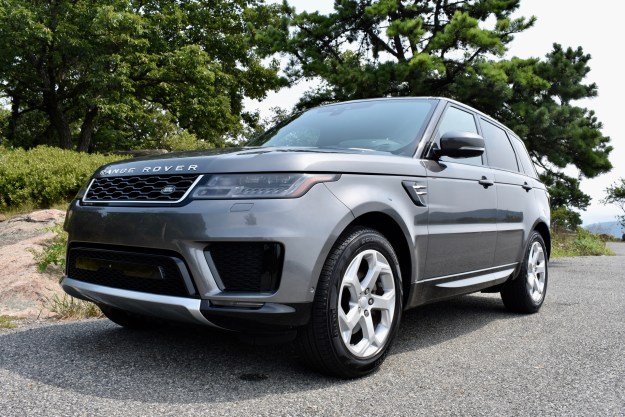 When it comes to the Range Rover, Land Rover believes you can’t have enough of a good thing. For the 2005 model year, the British firm introduced the Range Rover Sport, a (slightly) downsized model borrowing the name of the off-road legend. Land Rover launched a second generation for the 2014 model year, and that version is still in production as the automaker’s de facto competitor to midsize luxury SUVs like the Audi Q7, BMW X5, Mercedes-Benz GLE, and Volvo XC90.

Unlike most of its competitors, Land Rover offers a diesel engine, which is what was under the hood of our test car. Our 2018 Land Rover Range Rover Sport Td6 (try fitting that on an insurance claim form) was an HSE model, which is one step up from the base SE trim level, and the top trim level for the diesel.

Climbing into the Range Rover Sport involves an odd mix of sensations. Getting in requires hoisting oneself into the cab, which isn’t unusual for an SUV, but once inside the dashboard and door panels sit high up, giving the interior a cocoon-like feel like that of a sports car. It makes sense given that this Land Rover has “sport” in its name, but the tall dashboard may impair vision for shorter drivers.

Key functions for climate control, navigation, and audio require don’t require many taps of a screen.

Those expecting a carbon copy of the full-size Range Rover’s interior will be disappointed. The Range Rover Sport’s cabin is properly luxurious, but isn’t nearly as opulent as that of its big sibling. That’s not necessarily a bad thing, as this toned-down cabin will likely stand up better to the kind of abuse the rest of vehicle is designed to take. Land Rover also didn’t skimp on the tech.

The 2018 Range Rover Sport features the InControl Touch Pro Duo infotainment system previously seen on the Land Rover Range Rover Velar and sibling brand Jaguar’s all-electric I-Pace. The system uses two 10.0-inch touchscreens located on the center stack, along with multifunction knobs for climate control and seat heating/cooling. As in the Velar and I-Pace, these knobs have their own little screens that show climate-control temperature, fan speed, or seat-temperature settings, which is a neat and useful feature. Land Rover also included an all-important volume knob for the audio system.

The amount of screens and touch-sensitive surfaces becomes apparent when the vehicle is off, and the dashboard is a sea of blackness. Hit the ignition, and everything lights up like a gaggle of paparazzi cameras on the red carpet. The resolution of the graphics is impressive (this would be a disaster otherwise), and key functions for climate control, navigation, and audio require don’t require many taps. However, the sheer number of pages and menus can make other, less obvious functions more difficult to find.

The Sport’s decidedly un-sporty formula works quite well in the real world.

On paper, driver and passengers get a comparable amount of room to other midsize luxury SUVs, but front-seat space feels a bit tight once you’re inside. The Range Rover Sport is a five-seater, but the Audi Q7 and Volvo XC90 are available in seven-seat configurations. The Land Rover also trails most of the competition in cargo space.

Our test car came with a long list of driver aids, which worked with different levels of effectiveness. The adaptive cruise control and lane-keep assist worked well enough, but the forward-collision alert system seemed to have an anxiety problem. Like a nervous parent riding shotgun with a newly minted teenage driver, it cried out at every slight change in acceleration in a car in front. We also found the system to be overly sensitive when rolling up to a stoplight queue with cars in front. It was an annoyance.

By affixing the “Sport” tag to a fairly large, 4,773-pound diesel SUV, Land Rover seemed to be setting itself up for failure. But that decidedly un-sporty formula works quite well in the real world.

The Td6 engine is a 3.0-liter turbodiesel V6 producing 254 horsepower and 443 pound-feet of torque. Power is sent to all four wheels through an eight-speed automatic transmission. The Range Rover Sport is the last vehicle in its segment to offer a diesel engine option. The other holdout, BMW, is scrapping the X5 diesel as part of a 2019-model-year redesign. You can thank the Volkswagen emissions scandal and anticipated tougher emissions standards for that.

Despite its off-road pedigree, the Sport is born for the concrete jungle.

We were able to match the Land Rover’s combined mpg rating over about 300 miles of driving, according to the car’s trip computer. Volvo, Mercedes, BMW, and Porsche all offer plug-in hybrid powertrains in this segment; Land Rover plans to introduce a Range Rover Sport plug-in hybrid for the 2019 model year.

But the horsepower figure is less impressive, as is Land Rover’s claimed 0-to-60 mph time of 7.2 seconds. The Range Rover Sport Td6 is a fine workhorse, but at first glance it did not seem like a racehorse.

We were pleasantly surprised once we got behind the wheel. Despite its off-road pedigree, the Range Rover Sport seems born for the concrete jungle. On the highway, it can effortlessly exploit any gap in traffic, surging forward at the slightest prod of the right pedal. It never stops feeling like a big SUV on twisty roads, but the standard air suspension keeps the body upright and allows for fairly rapid forward progress. However, that air suspension can’t keep shudders from transmitting through the body on broken pavement, even in comfort mode.

What really sets Land Rover apart from most competitors is off-road capability, but we were not able test that out during our time with the Range Rover Sport. Among other things, Land Rover claims the Range Rover Sport can ford up to 33.5 inches of water. The automaker has sent one up the 999 stone steps to China’s Heaven’s Gate, and down a ski slope.

Our test car had the two-speed transfer case that is a perquisite to serious off-roading, as well as Land Rover’s clever Terrain Response system, which we’ve tested in other vehicles. It recalibrates different vehicle parameters to work on different surfaces, from mud to snow. In automatic mode, it senses what kind of surface the vehicle is driving on makes adjustments accordingly.

Land Rover offers a four-year/50,000-mile limited warranty, as well as a six-year corrosion/perforation warranty with unlimited mileage. Land Rover does not have the best reputation for reliability, borne out by the Range Rover Sports predicted-reliability rating of “much worse than average” from Consumer Reports.

As much as we love the 575-hp Range Rover Sport SVR, we think the Td6 diesel makes more sense for everyday use. It’s more than quick enough for everyday driving situations, and is better suited to towing and off-road driving. It’s the engine to have if you want to use your Range Rover Sport like a real Land Rover.

We would also choose the HSE trim level of our test car over the base SE because it includes extra tech features like traffic sign recognition, a driver condition monitor, and a memory system for the driver’s seat.

Digging through the long list of options on our test car, we’d keep the off-road pack and towing package. There’s really no point in buying an SUV if you’re not going to use it for off-roading or towing, and to do that you’ll need the hitch included in the towing package, and the off-road pack’s two-speed transfer case and Terrain Response system.

A 360-degree camera system is useful in a vehicle this big, but here it comes bundled in vision assist pack and we don’t think it’s worth the $2,255 asking price of that package. The same goes of the Meridian surround-sound system, which produced good quality sound but was not one of the Range Rover Sport’s standout features.

The Range Rover Sport is nowhere near as luxurious as its namesake, but it does most of what the full-size Range Rover does at a lower price. Its on-road driving dynamics, slick infotainment system, and off-road capability set the Land Rover apart from its competitors.

On the tech front, the Audi Q7’s MMI and Virtual Cockpit offer similar capabilities to the Range Rover Sport’s InControl Touch Pro Duo system without filling the dashboard with screens. The Volvo XC90 offers a portrait-oriented touchscreen that operates a lot like a tablet. The Volvo is also much more comfortable and refined than the Land Rover, while the Audi is more engaging to drive.

While the current-generation Range Rover Sport has been on sale since the 2014 model year, freshly redesigned versions of the BMW X5 and Porsche Cayenne are hitting U.S. showrooms. They could give Land Rover a run for its money.

Yes. The Range Rover Sport can do it all. It’s got a tech-filled cabin, impressive on-road dynamics, and it can go places where most of its competitors can’t.

How to join a clan in V Rising

A surprise party goes horribly wrong in Take the Night