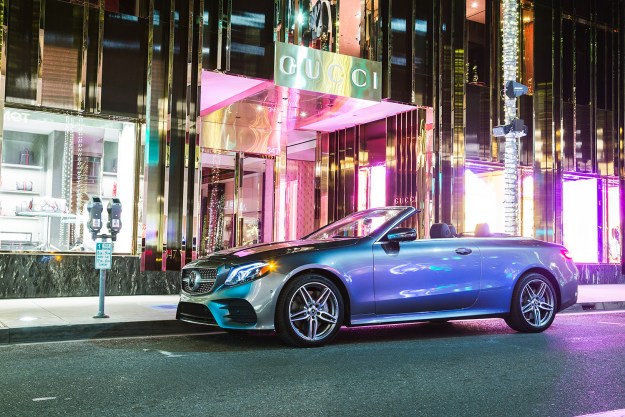 After sampling the latest Smart ForTwo Electric Cabrio in San Diego, I extended my time in Southern California for a road trip up the famous Interstate 5 to the greater Los Angeles area. But to make sure I got up to Manhattan Beach in an appropriate manner, Mercedes-Benz offered up its latest E-Class Cabriolet as my chariot up to, and around LA proper.

A week, with a Mercedes Cabriolet, in sunny SoCal – were they trying to put me in a Hollywood set? In California, especially Los Angeles, the Mercedes-Benz convertible of any sort is so ubiquitous that it could almost pass as the official vehicle of SoCal. Finding one parked near Rodeo Drive in Beverly Hills or in the hills of Hollywood is as stereotypical as it gets. So, one cannot pass up the opportunity to live out such an iconic experience to see if 2018 Mercedes-Benz E400 Cabrio fares in its most idyllic setting.

The current latest and greatest Mercedes-Benz E-Class arrived initially as a sedan in 2016 while its two-door variants surfaced a short year later both in hardtop and convertible forms. Differentiating the sedan from the two-door versions is a sole engine choice of a twin-turbocharged V6 under the E400, with or without all-wheel drive, short of opting for the full-fledged high-performance AMG variants. Starting at around $66,300, it competes with the likes of the Audi S5 Cabrio and the upper tier of the BMW 4-Series Convertible, the 440i.

When Mercedes-Benz introduced the current W213-generation E-Class back in 2016, the company touted it as the most technologically advanced car it ever made. And, being a Mercedes, technology and innovation is and always has been at the forefront of its experience. Familiarity rings many bells with the inside of the E400 Cabrio, particularly if you’ve been inside the more expensive S-Class and E-Class sedan before. Yet, despite the smaller proportions than the much larger S-Class Cabriolet, there’s still plenty of space for full-size adults, even with the top up (which couldn’t be said for many other convertibles in its class).

The same high-definition and vibrant dual 12.5-inch screen setup spans the dashboard, compliments of the top-of-the-line $9,350 Premium Package 3, housing everything from the gauge cluster display to the sat-nav, along with everything associated with Mercedes’ COMAND infotainment system. Otherwise, analog gauges with a center LCD screen come standard with only one 12.5-inch screen.

Start fiddling with things and it’s immediately apparent how everything feels as precise and detailed as a Rolex, with top-notch quality materials and no obvious signs of cost-cutting, harking back to the automaker’s reputation for feeling over-engineered. From the real wood trim, to the soft, Nappa leather seats that massage you like a Brookstone recliner, an extra $950 option. Speaking of which, those really took much of the edge off the three-hour trek up Interstate 5 to LA.

When the latest E-Class arrived, Mercedes-Benz touted it as the most technologically advanced car it has ever made.

There’s such an incredible amount of attention to detail, that you’ll want to dedicate some evening reading time to going through the extensive owner’s manual just to get an idea of how much the E400 Cabrio can do.

The E400 Cabrio can blast your neck with hot air on the colder days with the top down, from headrests with built-in auxiliary heated fans – I kid you not. The armrest too comes heated, compliments of the $1,050 “Warmth & Comfort Package” (included in Premium 3) along with the steering wheel, and seats (which are also cooled).

Should the exquisitely designed and well-built interior not cosset you, the interior ambient lighting offers 64 selectable hues to fit your present mood. And there’s even an “active fragrance system” that makes the cabin smell like the perfume section of Nordstrom every time you get in. The center console features an NFC connectivity and wireless charging pad for compatible phones. Out back, a power smart divider in the trunk automatically folds out with the top down to prevent your luggage from inhibiting the folding roof’s functionality.

Voice activation is incredibly accurate and hugely improved over previous renditions making it easy to carry out in-vehicle actions, such as programming the sat-nav on the go, to managing Android Auto and Apple CarPlay, or even enabling the front massage seats. They should’ve just called it the Mercedes-Benz E-Butler Cabrio.

But the extent of tech isn’t just limited to the interior. Thanks again to the Premium 3 Package, our E400 Cabrio featured unique adaptive LED headlights that illuminate curves ahead according to steering angle and sat-nav data. The beam actively adjusts to avoid blinding oncoming drivers or cross-traffic at intersections. Then there’s all the sort of gadgetry meant to save your life and minimize harm to others in the event of an emergency, making it one of the most crash-resistant automobiles on the road today. There’s the usual lane departure warning with lane keep assist, pedestrian detection, pre-collision assist with automatic braking, parking assist with rear-cross traffic alert, blind spot detection and more. But it’s all so seamlessly integrated that it just blends into the background without being too intrusive.

With luxury convertibles, especially in SoCal, it almost simply does not get any better than the E400 Cabrio.

In this day and age of pushing for autonomous driving capabilities, the E400’s latest radar-guided cruise control that can actually drive the car autonomously for short periods of time at speeds of up to 81 mph before it asks you to grab the wheel. So coasting on “the I-5” was about as stress free as being at the spa. Don’t get the wrong idea; it’s not a fully autonomous car, and the driver still needs to stay focused on the road.

But if you like skipping the complications to just get in and drive, then the E400 Cabrio still behaves like a normal Mercedes-Benz. The two-door E-Class variants only get a twin-turbocharged 3.0-liter V6 with 329 horsepower and 354 pound-feet of twist – that is, until the Mercedes-AMG E53 version arrives with the company’s all-new 3.0-liter turbocharged inline-six.

With Merc’s latest nine-speed 9G-TRONIC automatic, the E400 Cabrio serves up a not-so-modest 0-60 time of just 5.5 seconds. Magazine racers and statistic buffs would quickly note that the E400 Cabrio is the slowest in its class, with the BMW 440i Convertible leading the sprint to 60 in only 5.1 seconds, while the Audi S5 takes 4.8.

But the available driving modes and other driveline customization includes adjustments for steering effort, throttle and transmission response, and the behavior of the adaptive suspension – if so equipped – giving the E400 a greater level of versatility behind the wheel. Our tester came with the AMG Line sport package, lowering the suspension, adding adaptive dampers, and simple yet elegant, five double-spoke AMG sport wheels with grabbier rubber. The result is a droptop German sled that satisfies both those who like to tear up mountain curves and those who just like to sit back and soak in the scenery of the Pacific Coast Highway with the all-eternal sky above as your headroom.

Being a Mercedes, technology and innovation is and always has been at the forefront of its experience.

Steering is still a little shy on feedback and feel, but most of the customers buying the E400 Cabrio aren’t likely to care as much as a diehard driving enthusiast. And the transmission might seem a bit indecisive in stop-and-go traffic, but these are both minor quibbles for otherwise exceptionally refined four-seater droptop.

Surprisingly, the chassis, in classic Mercedes-Benz fashion, feels stiffer than a solid block of granite and unaffected by the lack of a fixed roof – an incredible feat when most convertibles suffer from a weight problem and sloppy handling from the need for extra structural bracing to compensate for less structural rigidity. And fuel economy averaged in the mid-20 mpg range with mixed LA freeway stop-and-go and boulevard cruising.

All E400 Cabrios come with Mercedes-Benz’s standard 48-month, 50,000-mile (whichever comes first) bumper-to-bumper warranty. When purchasing new, buyers can opt for an extended limited warranty that adds up to another 36 months and 100,000 miles worth of coverage, depending on how far said buyer wants to elongate the policy. Mercedes-Benzes also have a reputation for long-lasting durability and reliability when cared for.

Because it’s a Mercedes-Benz, the only real way to get the full-fledged experience is to take the E400 Cabrio as we had it – fully loaded to the brim with the Premium 3 Package, the AMG Sport Line package for a much sleeker and sportier look with larger 19-inch five-spoke AMG wheels that don’t seem to upset ride that much. While our tester came in Selenite Gray Metallic, we’d opt for Lunar Blue Metallic (to try and match DT blue) with the Macchiato Beige and Yacht Blue Nappa Leather to brighten up the insides. We’d retain the red top since that’s just a lovely combination with the blue exterior.

When it comes to luxury convertibles, especially in a place like SoCal, it almost simply does not get any better than the E400 Cabrio. Those seeking for a bit sportier driving experiences might be better off with the BMW 440i Convertible or the Audi S5 Cabrio. The E400 still isn’t any slouch behind the wheel either. But what the E400 Cabrio doesn’t do for performance, completely makes up for it with its unmatched style and level of tech and luxury, and general all-around usability.

It’s certainly more comfortable than the Audi and the BMW and overall, the E400 out-styles both in almost every respect. Pulling up to your destination in the E400 makes a statement that wows even the unsuspecting with elegance and drop-dead gorgeous looks that neither of its competitors can come close to matching, both inside and out. But you’ll have to pay for it, with our tester stamping its final invoice at a whopping $85,735.

If you’re looking for a fashionable luxury convertible that’s also surprisingly practical and an incredible all-rounder, then absolutely.