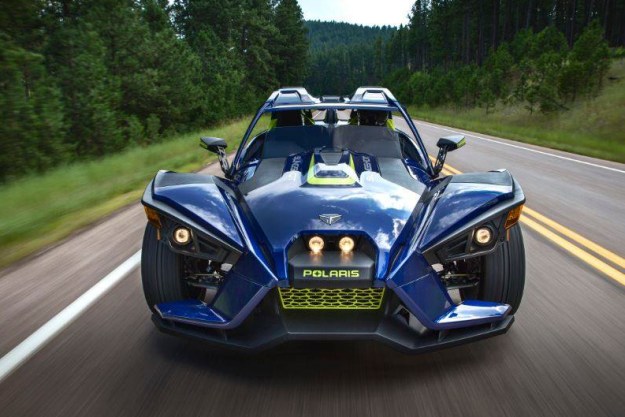 “If you drive the Slingshot for more than five minutes and aren’t smiling, you’re in the wrong vehicle.”

If you drive Polaris Industries’ Slingshot three-wheeler more than five minutes and don’t smile, it’s not for you. Above all else, the Slingshot is fun. As we quickly discovered during our 2018 Polaris Slingshot review, the fun never stops, even crawling in traffic.

With two wheels in front and one in the rear, the Slingshot is easy to drive. Anyone with a driver’s license and manual shift experience can hop in and drive off. You can‘t say the same for the Slingshot’s biggest competitor, the Can Am Spyder. The Spyder requires motorcycle-like driving skills. Classification and driver licensing for both varies by state — the Slingshot and Spyder websites have state requirements links.

This three-wheeled “motorcycle alternative” has side by side buckets, a steering wheel, a shifter for the five-speed manual transmission, and gas, brake, and clutch pedals. Slingshots have a lockable glove box and a lockable storage compartment behind each seat with room for a full-face motorcycle helmet or a very small backpack, but not both.

If you didn’t know better you would think the Slingshot is a low, open car. But it’s not a car. There are shoulder belts and seat belts for each seat, but no airbags, no doors or windows, and no roof. Slingshots do not meet U.S. light vehicle safety standards nor are they required because the feds classify the Slingshot as a motorcycle.

We published a full review of the 2016 Slingshot SL in that year, so we’re already familiar the vehicle which is the same in most respects.

Whether you race around hills or crawl in traffic, the fun factor never goes away.

We were most interested in one factor in our current testing: rear wheel traction. The 2016 Slingshot SL’s rear wheel broke loose too easily when we accelerated moderately hard, especially in first and second gear. Rear wheel traction was our only significant complaint in 2016. Our specific mission this year was to see if the 2018 Slingshot’s’ rear wheel gripped the road better than the 2016 model.

Though our review is based on a day of driving 2018 models, we also drove a 2017 model for comparison. The driving conditions were ideal for both attention-seekers and open-vehicle performance lovers.

The quick answer to the traction question? The 2018 Slingshot’s rear tire grips the road better than previous year’s models, but one new model in particular was outstanding.

The 2018 Slingshots have a broader price range than last year. A new glove-friendly Ride Command infotainment system entertains you and keeps you informed about the vehicle and a version with navigation helps you reach your destination. A new hardtop option helps cut sun and wind exposure. Newly available Bilstein rear performance shocks are the most significant new feature from our perspective and answer our earlier traction concerns.

The Slingshot performance boost for 2018 comes from 10-way adjustable Bilstein rear shocks. The Bilsteins shocks were the magic sauce that made all the difference in our testing. The Bilsteins are standard only on the high-end Slingshot SLR LE.

We drove 2018 Slingshot SLR and SLR LE models and a 2017 Slingshot SLR for direct comparison. We drove in stop-and-go traffic (because southern California) and through the Malibu Hills. To test the new Slingshots’ performance, we also had a glorious two hours blasting on a twisty Malibu Hills road segment. To keep us out of trouble (jail), we were accompanied by California Highway Patrol officers who closed off the roads for us during the “blasting” sessions.

If you’re attracted to the Slingshot because you want to be noticed, the Slingshot delivers every time. We saw loads of big smiles, thumbs-ups, people taking smartphone photos, and minivan drivers with obvious vehicle envy in bumper-to-bumper traffic on the Pacific Coast Highway. When we stopped for lunch, people practically lined up to take selfies in front of the Slingshots — with ten Slingshots in our group there was ample selfie-scape.

The greatest change in performance we noticed with the 2018 models was with the SLR LE equipped with 10-way adjustable Bilstein shocks. You can still catch rubber in first and second or with quick downshifts in any Slingshot. We were more concerned with the tail end slipping loose on fast curves and corners and the Malibu hills were a perfect place to test rear wheel stickiness.

I first drove the top model Slingshot SLR LE with its Bilstein shocks and 305mm rear tire on a course with four turns, each with different radii. We drove sets of multiple laps going in both directions. The SLR LE inspired confidence so I kept pushing it. It wasn’t hard to loosen the rear wheel blowing a half-donut to reverse direction at each end of the course, but I never felt the back wheel slip to the side going up or down the twisty curves as aggressively as my skills allowed.

The bottom line? If you want the Slingshot model with the best traction, buy the 2018 SLR LE.

When I switched to a 2017 Slingshot SLR with the 305mm rear tire but no Bilsteins for a comparison run, the difference was dramatic. The 2017’s rear tire broke loose much too easily when I drove it as hard as the 2018. The 2018 Slingshot SLR, also with the wide tire but not the shocks, felt subjectively tighter than the 2017 model, but definitely not as grippy as the SLR LE.

The 10-way adjustable Bilstein shocks can be added as a dealer-installed option to other 2018 models and to all earlier models. The upgrade costs $1,900 for parts plus the dealer’s labor charge.

With or without Bilsteins, the Slingshot is a blast to drive and easy to control. If you don’t habitually slide your car or motorcycle around curves you’ll likely never notice the difference with the standard shocks. If you’re looking for the best traction for spirited performance driving, however, the 2018 SLR LE is clearly the best bet.

At one point on the press ride I split from the group. To catch up, I pushed one button to turn the Ride Command system on and another to select navigation. The intuitive interface makes using Ride Command a breeze, although you can’t input your destination while moving. Taking advantage of the stop-and-go traffic I quickly had a moving map with the turn-by-turn directions I needed.

In our 2016 Slingshot SLR review, we were impressed by the three-wheeler’s high fun quotient. We appreciated that drivers can hop in and drive the very low, open-air attention-magnets with no special instruction. We weren’t impressed when the rear wheel lost traction with what we considered moderate throttle, but our hopes that Polaris had since found a way to harness the wild rear wheel were answered.

That is, if you were willing to pay around $31K for the fully loaded SLR LE trim. A 305mm, 2-inch wider rear wheel helped, but the biggest props go to the adjustable Bilstein performance shocks that are the standard issue only on the SLR LE. When we slung the new Slingshot around the Malibu Hills we were elated at the rear wheel’s stickiness. You can still break it loose if you try, but we were never surprised.

We drove a 2017 Slingshot SLR for comparison immediately after and within two turns were convinced to back way off what we could do with the 2018 SLR LE. Bottom line: every Slingshot ever made is fast and loads of fun, but the 2018 SLR LE with Bilsteins is fast, fun, and has much better rear-end grip.

We need more 7-passenger EVs, but the 2023 Mercedes EQS SUV has room to improve
Lux and refreshingly livable, Mercedes’ EQE moves EVs mainstream
2024 Chevrolet Equinox EV aims for affordability with $30,000 base price
Jeep is launching its first two electric SUVs in the U.S. in 2024
The Uber hack is an outrageous tale of a teen hacking for fun
Tesla to fix window software on 1M of its U.S. cars
How to watch Tesla’s AI Day tonight and what to expect
2023 Audi Q4 E-Tron first drive: the predictable and traditional EV SUV we need
Tesla AI Day 2022: Optimus, self driving cars, and everything else announced
Tesla hopes full self-driving beta will be out globally by the end of 2022
Elon Musk reveals first delivery date and customer for Tesla Semi truck
Nissan wants the 2023 Ariya to be its comeback EV, but the bar has been raised
2023 Kia Niro EV first drive review: Practical doesn’t have to bore you to tears