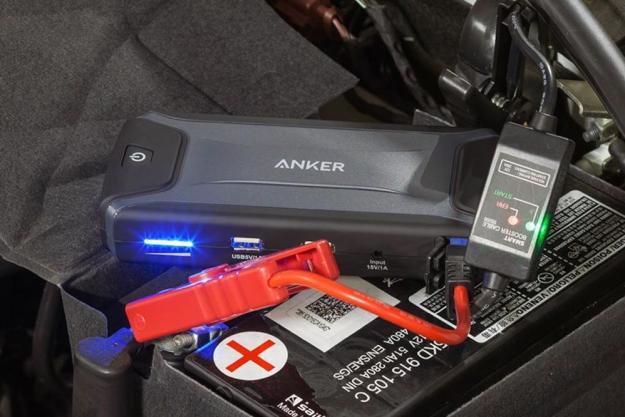 “The days of clunky jumper cables are gone, and the Anker Compact Car Jump Starter and Portable Charger is the best way forward.”

The morning commute through our Nation’s clogged highways often seems like navigating a field of battle. Where I live in Los Angeles you need to be ready for mechanical failure, unbearable highway construction, and cutthroat drivers. After all, you never know when the road can fight back and leave you stranded. A dead car battery and no way to call for help is the quickest way to put a damper on anyone’s travel plans. However, the folks at Anker have released the Compact Car Jump Starter and Portable Charger to try and calm your fears.

Will you be battered by the hazards of the road, or is this the solution to keep you charging ahead?

The Anker Compact Car Jump Starter and Portable Charger is priced around $80 and comes in a nice carrying case to help organize and store the various pieces included with the kit. In the case you will find the main battery pack unit, micro USB cable, jumper cable attachment, and both a 12 volt and wall charger to charge the battery pack via the input on the side.

The main battery pack stores 10,000mAh, which is enough to charge most tablets from 0 to 100 percent and bring the average smartphone back to life 3 to 5 times over. The pack has a nice plastic casing that has portions of soft plastic that help to grip the unit. The side features a blue LED meter to show the power level in 25 percent increments. One end has a power button, and a bright light lives on the edge nearest it. A rubber flap that reads “Engine Start” covers the plug where the jumper cable hookups connect with the battery pack.

Hold the power button down for one second to turn on the flashlight. Pressing the button once again alternates the LED to blink off and on or send an SOS distress signal. That should come in handy when the delivery guy has to find you in traffic — or any other desperate situation you may find yourself in.

A dead car battery and no way to call for help is the quickest way to put a damper on anyone’s travel plans.

The battery pack features two USB ports that are now both rated up to 5V/2.1A – an older version of the product had one 5V/2.1A and one low power 5V/1A USB port. In testing, the unit was able to charge a Samsung tablet and a Moto X (2014) rather quickly. From our results the unit’s charging output to a single device stayed around 1,600mAh. At this rate it charged my Samsung Galaxy Tab 3 (which has a big, 6,800mAh battery) at around 24 percent per hour and the Moto X (2,300mAh) closer to 65 percent in one hour. The charging slowed closer to 1,000mAh when both devices were charging at the same time and would occasionally favor sending more power to one device over the other.

In addition to keeping your phones and tablets charged and ready, this pack can also ensure that a dead car battery doesn’t leave you stranded. The 11-inch jumper cables included with the Anker Compact Car Jump Starter plug directly into the side and feature an inline green and red LED to tell you when it is ready. Operation is simple: Connect the cables to the positive and negative terminals on the battery and wait 5 seconds for the green LED to signal that it’s okay to start your car. A red LED and several beeps will indicate that it is time to disconnect the cables after about 30 seconds.

The power from the jumper pack is unfortunately only recommended to jump engine sizes up to 3.0L for gasoline cars and 2.5L for diesel engines. Your experience may vary depending on the car, but those numbers seem fairly accurate based on our research. We tested the unit on a 2.0L Nissan Sentra and a 2.4L Honda Element without any issues starting the cars on the Jump Starter alone. Operation was easy and the system will be familiar to anyone who has used ordinary jumper cables.

Over time the charge pack can suffer from degradation like any other battery and lose power — especially in severe temperatures. Anker recommends that you charge up the Compact Car Jump Starter and Portable Charger every three months to ensure power is there when you need it. This is important to remember, because In order to jump start a car the battery level has to be over 25 percent. You’d hate to be stranded on the side of the road because your kids used half the reserve power charging the tablet.

Flat tires and dead batteries are some of the most common reasons for automotive breakdowns, and also among drivers’ biggest fears. Most cars happen to be fitted with a method to get you moving again after a flat tire, but all lack a good way to handle a dead battery. Thankfully the days of the clunky jumper cables are gone, and the Anker Compact Car Jump Starter and Portable Charger is the way forward.

It has enough juice to keep your car on the road, with enough portability to keep your important devices running when you’re out of the car.