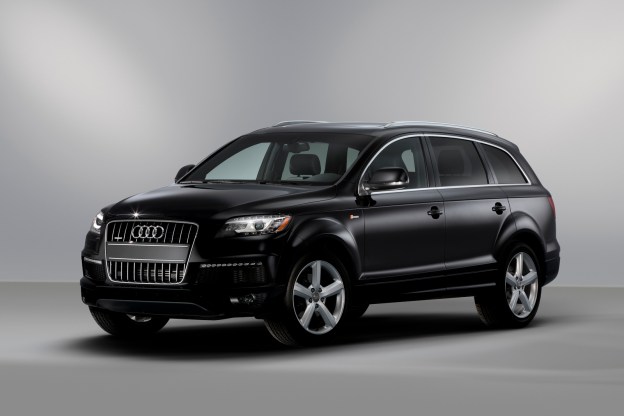 Audi is on a roll at this year’s Consumer Electronics Show (CES). The German carmaker has already unveiled a new infotainment system based on a modular NVIDIA Tegra processor, and futuristic tech like a 3D infotainment display and laser-equipped safety system. How do you top that? How about by cramming 24 speakers into an SUV?

Perhaps trying to match the MMI engineer’s 3D display, Audi’s sound engineers gave the Q7 Sound Concept “3D sound.” This system adds extra speakers (made by Bang & Olufsen, just like the stock Q7’s speakers) into the A-pillars, added an extra B&O amplifier, and finished off with software from Fraunhofer.

By moving the speakers higher, Audi hoped to get more even sound coverage. In a normal car, sound emanates from the front, rear, and sides of the passenger compartment, but since speakers are usually placed below the window line, the sound is only coming from below the passengers’ ears.

Since passengers in the Q7 Sound Concept are basically surrounded by speakers, they are supposed to get a more realistic, immersive experience. With all that hardware, it can also be a very loud experience.

The 3D sound system accepts accepts MP3, CD, and radio input, although it may require an adapter for wax cylinders.

Audi says 3D sound will be an option on upcoming production cars, but not until at least 2014. Like the current B&O system, it will be an extra-cost option on the Q7, A6, A7, and A8.