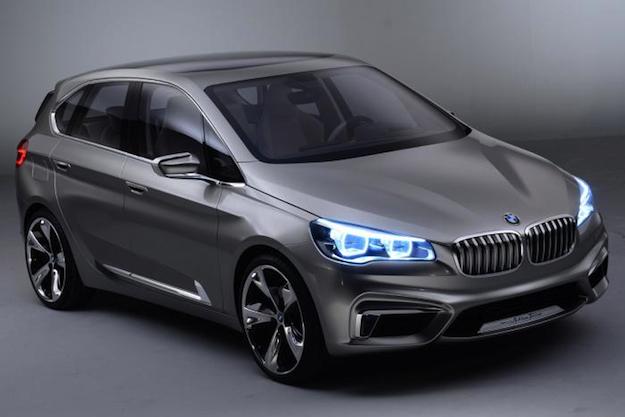 This is BMW’s Concept Active Tourer, which will make its official debut at the Paris Motor Show, and it’s a very important vehicle for the German manufacturer. Why? Primarily because the platform on which it’s built will go on to form the basis of the next-generation Mini, and a new range of entry-level BMWs in 2014.

Also, it’s the first car to showoff BMW’s new, super-frugal, three-cylinder, 1.5-liter turbocharged motor; plus the concept is a plug-in hybrid that uses the same system seen in the gorgeous BMW i8.

However, there’s another reason too, not that BMW will shout about it. The Concept Active Tourer is front-wheel drive. Yes, the three-cylinder engine powers the front wheels, and it paves the way for the first production front-wheel drive BMWs.

In fairness, BMW is easing us in gently, as the electric motor drives the rear-wheels, making the Concept Active Tourer four-wheel drive; except with 134 horsepower through the front wheels and only 67 through the rears, the bias is the opposite of the aforementioned i8.

Back to that petrol engine for a moment though. It’s mounted transversely rather than longitudinally, and is essentially the same as that in the i8; except here, the 1.5 turbo will produce 134 horsepower for a 0-60 time of less than 8-seconds and a top speed of around 120 miles-per-hour.

Economy is the order of the day, and when the petrol and electric motor — which has a standalone range of 19 miles — work together, BMW estimates a minimum of 113 miles-per-gallon while producing less than 60g/km of CO2. Cleverly, the hybrid motor talks to the satellite navigation, deciding between them which will be the most efficient way of driving on upcoming roads.

Features on the concept car include a “Cool Shade” panoramic roof, which has an active particle layer that goes from opaque to clear at the touch of a button, 20-inch rims, a color heads-up display and a 10-inch touchscreen control panel.

Aficionados may balk at the thought of a front-wheel drive BMW, raise their eyebrows at a transversely-mounted engine, and fondly recall a time when the company only used front-wheel drive in ads to mock its rivals. The move is a sign of the times though, as production costs will fall and BMW will be able to produce more small cars.

As for the Concept Active Tourer, it’ll eventually become a Mercedes B-Class competitor, and is almost certainly our first proper look at the previously rumored 1-Series GT.

Cruise’s robot taxis head to Arizona and Texas
2022 Volkswagen ID. Buzz first drive review: The iconic hippie hauler goes electric
We tested the self-driving Mercedes tech so advanced, it’s not allowed in the U.S.
We drove Mercedes’ hand-built EQXX concept, and it’s unlike any other EV
Uber says it’s investigating ‘cybersecurity incident’
Nvidia’s Drive Concierge will fill your car with screens
The Uber hack is an outrageous tale of a teen hacking for fun
Tesla to fix window software on 1M of its U.S. cars
Lux and refreshingly livable, Mercedes’ EQE moves EVs mainstream
How to watch Tesla’s AI Day tonight and what to expect
2023 Audi Q4 E-Tron first drive: the predictable and traditional EV SUV we need
We need more 7-passenger EVs, but the 2023 Mercedes EQS SUV has room to improve
Tesla AI Day 2022: Optimus, self driving cars, and everything else announced