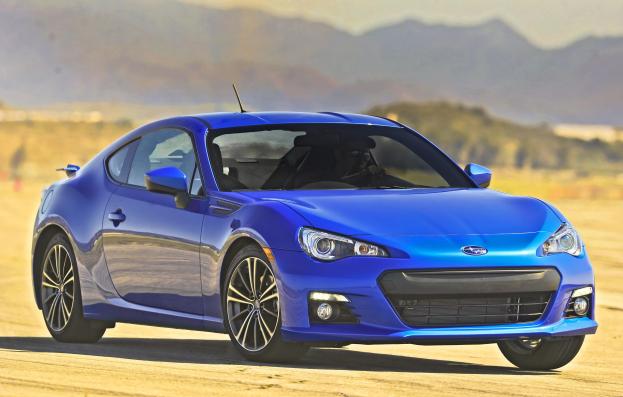 The ideal form of a sporty car is usually something sleek and loud, with a Ferrari or Porsche badge on the deck lid. Automotive fun doesn’t have to be expensive, though. Not every car can top 200 mph, but many are still fun to drive, and some can even serve as entertaining daily drivers. Here are ten great cars, five under $25,000, five under $35,000, that will make your morning commute more exciting.

With the Miata ($23,470), Mazda set out to build a 1960s British sports car that doesn’t leak oil like the Exxon Valdez. It succeeded, making a car that has been a bestseller for over 20 years. The Miata isn’t blindingly fast in a straight line, but few cars offer better handling than this compact, rear-wheel drive roadster.

The original hot hatchback is still going strong. The GTI combines the everyday practicality of a compact hatch with a 200 hp, turbocharged engine and six-speed manual or dual-clutch DSG transmission. It’s the perfect car for pulling lateral g while hauling groceries, and it starts at $23,000.

Don’t let its cute looks fool you, the Mini can be serious fun. Its micro size means go kart-like handling and a light curb weight, so the turbocharged, 1.6-liter engine doesn’t have much to push around. It’s basic, but the Cooper S gets down to the essence of what makes a car fun to drive, all for $24,000.

The Subaru-Scion twins bring some serious hardware to the party. A 2.0-liter Subaru boxer-four is married to Toyota dual injection (direct injection and port injection for the most efficient combustion), and placed in a compact (think hardtop Miata) rear-wheel drive body. With 200 hp and a meticulously-tuned chassis, either car should turn a winding road into a racetrack. The FR-S starts at $24,930; the BRZ is $1,335 more.

Hyundai’s 2+2 is a muscle car with a Korean twist. The Genesis has the proportions of a Mustang or Camaro, but with a turbocharged, 274 hp, 2.0-liter four ($24,250) or a 3.8-liter, 348 hp, V6 ($28,750). The Big Three’s muscle cars are legendary, but not every sports coupe needs to be an homage to ‘60s Americana. The Genesis is the perfect car for someone who wants the room of a four-seat coupe and the energetic character of a small, high-revving engine.

The classic American muscle cars of the 1960s were known for offering big power at a low price, and Ford’s 21st century Mustang GT does just that. The retro-styled ‘Stang is available with a 5.0-liter, 420 hp V8 for $30,300. If the FR-S and Miata are the handling champs, that V8 makes the Mustang the king at the drag strip. Who says the they don’t make them like they used to?

The Ford vs. Chevy rivalry continues with each company’s current “pony car.” The Camaro SS ($32,635) answers the Mustang GT’s 5.0 with a 6.2-liter, 426 hp V8. For enthusiasts who still believe that there is no replacement for displacement, this is an excellent motor. The star of Transformers also sports more sophisticated independent rear suspension. In the Mustang and Camaro, a corporate rivalry has created two great cars for performance enthusiasts.

Nissan’s evergreen Z Car takes the two-seat sports car game up a notch. The Z is powered by the 3.7-liter V6 Nissan uses in nearly all of its cars, in this case tuned to 332 hp. As it’s done since 1969, the Z continues provide cheap thrills that rival the blue blood sports car competition. It will do 0 to 60 mph in 4.9 seconds, faster than a Porsche Cayman but, at $33,120, it costs significantly less.

Most performance cars are bred on racetracks, but the WRX comes from backwoods rally stages. This rocket ship starts out as an all-wheel drive Impreza sedan or hatchback, then gets a 265 hp, turbocharged 2.5-liter boxer-four and some go-fast suspension and body modifications, all for $25,595.

If that’s not good enough, the $34,095 WRX STI packs 305 hp. Either way, the WRX combines serious performance (the STI does 0 to 60 in under five seconds) with the practicality of all-wheel drive and four doors. It’s a great car to drive that can get you home in a snowstorm, something no rear-drive car can claim.

The Subaru-Mitsubishi rivalry is just like the one shared by Ford and Chevy, except rally cars are the weapons of choice. Mitsubishi’s hot Lancer Evolution was the original rally car for the road, and is currently in its tenth generation. Like the WRX, the Evo is a four-door with all-wheel drive and a turbocharged engine. In this case, the engine displaces 2.0 liters and produces 291 hp. The Mitsubishi may have less power than the WRX STI, but it brandishes more technology, including an optional dual-clutch transmission and a Super All-Wheel Control system that adapts power output to different road conditions. The Evo slides under the $35,000 barrier at $34,495.

The best used cars under $15,000
The best sports cars
The best-sounding cars
The best hatchbacks
Uber says it’s investigating ‘cybersecurity incident’
Nvidia’s Drive Concierge will fill your car with screens
The Uber hack is an outrageous tale of a teen hacking for fun
Tesla to fix window software on 1M of its U.S. cars
Lux and refreshingly livable, Mercedes’ EQE moves EVs mainstream
How to watch Tesla’s AI Day tonight and what to expect
2023 Audi Q4 E-Tron first drive: the predictable and traditional EV SUV we need
We need more 7-passenger EVs, but the 2023 Mercedes EQS SUV has room to improve
Tesla AI Day 2022: Optimus, self driving cars, and everything else announced