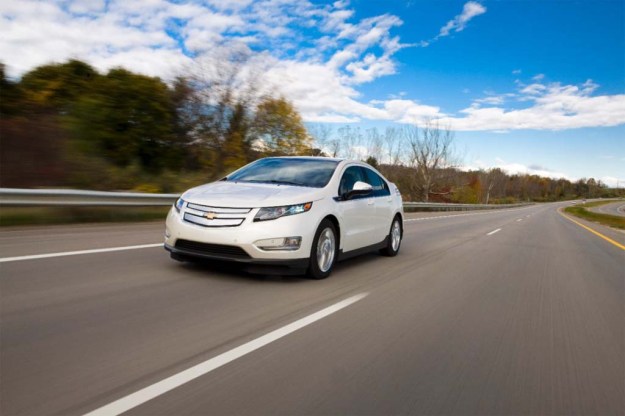 QR codes by and large are pretty lame. By the time you whip out your phone, open the app, and snap your pic, the desire to learn what’s hidden beneath those cryptic squares and dots has all but escaped you. Nevertheless, there are occasions when the oft-ignored technology actually comes in handy, like, say, stickered to your nifty new Chevrolet Volt.

But don’t just take my word for it, 2013 Chevrolet Volt owner and Gigaom journalist Kevin Tofel thinks Chevy’s use for those dust-ridden QR codes is a smart move, too. While Tofel recently explained he doesn’t mind touting the merits of his eco-conscious set of wheels, stating that the QR codes help address people’s misconceptions about the car, its large battery, and gas generator. What’s more, he doesn’t have to be around to explain it; people can just walk up to the vehicle and scan the code.

EPA mandates have already made QR codes commonplace for 2013 car stickers, but in an effort to educate new owners further — and to spread the Volt love to people they communicate with on a daily basis — Chevy has taken to using the bite-sized billboards as a mobile source of promotion, sending drivers of the plug-in hybrid Owners Kits, consisting of among many things  a hardcover book chronicling the Volt from concept to production, 10 small ‘Volt business cards’  to give out when people ask about the car, and of course a QR sticker for your Volt.

It might not seem like a stroke of marketing genius, but Chevy’s move is nonetheless brilliant. During my recent review of the 2013 Chevrolet Volt I was often asked by friends, family members, and random strangers about the politically charged plug-in hybrid. Is it electric? Does it run on gas? How much range does it have? Does it enjoy long drives on the beach? All great questions and ones I was happy to answer. But as much as I loved hearing the sound of my own voice surely there is a better way?

Turns out, there is. Instead of simply scanning the code and being sent directly to Chevy’s website, the QR code sticker being mailed out sends curious onlookers directly to a YouTube video that explains many of the Volt’s features; everything from how the powertrain works (a combination of both all-electric and gasoline); how far the range is on a single charge of its battery; and how long it takes to charge. The video also points out that the Volt is incredibly fun to drive, a sentiment I agree with wholeheartedly.

Chevy’s Volt video is only available in 360p resolution, meaning it might not overwhelm the visual senses, but it won’t sap your data plan either.

Topics
Tesla invests billions in U.S. gigafactory to boost Semi production
2024 Polestar 2 gets a major overhaul for the 2024 model year
Beware of this EV with pitiful charging speed — and others like it
Electric trucks aren’t ready for the big leagues — but I still loved the F-150 Lightning
What is a Tesla Supercharger?
Rivian adds Snow Mode through software update just in time for winter
Tesla used car market no longer as lucrative, data shows
What to expect at CES 2023, from mondo TVs to EVs
Kia EV6 GT first-drive review: putting a little more fun into EVs
How to charge your electric car at home
2023 Tesla Roadster: release date, specs, rumors, and news
VW previews its next electric car in trippy camouflaged form
Chrysler Synthesis demonstrator brings more screens and software to vehicle cockpits