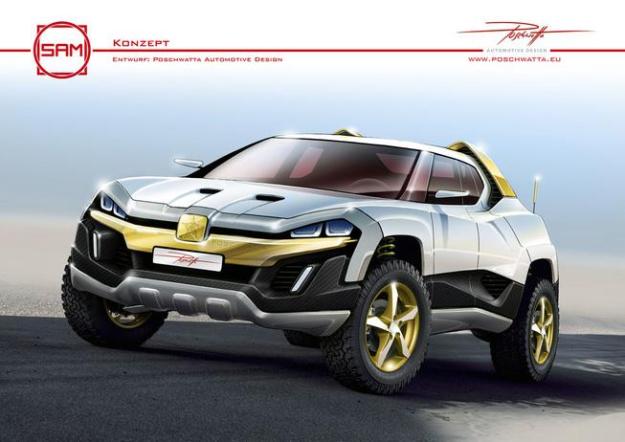 Latvia isn’t on most people’s radar when it comes to desirable automobiles but, if the country can churn out extreme vehicles like this Nagel Dakkar, maybe it should be. The Dakkar’s creator, Dartz, says it is not just a radical take on SUVs, but a whole new category of vehicle.

The Nagel Dakkar has a lot to live up to. It’s named after Andrew Nagel, a Russian pilot who won the 1912 Monte Carlo Rally and supposedly drove across the Sahara. Speaking of Sahara, the Nagel’s second name refers to the legendary trans-African Dakkar Rally.

Based on the sketches released by Dartz, the Nagel Dakkar looks ready to tackle any rally. The aggressive bodywork, with some exposed carbon-Kevlar and huge side air intakes, makes a Porsche Cayenne look like a school bus.

The Nagel Dakkar will be 193 inches long, 78 inches wide, and 66 inches tall, so it will be nearly the same size as Porsche’s SUV.

Underneath the carbon-Kevlar body is an equally racy chassis. The Nagel Dakkar rides on a tubular frame, designed by Saxon Automobile Manufactur, similar in design to the ones used by off-road race trucks.

The Nagel Dakkar will be powered by a twin-turbocharged V8 from Mercedes-Benz AMG; probably the 5.5-liter engine used in all of AMG’s new models. In the Dakkar, that engine will produce an astounding 650 horsepower and 626 pound-feet of torque. An SL63 AMG’s engine produces 557 hp and 664 lb-ft.

The power will be harnessed by a seven-speed dual-clutch transmission, likely sourced from AMG as well. Dartz did not record a 0 to 60 mph time but, given the Nagel Dakkar’s lightweight body and weapons-grade engine, expect it to be fast. Like the AMG models it borrows that engine from, the Dakkar will be electronically limited to 155 mph.

“Wealthy people need personalized cars. There are tens of bespoke sportscar makers but there are zero bespoke SUV makers,” Dartz said in a statement. They have a point: lovers of roadgoing performance have Ferrari, Lamborghini, Porsche, and Pagani, but what do off-road enthusiasts have? The Nagel Dakkar looks like a more serious SUV than the Cayenne, or even Lambo’s upcoming Urus, both of which are more focused on pavement anyway.

However, there may be a reason for that. Road-going supercars are already hopelessly impractical; demand for a high-performance luxury off-roader will be even slimmer, limited to people with the funds to spend more than $400,000 on a toy and who are willing to get their designer clothes dirty. Still, supercars (and SUVs) shouldn’t make sense, they should be fun, and the Nagel Dakkar looks like it will deliver.