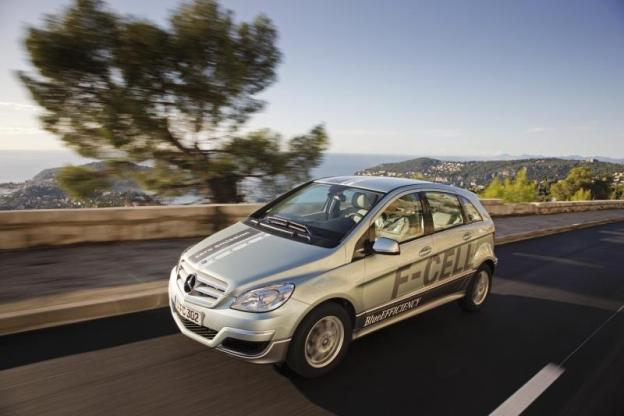 A group of automakers have teamed up with the U.S. Department of Energy as part of a collaborative effort to support more fuel cell cars in the U.S.

According to Automotive News, Hyundai Motor Co., Daimler AG’s Mercedes-Benz unit, Nissan Motor Co. and Toyota Motor Corp. have joined the U.S. Department of Energy to form a partnership to focus on the development of hydrogen fueling infrastructure.

The public-private partnership, named H2USA after the chemical symbol for hydrogen, is aimed at making fuel cell vehicles a more viable option for consumers in the US.

“By bringing together key stakeholders from across the U.S. fuel cell and hydrogen industry, the H2USA partnership will help advance affordable fuel cell electric vehicles that save consumers money and give drivers more options,” David Danielson, an assistant secretary at DOE, said in a statement, as reported by Automotive News.

Much like electric cars, fuel cell vehicles are powered by an electric motor. However, instead of storing power in the batteries, fuel cell electric vehicles convert natural gas or hydrogen into electricity using a chemical process inside a fuel cell that produces an electro-chemical reaction to produce electricity, as explained by NextGreenCar. Fuel cell technology is not new and has been used for decades in the U.S. space program.

Considered by many to be more efficient than even electric vehicles, fuel cells aren’t limited by the dynamics of thermodynamics, notes NextGreenCar, which enables them to achieve higher conversion efficiencies than conventional engines that only make use of 20 percent-25 percent of the fuel’s energy (as in gas-powered cars) – fuel cells can achieve up to 60 percent.

However, unlike a battery the reactants – fuel and oxygen – have to be continually supplied for an electric current to be produced.

Fuel cell vehicles have been known to have a driving range of up to 240 miles or more.

To date, the technology has been significantly hampered in the U.S. by a lack of natural gas or hydrogen infrastructure (gas stations) and the high cost of the vehicles. The CEO of Volkswagen has even gone so far as to say FC vehicles have no future.

According to Automotive News, the only fuel cell electric vehicles currently sold in the US are Honda’s hand-built FCX Clarity, which costs nearly $1 million per unit to build, and the limited Mercedes B-Class F-cell, which when it was first introduced in California in 2014 was available for a three year lease at $849 a month.

Not exactly pocket change by most standards.

Toyota has said with a substantial cut in production costs that it could introduce a fuel cell vehicle in 2015 that will cost consumers around $100,000.  But you have to wonder who would even be willing to pay that much for one of the vehicles.

We drove Mercedes’ hand-built EQXX concept, and it’s unlike any other EV
Ford recalls 100,000 hybrid cars over fire risk
This EV charging tech does the job as you drive
Why do EVs charge slowly? Lithium battery limits explained
Jeep is launching its first two electric SUVs in the U.S. in 2024
2024 Chevrolet Equinox EV aims for affordability with $30,000 base price
Cruise’s robot taxis head to Arizona and Texas
Uber says it’s investigating ‘cybersecurity incident’
Nvidia’s Drive Concierge will fill your car with screens
The Uber hack is an outrageous tale of a teen hacking for fun
Tesla to fix window software on 1M of its U.S. cars
Lux and refreshingly livable, Mercedes’ EQE moves EVs mainstream
How to watch Tesla’s AI Day tonight and what to expect