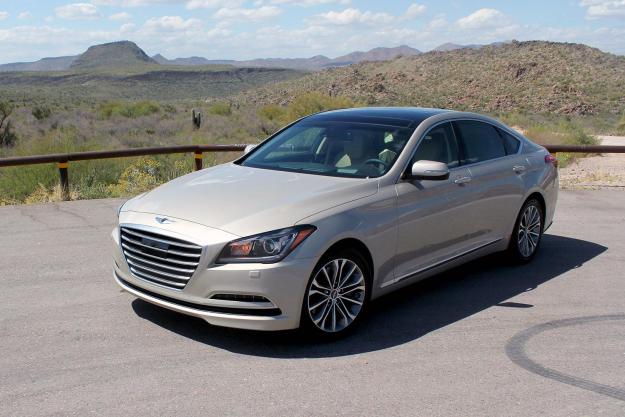 “The Hyundai Genesis is a rare beast in today's car market: a pure luxury car. And, thanks to the focus on luxury over performance, it can be a bargain, too.”

I stood at the gas station around the corner from my house, waiting for the Hyundai representative to fetch some paperwork so I could head home in the 2015 Hyundai Genesis. As I stared off into space, a young woman approached me. She asked to use my phone so she could call a friend.

After glancing down to see 7 percent battery life remaining, I reluctantly agreed. As she took the phone, she glanced over at the Genesis perfectly coated in Empire State Gray paint and then back at me. Something in her demeanor changed. She smiled, adjusted her low cut shirt, and said, “Nice car, can I get a ride?”

Frankly I could end the review here, because this interaction so strongly resembles an NFL halftime car commercial that I wonder if the young woman was a Hyundai employee incognito. It also underscores the success of the new Genesis, which looks every inch the exclusive luxury car … but the price tag of which begins at a mere $39,000.

When I first drove the Genesis at its launch in Arizona, I kind of missed the point. I had gone in hoping and expecting to find a BMW 5 Series-beating sports sedan. For better or worse, that simply isn’t what the Genesis’ purpose.

The big Hyundai is much more like a pre-AMG era Mercedes than a BMW 5 Series-fighter.

Instead, the big Hyundai is much more like a pre-AMG era Mercedes. The focus is on comfortable and exclusive transportation, not spine-bending speed. The second time around, I was able to take my time and see what the Genesis has to offer.

On the surface, the Genesis’ interior checks all the luxury car boxes, but lacks flair. As a place to live with, though, it is top notch. Even on the base model, passengers are cocooned in massive leather seats that have more in common with high-end recliners than they do ordinary car seats.

Every Genesis also comes wrapped in premium materials normally horded in heavily guarded German design studios. Drivers and passengers alike are surrounded by gorgeous matte wood, silky aluminum, and a dash with more soft-touch materials than the next two Genesis competitors combined. There is even the inevitable analog clock.

For the digitally minded, there is Hyundai’s new BlueLink infotainment suite. To read more about it, check out our full review.

Honestly, I am not sure why anyone would spring for more expensive models of the Genesis, as the base vehicle came with everything a driver could possibly want, except a sun roof and radar guided cruise control.

What impressed me most was how well all this held up. My press demonstrator had seen 11,000 hard miles at the hands of journalists, and the interior was still nearly pristine.

Wait, is that a Hyundai?

The interior may be the sort of conservatively styled environment that will make dentists and insurance salesmen feel at home. The exterior, however, features some striking bling.

The front end features a grille large enough for an 18-wheeler. Unlike some automakers – Acura, I am looking at you – Hyundai has kept its new fascia tasteful and modern. The grille is neither offensively chromed, nor objectionably old-timey. Instead, it is literally highlighted by handsomely sculpted headlights and LED running lights.

The rear is less interesting, but features similarly excellent lighting design, with taillights made up of distinct LED light bars.

The theme of excellent and distinctive lighting is carried over into a ridiculous or – depending on perspective – ridiculously awesome feature. If the driver approaches the Genesis with the key fob in his or her pocket at night, the car activates puddle lamps embedded in the wing mirrors. These lamps illuminate the doors and boldly display the word “GENISIS” alongside the winged logo. It may be a bit much, but it does make the car a bit more distinctive, and a bit more fun.

The 11,000+ miles also hadn’t dented the tomb-like silence of the Genesis’s ride. In fact, the massive recliner impersonating a driver’s seat provides for one of the most relaxing driving experiences that can be found under $100,000.

Unfortunately, the Genesis has something of a one-track mind. If the driver wants relaxation, it is more than happy to accommodate. If a more spirited outing is desired, that is a different matter.

The problem isn’t the power. My base press demonstrator boasted a 3.8-liter V6 with 311 horsepower 293 pound-feet of torque that drove the rear wheels by way of an eight-speed automatic. This set up gives the Genesis plenty of power for around town driving with enough left over for surprisingly quick passes – all accompanied by a satisfying growl. Though my demonstrator didn’t have it, I can report that the V6 proves impressive even when paired with an excellent H-Trac all-wheel drive system.

For those wanting a bit more, Hyundai offers an optional 5.0-liter Tau V8. This beefy motor puts out 429 hp and 376 lb-ft. Both are good engines. Yet neither of these powertrain’s can overcome the staid suspension or, for that matter, the Genesis’ massive bulk.

With either powerplant, the Genesis tips the scales at more than 4,000 pounds. That is a lot of bulk to move around, especially with a suspension that really wants to protect the driver’s back.

I can’t promise that Genesis ownership will cause scantily clad women to approach and ask for a ride.

Under hard cornering, the Genesis experiences a lot of body roll. Worse still, even in Sport mode and the traction control off, the stability control fights aggressively to keep the rear end from coming loose. The combination of body roll and the rear brakes unexpectedly jabbing at the wheels to keep them in line hardly makes for a peak motoring experience.

Add in a transmission that prizes smoothness over quickness, and the overall feeling is one of a car constantly fighting its own natural oversteer tendencies.

So rather than treat the Genesis like a drift car, a driver is far better simply ease back in the seat, pop the transmission into automatic, and relax … at least, until it’s time to pass.

I can’t promise that Genesis ownership will cause scantily clad women, or men for that matter, to approach and ask for a ride. In fact, I am not entirely sure I believe it happened to me. Yet, I can say that the Genesis is a true luxury car.

It may lack the ultimate power and speed of its German rivals. When compared to the uncomfortable compromise of cars like the Acura TLX, however, the big Korean seems like an excellent option for people seeking a refined driving experience on a budget.