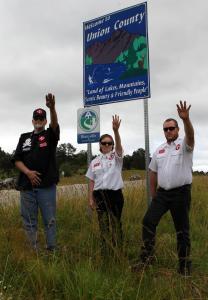 The first amendment can be a tricky beast at times. While the freedom of speech and the right to assemble serve as pillars of the American experiment, they aren’t always easy to bear when groups or individuals possess diverging opinions and views that threaten or attack those of our own.

And despite our best intentions as a nation and society to uphold the virtues and ideals of our founding fathers, we don’t have a roadmap to success for dealing with every volatile issue that arises. Though, legislators in Georgia may be wishing one such roadmap existed as the state is currently engaged in debate over whether or not to allow the Ku Klux Klan the right to adopt a stretch of roadway near the North Carolina border.

While the Klan insists that it wants to simply clean up the roads, other groups have already begun to petition the state in order to deny the application outright. And it looks like they have won, for now.

The Associated Press reports that Transportation Department officials met with lawyers from the state Attorney General’s office on Monday in order to determine the best course of action.

In a statement issued by the Transportation Department on Tuesday, officials said it would deny the KKK group’s application on the grounds that the “Adopt-A-Highway” program was aimed at “civic-minded organizations in good standing.”

“Participation in the program should not detract from its worthwhile purpose,” the department’s statement reads. “Promoting an organization with a history of inciting civil disturbance and social unrest would present a grave concern to the department. Issuing this permit would have the potential to negatively impact the quality of life, commerce and economic development of Union County and all of Georgia.”

Of course, there are many that would swiftly move to dismiss such an application, and believe Georgia should do so as well, especially when taking into consideration the Klan’s long history of extremism and an even longer history of violence. But simply denying the Klan’s application to adopt the road may not be so cut and dry.

In 2005 the U.S Supreme Court rejected the state of  Missouri’s attempt to turn down a controversial group’s application, saying membership in the program could not be denied because of a group’s social and political alignments. A similar case occurred in Kentucky where the the states transportation department ultimately accepted a white-separatist group’s contract to participate in the state’s highway cleanup program, fearing an unsuccessful and protracted legal battle.

While the state of Georgia has turned down the Klan’s application for its “Adopt-A-Highway” program, it may very well endure a lengthy and expensive legal tussle should the Klan pursue legal action. One in which it would likely lose given recent legal precedent and the United States constitution’s inalienable right to freedom of speech — a right that even extends itself to groups known for spouting vitriol such as the KKK.

U.S. automakers were leading targets of hackers in 2018, FBI says

Legroom for days: Infiniti’s 2015 Q70L is longer than before … but less hybrid-y