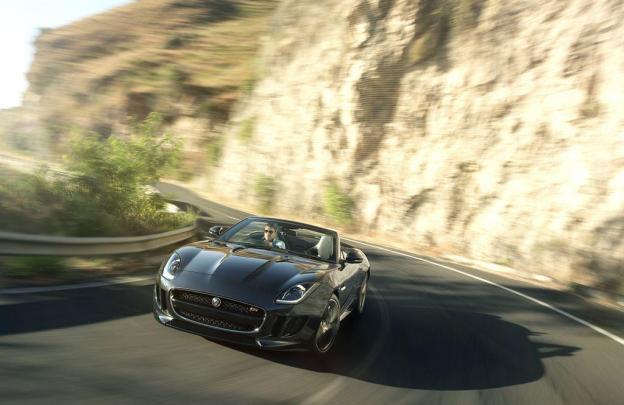 The Jaguar F-Type looks like the perfect sports car, but it isn’t. It may have powerful 5.0-liter V8 and 3.0-liter V6 engines, and a svelte body, but it lacks a crucial piece of hardware: a manual transmission. That would really make it perfect.

Luckily, Jaguar is rectifying that with plans to offer a stick shift on the F-Type and other models. At the other end of the spectrum, Jaguar is reportedly looking into nine-speed automatics for future models.

“Sports cars need a manual transmission for sports credibility,” Jaguar global brand director Adrian Hallmark told Autocar. This is a major shift (no pun intended) for Jaguar, which hasn’t offered a manual on any of its models in years. Hallmark said the company’s new transmission will have “a minimum of six speeds.”

While manual transmission have been abandoned by Ferrari and are fading fast at Lamborghini, it just wouldn’t seem right for the F-Type to go clutchless. High-tech supercars might need the faster shift times and general precision of an automated transmission, but it’s a different story in less-intense sports cars like the new Jag.

The F-Type is as much about the driving experience as it is about impressive numbers, so keeping the driver involved is important. It’s why it is impossible to imagine a Corvette or 911 without a stick shift. Porsche is no stranger to technology, and its PDK dual-clutch transmission is much faster than a manual. Still, the company developed the world’s first seven-speed manual for the 991-series 911. That speaks volumes about the manual’s importance to driving enthusiasts.

Jaguar may even offer manuals in other models. Hallmark said he company would never put a stick shift in its full-size XJ flagship, but manual XF sedan is a possibility. The would definitely help make the XF’s case as a sporty alternative to the BMW 5 Series, practically the only other midsize luxury sedan with a stick.

At the other end of the transmission spectrum, Hallmark confirmed that Jaguar and corporate sibling Land Rover will pursue nine-speed automatic transmissions from ZF for future models, which begs the question of how many speeds a car can have before people start confusing it with a bicycle.

The nine-speed will replace the eight-speed ZF automatics offered in most of Jaguar and Land Rover’s 2013 models, including the XF, XJ, and Range Rover. The new ZF transmission will also find its way into future Fiat and Chrysler products.