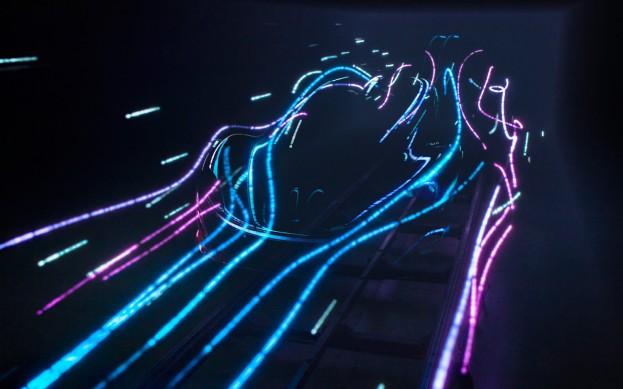 It may look like the good people at McLaren were having too much fun with glow sticks, but this light sculpture actually represents the company’s next supercar, a possible successor to the legendary F1. That car will debut in a more tangible form later this month at the Paris Motor Show.

McLaren has a hit on its hands with the current MP4-12C, but this race team-turned car builder wants to top it with a faster, more exclusive model. If the MP4-12C was meant to compete with “normal” supercars like the Ferrari 458 Italia and Lamborghini Gallardo, the new McLaren will take on its rivals flagships, including the Lamborghini Aventador and the upcoming Ferrari F70 and Porsche 918 Spyder.

Such a car will bring McLaren back to where it started in car production. In the 1990s, McLaren built the F1, which was the fastest production car in the world until 2005, achieving a top speed of 240.1 mph.

The F1 sported a 6.1-liter BMW V12, which churned out 627 horsepower; McLaren’s new car will need a weapon of that caliber to take on the best from Ferrari and Lamborghini both of which brandish V12s in their flagship cars. The F1 had a six-speed manual transmission, although paddle shifters seem more likely given the high-tech nature of the current MP4-12C.

Other F1 features that may not make it to the new car include three abreast seating, with the driver in the middle of the car, and an engine compartment lined with gold. Some of the new McLaren’s buyers may do that themselves, though.

So what will the new McLaren be like? Since we don’t have much to gone on besides a Lite-Brite display, it’s hard to say. Based on the curve of the front bumper and the silhouettes of what appear to be headlights, the new car will bear a familial resemblance to the MP4-12C. However, the windshield appears to be farther forward, a possible reference to the F1’s cab-forward profile.

Whatever it looks like, the prospect of a new supercar from McLaren is an exciting one. The original F1, McLaren-Mercedes SLR, and MP4-12C show that this company knows how to apply technology to making a car go fast.

The potential F1 successor will be unveiled on September 27 at the Paris Motor Show. It may not glow in the dark, but it will definitely be eye-popping.

Less weight and more power make McLaren’s 600LT the perfect track toy
814-horsepower McLaren Senna GTR can only be unleashed on a racetrack
McLaren shares its proven recipe for the ultimate supercar
This gamer raced past the competition to become McLaren’s F1 simulator driver
Uber says it’s investigating ‘cybersecurity incident’
Nvidia’s Drive Concierge will fill your car with screens
The Uber hack is an outrageous tale of a teen hacking for fun
Tesla to fix window software on 1M of its U.S. cars
Lux and refreshingly livable, Mercedes’ EQE moves EVs mainstream
How to watch Tesla’s AI Day tonight and what to expect
2023 Audi Q4 E-Tron first drive: the predictable and traditional EV SUV we need
We need more 7-passenger EVs, but the 2023 Mercedes EQS SUV has room to improve
Tesla AI Day 2022: Optimus, self driving cars, and everything else announced