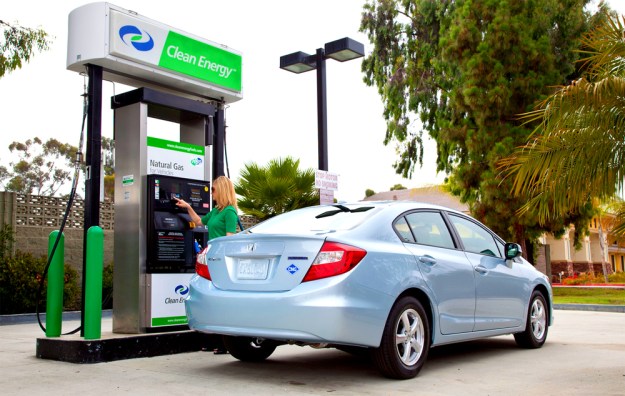 When people talk about alternative fuels, electricity and hydrogen usually dominate the discussion. Yet there is an alternative to those alternatives that doesn’t require exotic technology and is available right now. Compressed natural gas (CNG) can power an internal combustion-engined car with relatively minor modifications, with almost no difference in fuel economy or performance.

Don’t jump the CNG fence just yet, though. Its green benefits could be offset by a dirty drilling process, and finding a CNG filling station, or a CNG-compatible car, could take some doing.

Compressed Natural Gas is stored under pressure (which can vary depending on the application) while remaining in a gaseous state. It’s different from Liquefied Natural Gas (LNG), which is pressurized (and cooled) until it changes from a gas to a liquid.

The natural gas used as fuel is mostly methane, although smaller amounts of other compounds can be present. Like gasoline or diesel, it falls into the hydrocarbon family.

Natural gas comes from two major sources. It can be extracted as a byproduct of the crude oil refining process, or it can be mined directly from the ground. Oil wells sometimes produce natural gas, but the method that most people are familiar with is hydraulic fracturing (fracking).

Fracking involves freeing gas from porous shale rock with pressurized water and chemicals. It’s both touted as a way for the United States to gain energy independence, and maligned as a hazard to the environment.

How does a CNG car work?

Remarkably like a regular car. The biggest difference is the fuel tank. Since CNG is stored as a pressurized gas, the tank is much larger than normal. The gas is stored at 3,600 psi, then reduced to 125 psi by a regulator before being shot into the fuel system. After that, it’s good ole’ internal combustion. The driving experience is reportedly identical to that of a conventional car, although filling up at the pump takes twice as long.

Despite coming from the same place, CNG is considered a green energy source because burning it emits fewer greenhouse gases than gasoline or diesel. The Environmental Protection Agency says natural gas can cut carbon monoxide emissions by 97 percent, and nitrogen-oxide emissions by 35 to 60 percent. It also produces fewer carcinogenic pollutants and leaves smaller amounts of particulate matter.

There’s a caveat, though. Like electricity, natural gas may be clean, but the way it is produced may not be. In addition to concerns over fracking, a recent report in Nature stated that methane leaks from natural gas wells could increase pollution.

Natural gas does have a clear national security benefit. The Environmental Protection Agency says 87 percent of natural gas consumed in the U.S. is produced here, so it could potentially help lessen oil imports.

Natural gas is also cheap. A Department of Energy report covering September and October 2012 (the most recent data available) put the price of CNG at $2.12 per gasoline gallon equivalent (gge), compared to $3.82 per gallon for gasoline and $4.13 for diesel.

Drivers of CNG vehicles have to deal with range anxiety, although not as acutely as electric car drivers. Honda says a CNG -fueled Civic can drive 220 to 250 miles on one tank, which should provide more than enough range for daily driving. However, filling up may be difficult, depending on where you are.

According to the Department of Energy, there are 558 CNG stations in the U.S. Most of them are in California, Oklahoma, or along the Boston-Washington, D.C. corridor. Apps like Green-Driver ($1.99 on Google Play) or GreenFuel ($1.99 on the iTunes App Store) can help locate the nearest station.

Since most of these stations cater to fleet users, they may send you a monthly bill instead of allowing you to swipe your credit card onsite.

One possible solution is to install a home filling station, for around $5,000. You’ll never be far from a fill-up, but these low-pressure systems can take hours to refill a tank.

Finding a car that will run on CNG

If you want a brand new car that runs on CNG, you have one option: the Honda Civic. On sale to the public since 2005, the Civic Natural Gas is kept in production primarily because Honda thinks it can apply the technology to hydrogen fuel cells. There are other options, but they involve some compromise.

First, the Civic. Available only as a four-door sedan, it costs $27,065, making it the most expensive iteration of Honda’s compact. For that price, buyers get a 1.8-liter inline four with 110 horsepower and 106 pound-feet of torque, compared to a gasoline Civic’s 140 hp and 128 lb-ft.

Buyers also get about the same fuel economy as a gasoline Civic. The Civic Natural Gas returns 27 mpg city and 38 mpg highway, according to the EPA. A regular Civic sedan with an automatic transmission returns 28 mpg city and 39 mpg highway. This green car is all about lowering emissions, not saving its owner money.

Drivers willing to mix their CNG with conventional fuels can also opt for a big truck. Ford, General Motors, and Ram offer bi-fuel versions of their F-Series Super Duty, Chevrolet Silverado,/GMC Sierra HD, and Ram 2500 HD, respectively. These trucks have two fuel systems, and can switch back and forth on demand.

Since CNG vehicles use the same fuel system components as regular vehicles, it’s also possible to convert a gasoline car to run on CNG. That process costs between $2,000 and $4,000, according to the Department of Energy. Don’t try to do it yourself, though: vehicle fuel systems are regulated under the Clean Air Act, so incorrect modifications could void a car’s registration and lead to a big fine.