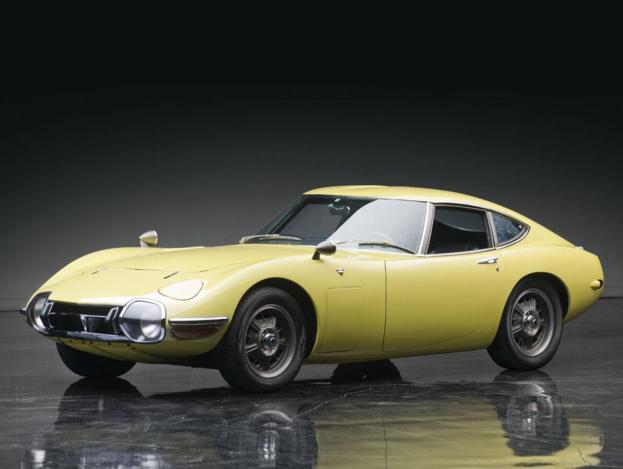 Would you pay nearly $1.2 million for a Toyota?

Someone at RM Auctions did, setting an auction sale record for a car from an Asian manufacturer. However, this wasn’t your grandmother’s Camry.

If a supercar from the company known for the dowdy Camry and Lexus RX seems like a stretch today, imagine what it was like in 1965, when Toyota unveiled the 2000GT at the Tokyo Motor Show, surrounded by cars that pretty much were toys in comparison.

Nothing like the 2000GT had ever come out of Japan, whose cars had the reputation Korean cars of the 1980s and 1990s had: basic, cheap and maybe a bit suspect.

Taking a quantum leap forward, Toyota married a sleek body (that bore more than a passing resemblance to the Jaguar E-Type) with a 150 hp, Yamaha-designed 2.0-liter straight six and then-innovative features like disc brakes and rack-and-pinion steering.

A roadster version also starred in the James Bond film You Only Live Twice.

On top of that, the 2000GT sold at RM was one of just 62 left-hand drive versions made. Rarity is a great way to drive up a collector car’s selling price, but this 2000GT’s selling price is still surprising.

There are many 1960s Japanese cars that can be called “collectable,” but they don’t usually attract the same insane bids as vintage contemporaries from the United States or Europe.

In addition to the 2000GT, there are the many early generations of Nissan Skyline GT-R, as well as the Cosmo, Mazda’s first rotary-powered sports car. They’re all great cars, but they don’t inspire the same passion as a pristine Yenko Camaro or Austin Healey 3000.

Just as when they were new, vintage Japanese cars have had to play some catch-up in the collector arena. Now that a Toyota 2000GT has sold for the price of a small country, it seems they’ve caught up.

Toyota could also learn something from this car. In the time it’s taken for the 2000GT to go from new car to collector car, Japan’s largest carmaker has, in a way, stayed put.

When Toyota unveiled the Lexus LFA, it was just as unbelievable as the 2000GT. This time, the company’s technical expertise wasn’t in question, but its will to push the limits of that expertise was. Today’s Toyota doesn’t have to take risks, so it doesn’t.