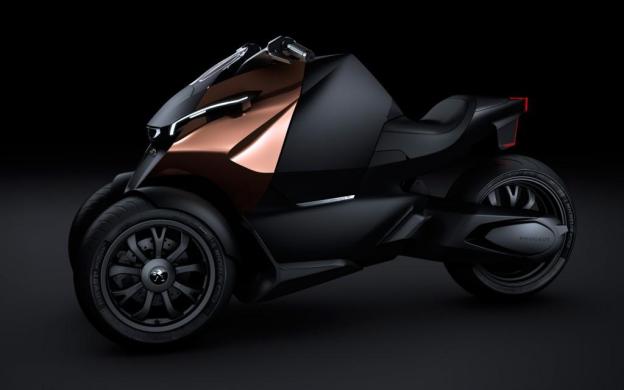 As concept cars go, the Peugeot Onyx is especially good at getting attention. Its carbon fiber and copper body, draped over a racecar’s diesel hybrid powertrain, is hard to top. Peugeot has no plans to put the Onyx into production, but it felt the design worked so well that it decided to build an Onyx-inspired scooter and bicycle.

The scooter, called the Onyx Megatrike, looks like it came from the future. It has the same angular lines and copper panels as the Onyx supercar, as well as miniature versions of the car’s headlights and grille.

The Megatrike may sound like the prized possession of a post-apocalyptic warlord, but, like the Onyx supercar, it’s a fuel-efficient hybrid. The powertrain consists of a 400-cc gasoline engine and an electric motor. The Megatrike can travel 18 miles at 30 mph on electric power only.

The Megatrike might actually be more practical than the car it emulates. Supercars are notorious for having small trunks, but the Megatrike has a storage compartment in front of the rider, where a motorcycle’s gas tank would be. A rider can remove it to sit forward like on a conventional scooter, or straddle it like on a motorcycle.

If designing a scooter to complement a supercar seems like a difficult task, then designing a bicycle for the same purpose seems nearly impossible. Nonetheless, Peugeot tried to make the connection between these two disparate modes of transportation with a smattering of tech.

Peugeot’s designer’s also focused on aerodynamics. The handlebars were flattened to reduce frontal area, and the wheels were covered with fairings. The Onyx Concept bike also has an electronic shifter; exposed shift cables would have created too much drag.

Peugeot isn’t putting the Onyx supercar into production, so don’t expect either of these equally outrageous concepts to be in showrooms anytime soon. Instead, they’ll fulfill the same purpose as the Onyx at the Paris Motor Show: attract visitors to Peugeot’s stand and create interest in its products, whether they have two, three, or four wheels.

Volkswagen found something fun to do with its Atlas Cross Sport family hauler
Hyundai shocks us with its mid-engined RM19 sports car concept
How do you get people to take your electric supercar seriously? Set a lap record
The turbine-electric Mitsubishi Mi-Tech reminds us what’s great about concepts
Uber says it’s investigating ‘cybersecurity incident’
Nvidia’s Drive Concierge will fill your car with screens
The Uber hack is an outrageous tale of a teen hacking for fun
Tesla to fix window software on 1M of its U.S. cars
Lux and refreshingly livable, Mercedes’ EQE moves EVs mainstream
How to watch Tesla’s AI Day tonight and what to expect
2023 Audi Q4 E-Tron first drive: the predictable and traditional EV SUV we need
We need more 7-passenger EVs, but the 2023 Mercedes EQS SUV has room to improve
Tesla AI Day 2022: Optimus, self driving cars, and everything else announced