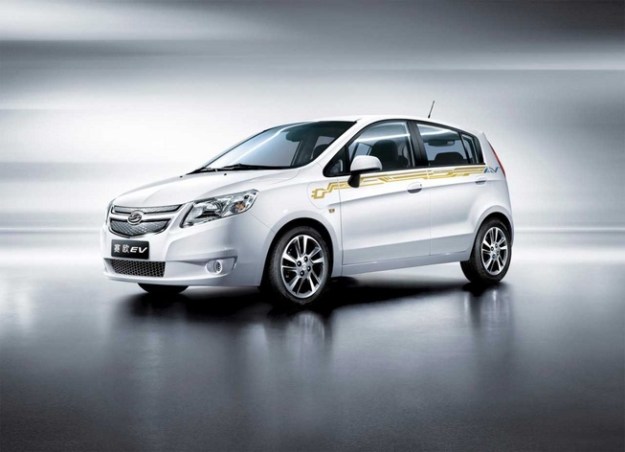 Last week, General Motors teased a new electric car, called Springo, that it plans to sell in China and other Asian countries. The car is part of a joint venture between GM and China’s SAIC Motor Corporation, and was just unveiled at the Guangzhou Motor Show.

Early reports stated that the Springo could be sold either as a Chevrolet or under its own brand name, and it appears GM and SAIC have decided to do the latter. This model will be called the Springo Sail, named after a 2010 Chevy concept car and the production Chevy Sail U-VA hatchback on which it’s based.

The Sail may be part of a new EV brand, but it shares most of its styling cues with production Chevys. The Volt-esque grille apparent in GM’s teaser images is mated with a body that has a lot in common with small hatchbacks like the Spark and Sonic.

Although teaser images suggested a car with the Volt’s aerodynamic shape, that look ends with the grille. It’s essentially an electrified version of the Sail U-VA, which is a subcompact hatchback in the same class as the Spark.

The interior is swathed in an interesting white and gray two-tone treatment, and includes a decent amount of tech. The center console is dominated by a touch screen for navigation and other functions. It also tells passengers how much electricity is left in the batteries. The Springo Sail will be offered with OnStar.

Initial reports said the Sail would have a paltry 87 horsepower, coming from a motor based on the one in the Spark EV. In fact, it will have a much more respectable 114 hp and 376 lb-ft of torque.

However, that extra power doesn’t equate to extra speed. The Sail sails to 62 mph (100 kph) in 10 seconds and its top speed is limited to 80 mph.

A liquid-cooled lithium ion battery pack provides the juice, and takes seven hours to fully recharge, according to GM. Range in everyday driving is 80 miles, but GM says that can be stretched to 124 miles, provided the driver doesn’t exceed 37 mph.

The Springo Sail will go on sale in China next year, supported by its own network of dealers called Drive to Green. If GM follows the same pattern, it could have a whole range of electrified Chevys rebadged as Springos in years to come.

The Sail will cost about $42,000 in China, meaning it probably won’t be ready for prime time in the United States unless GM can get the price down. The Sail doesn’t offer the size and sophistication of the Nissan Leaf, or the extended-range powertrain of GM’s own Chevy Volt.

Luckily, that’s not GM’s plan. The Sail will be exclusive to China, although other Asian markets are a possibility. At least American and European buyers won’t have to turn green with envy this time.