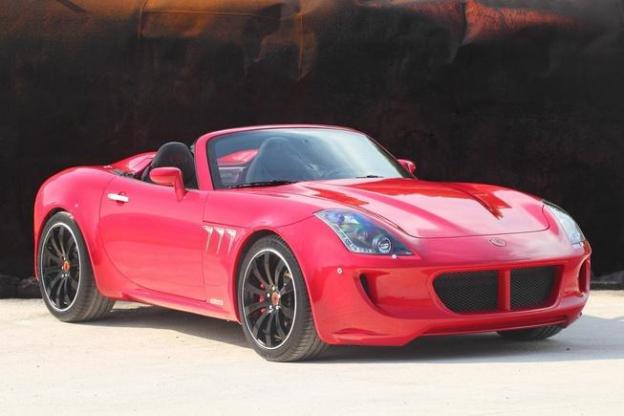 Making a new car is difficult, but there are shortcuts. Using someone else’s parts is a great way to build your dream car. Fifty years ago, Carroll Shelby combined an AC Ace chassis with a Ford V8 engine to create the Cobra. Now, a Spanish company called Tauro Auto Sport is doing the same thing, with an all-General Motors parts bin.

The Tauro V8 Spider starts life as a Pontiac Solstice. You may not remember the Solstice, because it was only made for a few years before Pontiac closed its doors. In that short period it spawned several badge-engineered clones, including the Saturn Sky, Opel GT, and Daewoo G2X.

The Solstice was a good-looking car from the start, but Tauro decided to change its styling to make it look less like a Pontiac. The result is still pretty nice, if a bit generic. It kind of looks like Tauro threw a body kit and some Nissan 350Z headlights on their Solstice and called it a day. However, the styling was not the biggest change.

When the Solstice first rolled into showrooms, it had a small four-cylinder engine under its clamshell hood. Tauro decided to replace that engine with the 6.2-liter V8 from a Corvette. The base V8 Spider will be tuned to 440 horsepower, but versions with up to 650 hp will be available.

In 2.0-liter turbocharged GXP trim, the stock Solstice produced only 260 hp. With “only” 260 hp, the Solstice GXP was able to sprint from 0 to 60 mph in 5.6 seconds. Tauro did not say how fast its V8 Spider will accelerate but, considering that it weighs about the same as a stock Solstice but has almost 200 more hp, it should be pretty quick.

All that power is sent to the rear wheels via a six-speed manual transmission, although buyers can get an automatic as an optional extra. Tauro also reinforced the car’s suspension and brakes for high performance driving.

When it goes on sale, the V8 Spider will start at 100,00 euros, or about $125,400. That seems pretty steep; fans of the Chevy small block could save themselves some trouble and buy a 638 hp Corvetter ZR1 for that price, and have a little change left over for tires.

That may be why Tauro only plans on building 30 V8 Spiders; each car will come with an individually numbered plaque. Exclusivity has a value of its own, but if Tauro’s Frankenstein machine can’t outperform the ZR1, it will be hard to see why the company is charging so much. After all, it’s not like Tauro built the V8 Spider from scratch.