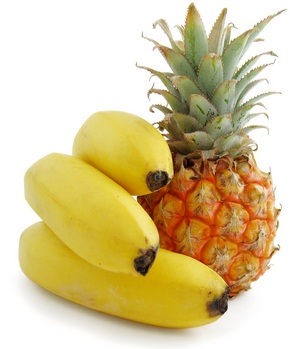 Scientists have developed a new fiber from fruits like pineapples and bananas that is almost as strong as Kevlar, the fiber used in bulletproof vests. The new fruity “nono-cellulose” fiber is so strong that researchers plan to use it to reinforce plastics like those used to make automobiles. The new fibers will help bring in an era of plastics that are stronger, lighter, and more environmentally friendly than those in use today, reports PhysOrg. Unfortunately, however, your new car probably won’t taste of citrus.

“The properties of these plastics are incredible,” said Alcides Leão, leader of the study, “They are light, but very strong — 30 per cent lighter and 3-to-4 times stronger. We believe that a lot of car parts, including dashboards, bumpers, side panels, will be made of nano-sized fruit fibers in the future. For one thing, they will help reduce the weight of cars and that will improve fuel economy.”

The fruity fiber plastics may have mechanical advantages over current automotive plastics as well. Nano-cellulose reinforced plastics may be more resistant to heat, gasoline, water, and oxygen damage. The product is ready to go too. Leão estimates that automotives with his new fiber would begin popping up as soon as two years from now. Beyond that, even metal parts may be replaced by fruit.

“So far, we’re focusing on replacing automotive plastics,” said Leão. “But in the future, we may be able to replace steel and aluminum automotive parts using these plant-based nanocellulose materials.”

Traditionally, cellulose fiber has been gathered from trees and used to make paper, among other things. More recently, scientists have found a way to extract tiny nano fibers from wood and other plants. These fibers are so small that 50,000 could fit across the width of a single human hair. Pineapple leaves and stems, in particular, are one of the most promising sources for nano-cellulose fibers. Bananas and coconut shells are also good sources of nano fibers. Leão speculates that these plastics could eventually replace artificial heart valves and other body parts as well.

The only downside: the second you put bananas in anything, they overpower everything else.

How crowdsourced lidar could give your car X-ray-like superpowers

How to defog the windows in your car

Who made my car? A comprehensive guide to today’s car conglomerates

The best GPS for your car