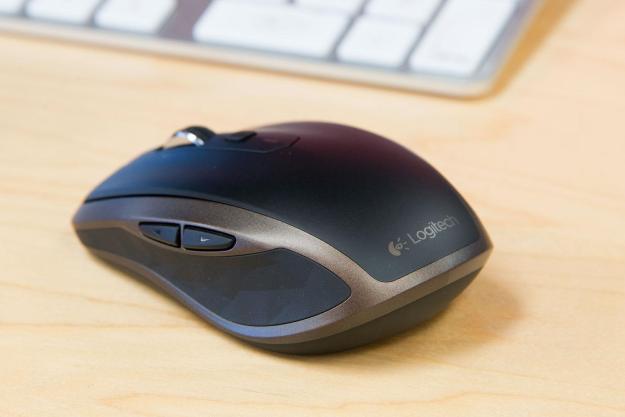 “Logitech’s MX Anywhere 2 is arguably the best mobile mouse, ever.”

Touchpads kinda suck. That harsh reality has plagued notebook owners ever since their invention. Even the best implementations, like those found on MacBooks or HP’s Spectre x360, leave something to be desired. A mouse is always more precise and more reliable.

That’s why travel mice exist. Logitech’s MX Anywhere is the genre’s hall-of-fame entry, holding top honors in the eyes of many reviewers and users since its introduction in 2009. Now, the mouse has received an update, its first in six years – but the improvements come with a higher $80 price tag. Let’s see if the MX Anywhere 2 can retain its crown and justify the expense.

The MX Anywhere 2 might be considered a pint-sized version of the MX Master, as the two were released simultaneously and share a common design language of matte black panels with bronze highlights. It creates a unique, understated elegance that’s unlike any other mouse on the market. It’s always difficult to make a computer peripheral look unique, but Logitech has managed it.

Aesthetics is where the sharing stops, however, as the MX Master and Anywhere 2 are otherwise entirely different. The latter is roughly half the size of the former, and adopts a flat, short profile that’s similar to some gaming mice. This makes it small enough to fit into any backpack pocket – or even a pair of jeans – without trouble.

This tiny mouse is easy to use on the side of your leg or a cramped airplane tray.

Reducing the size of the mouse changes how it’s used drastically, and arguably reduces comfort. A large mouse offers more contact area for a user’s hand, which means a more relaxed grip is sufficient. The tiny MX Anywhere 2, though, requires a bit of contortion to hold properly, and that goes double if you have large hands. I found it comfortable enough, but I could feel the pinch in my upper palm after a long workday.

The pain isn’t without gain, though. A more determined grip ensures precise control of the mouse even on a surface that’s small or uneven. Using this Logitech on the side of your leg, for example, is easier than with an MX Master because its design encourages a firm grip. I think compromising long-term comfort for a slim profile and easy use in tight quarters is the right call, but those who want one mouse for all situations may not agree.

Like previous high-end Logitech mice, this one uses the company’s proprietary Darkfield laser technology. The sensor’s sensitivity ranges from 400 to 1600 dots per inch, which is about right for a mouse that’s not designed to game, and it works on almost any surface.

Despite its price, this mouse doesn’t offer an exotic array of buttons. Aside from the obvious left and right clickers it provides just two thumb buttons and a middle clicker that’s located above the scroll wheeler.

Speaking of scrolling, the wheel can be used in two modes just like the MX Master. Click-to-click mode offers tactile “bumps” as the wheel spins, while Free-Spin mode lets the wheel glide freely. The scroll wheel can also tilt left or right for horizontal scrolling.

This selection may seem slim next to a gaming mouse in the same price range, but quantity isn’t the point. Logitech’s MX line focuses on intuitive excellence. In that regard the layout excels, beating even the bigger, more expensive MX Master. Anyone who’s used a mouse before will immediately understand how this device works.

Every button boasts excellent tactile feel, as well. The horizontal scroll buttons in particular deserve praise – often these are too squishy, or don’t respond immediately to input. No such problems exist here.

There’s no shortage of connection options for this mouse. It can be used over wired USB, wireless USB (via a dongle) or Bluetooth. The wireless USB option is compatible with Logitech’s Unifying receiver, so you can connect multiple Logitech peripherals to one adapter.

In addition to variety, the mouse offers selectable input for up to three different devices. In other words, you can pair it with three devices and switch between them using a button on the underside of a mouse. That’s great if you’d like to move between a desktop and a laptop, or want to use the mouse to occasionally control a home-theater PC.

The mouse uses a rechargeable lithium-ion battery that isn’t user replaceable. Logitech says it offers about two months of use. That seems about right in my experience, as I only had to charge the mouse once in several weeks of heavy use, and it arrived with the battery at only half its maximum capacity.

All the MX Anywhere 2’s features can only be unlocked if Logitech’s software is installed. Normally that’d be a downside, but not here. The company’s bundled utility is a cut above most competitors.

The benefits begin with the dead-simple installation. The software is kept in the mouse itself, and can be installed over Bluetooth or USB. There’s no need to plug in a USB drive or download an installer online.

Once available, the software tracks mouse status, provides access to advanced features, and gauges life of the rechargeable lithium-ion battery. The software has less to do with the MX Master, which has more features, but it’s still useful. Logitech purists will be happy to know the same software works for both current MX mice, so once you install the software from either, it’ll automatically detect and provide settings relevant to whichever is in use.

Logitech offers a one-year limited hardware warranty, which is standard for peripherals. A longer warranty would be nice given the price of this mouse, but competitors generally do no better.

This mid-range keyboard from Logitech is a good choice for users who want the convenience of a backlight on a budget.

The MX Anywhere 2 is a great travel mouse, but what if you have nothing to put it in? Timbuk2’s Command is an excellent, TSA-friendly travel companion.

If you want a great mouse, but can’t afford the MX Anywhere 2, this Logitech alternative is a good choice.

Both of Logitech’s new MX line mice are excellent, but it’s the little brother that comes out on top. The more expensive MX Master is wonderfully comfortable, and the better choice for pure desktop use, but it suffers from a few fiddly buttons and feature creep. The MX Anywhere 2 is a more focused peripheral, and while its nature introduces certain compromises, it perfectly accomplishes its mission.

It also easily defeats the competition. Microsoft’s Arc Touch puts up a fight, but it’s rather unconventional, and so lacks the intuitive excellence of Logitech’s entry. It also offers fewer buttons and fewer connection options, and is just $10 less.

The real question you’ll have to ask yourself is whether an $80 wireless mouse seems justified. Logitech, HP and Microsoft all offer less expensive, perfectly usable options, and many will choose them to save cash. If you want the absolute best mobile mouse available, though, the MX Anywhere 2 is it.

Topics
How much storage do you need on your new iPhone 14? Here’s how to decide
HP unveils new IPS Black monitor with one key new feature
This reliable leaker has some bad news about Apple’s M2 Pro chips
This half-sized micro-keyboard is a dream come true for PC gaming on the go
AMD quietly slashes the prices of some of its best CPUs
A keyboard with its own CPU and GPU? Yes, it’s real — and it’s coming soon
The dream isn’t over — AMD’s RX 7900 XTX may still hit 3GHz
Great, now even the RTX 4090 power connectors are starting to melt
Best Samsung Galaxy Note 20 deals for November 2022
Nvidia’s RTX 4080 may be up to 45% slower than the RTX 4090, but it’s still pricey
We’re lovin’ this official McDonald’s gaming chair — the McCrispy Ultimate
Scientists find a surprising answer to the future of computers — paper
The Framework laptop is officially Thunderbolt 4 certified