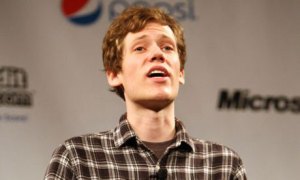 The notoriously seedy world of 4chan may be the first home of Christopher Poole, famously known as “moot,” who founded the anonymous posting site in 2003. But yesterday, Poole took to another popular Internet community, Reddit‘s “IAMA” (I am a…) section, to answer a wide range of questions, and promote his new meme-generating site, Canvas.

Unlike some more recent high-profile AMA interviews on Reddit, Poole’s Q&A received the official gold star from the subreddit’s moderators, as well as a confirmation from Reddit’s “hueypriest.”

As you might expect, the post quickly shot up the ranks on Reddit, and garnered more than 2300 “upvotes,” and nearly 4,000 comments, many of which were questions for Poole. In fact, the post received such an overwhelming response that Poole had to direct readers to his user page so they’d be able to see all his answers, which he says he provided over 12 hours.

Poole also provided a special link to his new project, Canvas, which allowed Redditors expedited access to the site, which is currently in an invite-only beta stage.

That special treatment didn’t stop Reddit from going straight for the jugular, however, with the top question grilling Poole about his support of anonymity online while requiring Canvas users to sign in using their Facebook accounts, which represent the antithesis of anonymous.

“I think it’s important to understand the difference between advocating for anonymous contribution, and a pro-anonymity-is-the-only-way!!!!! zealot,” writes Poole, adding, “(I’m the former.)”

At this year’s South by Southwest (SXSW) music and technology festival, Poole earned the title of the “anti-Zuckerberg” after a talk he gave that offered an opposing view to Facebook CEO Mark Zuckerberg’s avocation of using our real identities for all our online interactions.

“I want the public to understand the importance of having the option to contribute anonymously….The ability to fail quietly without having that failure associated with your name/identity allows for more experimentation and limit pushing,” says Poole. “People also contribute in a totally raw, unfiltered way, that I’d argue is more authentic than real-ID.”

Poole goes on to explain that in certain instances, like the comment sections on new websites and YouTube, “where the comment quality is often terrible,” real-ID is highly beneficial, and improves the online experience.

“So to sum it up: There isn’t one way of doing anything. I’m not saying everywhere online should be anonymous, nor do I think everywhere should use read-ID. I just want options!”

The topics covered in the questions range wildly, from how 4chan deals with people who post child pornography (anyone who does this “is an idiot” who gets automatically reported to the authorities), to what kind of women Poole likes to date (“Smart, nerdy, independent, passionate, pretty..?” ones who “like space, trains, and cities. And food.”)

The AMA seems to have worked as a promotion tool for drawing one of the quickest growing communities online to Canvas. All of the Reddit invites have been claimed, and the site is not currently accepting any more beta users.

The IAMA subreddit recently surpassed 200,000 subscribers, and has attracted millions of readers, and an increasing number of high-profile interviews. (For instance, Sen. Anthony Weiner (D-NY) just released his AMA video response today.) Reddit also released a list of the top scoring AMAs of all time, which is topped by the surprisingly hilarious 74-time “Jeopardy!” champion and author Ken Jennings, Stephen Colbert and Roger Ebert, among others.

After Obi-Wan Kenobi: The case for a Darth Vader Star Wars series