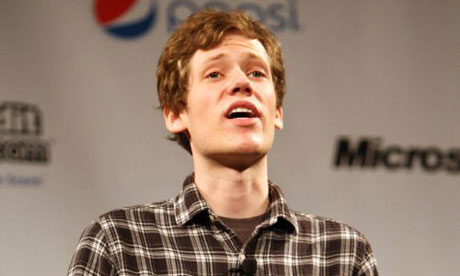 4chan founder Christopher Poole’s new Web community Canvas has been an underground entity until this weekend, when he officially launched it at SXSW. The site is similar to a cleaned up version of 4chan, and primarily features photo sharing colliding with Internet memes.

While detailing the new site at SXSW’s keynote, Poole also defended 4chan. “People want to think everyone on 4chan is a young rambunctious male. That’s not accurate – it’s a wide range of people using it. One of the things that 4chan does that’s really special is the way people come together to collaborate en masse. It’s the process at which you arrive at the product that’s fascinating.”

4chan has always retained a loyal user base, but rose to infamy this year as it spawned notorious hacktivist grouped Anonymous. The group has been able to (largely) retain secrecy among its members, something Poole finds valuable regardless of the popularity of openness and identity in the Internet age. According to The Guardian, the 4chan and Canvas founder noted that Facebook CEO Mark Zuckerberg is “totally wrong on anonymity being total cowardice. Anonymity is authenticity. It allows you to share in a completely unvarnished, raw way. The cost of failure is really high when you’re contributing as yourself.”

Even though he doesn’t see eye to eye with Zuckerberg, Poole will utilize Facebook Connect with Canvas. “Facebook Connect…is really just a first pass at weeding out your more casual trolls…who might muck the site. Simple registration filters out 20 percent of those people. Adding Facebook on top of that…hopefully prevents that.” Using Facebook Connect integration and requiring user profiles for Canvas was a somewhat controversial move for Poole, seeing as the site’s demographic highly values anonymity. Even still, Poole is determined to treat Canvas differently than 4chan and discourage some of the activity that plagues his former project.

Topics
Anonymous strikes? Teen cancels birthday and calls police after 214,000 guests RSVP on Facebook
Canvas meme machine from 4chan founder detailed
Anonymous seizes Westboro Baptist’s domain during live TV confrontation
Obama to meet with tech titans, including Steve Jobs, Eric Schmidt, Mark Zuckerberg
Apple’s VR headset may launch soon, intriguing leak suggests
The most innovative monitors of 2022
The most innovative tech products of 2022
Why I refuse to buy The Callisto Protocol on PC, even with an RTX 4090
Nvidia and AMD GPU prices could skyrocket again in 2023. Here’s why
How to safely overclock your Intel or AMD CPU
ChatGPT: how to use this viral, often hilarious AI chatbot
What does the lock mean on Snapchat?
I replaced my MacBook with a Quest Pro for a full work week. Here’s what happened