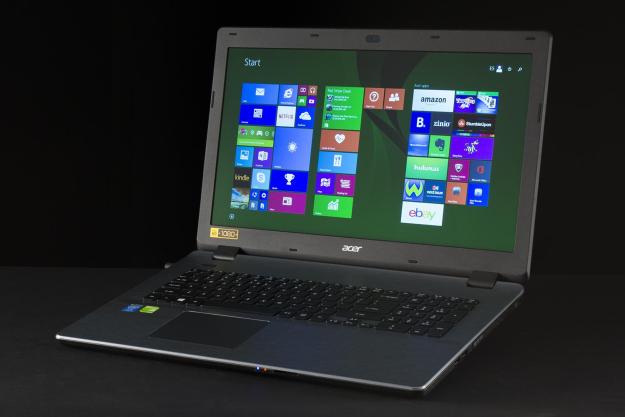 “The 17-inch Acer Aspire E5 isn’t great for travel, but it’s a good choice for anyone who wants a simple, powerful, stay-at-home notebook.”

An extinction event is underway in the computing world, and like the asteroid that hit Earth millions of years ago which wiped out the dinosaurs, the new victims are also pretty large creatures.

Today, it’s 17-inch desktop replacement notebooks that are going the way of the Pterodactyl. Aside from gaming laptops, which are a separate niche market, the number of distinct models sold with a screen that’s larger than 15.4 inches can almost be counted on two hands.

A large portion of the remaining options are sold by Acer, which sells a variety of desktop replacements for under $1,000. Among the most interesting of these is the Acer Aspire E5-771G-51T2, which offers an Intel Core i5-4210U processor, 8GB of RAM, an Nvidia GTX 840M discrete GPU, and a 1080p display for $799. That’s if you pay full MSRP, which you almost certainly won’t. As of this writing, consumers can pick up this exact configuration for less than $700.

Acer is no stranger to big laptops that offer massive value, and its desktop replacements have often enticed users with unmatched power-per-dollar. But cramming so much into a sub-$800 system isn’t easy, and quality often suffers in other areas. Can the 17-inch E5 offer good value at a bargain price?

Surprisingly, the Aspire E5 17-inch’s old-fashioned form factor doesn’t make it feel archaic. This notebook is big, but it’s only a tenth more than an inch thick, and weighs just six and a half pounds. These figures are low enough to endow the Aspire E5 with a modern feel.

Yet, this Acer doesn’t feel flimsy in spite of its (relatively) slim frame. An optical drive is included and, as usual, proves to be a weak point. Picking up the system by the right flank, which houses the drive, reveals a bit of chassis flex. However, every other surface feels solid, and the large display connects to the notebook’s lower half via a pair of well built hinges.

Plastic is the only material you’ll find on the E5’s coat, and its dull silver molding won’t cause users to skip a heartbeat. Matte coating is used everywhere (including the display bezel) to ward off fingerprints, and keep glare to a minimum.

Being large provides this notebook with plenty of connectivity. You’ll find four USB ports, two of which are 3.0, along with HDMI, and VGA. Ethernet and a combo headphone/microphone jack round out the options. Bluetooth and 802.11ac aren’t available, so you’ll have to get by with 802.11 b/g/n.

Space isn’t an issue with this massive notebook, and that goes for the keyboard too. Large keys, a roomy layout, and a full size numpad add up to a pleasing experience. Tactile key feel is great too, thanks to significant travel, and a firm bottoming action. Touch typists can immediately use this notebook without worrying about unexpected errors.

A back-light is not included, however. This surprised us, as the size and price provides room for its inclusion. Plus, we’ve seen keyboard back-lighting on other large laptops, as well as many 15.6-inch laptops in the same price range. Even the most expensive version of this notebook lacks a keyboard back-light option.

The E5’s large touch-pad is over four inches wide, and about three and a half inches deep, providing plenty of space for multi-touch gestures. These work well, and we didn’t have a problem with unexpected activation of the Charms bar.

We did have a problem with oversensitivity, however. This caused the accidental activation of icons and options, which occurred when our palms hit the touch-pad while typing, and also during normal use of the touch-pad. Owners of this notebook should plan to use an external mouse.

Our review unit arrived with a 1080p non-touch display. This is not uncommon among mid-range desktop replacements, so we weren’t surprised to see this on the Aspire.

What is a surprise is the panel’s quality. We measured a contrast ratio of 670:1, and a gamut spanning 90 percent of sRGB. These figures easily beat other inexpensive systems, including not only the Lenovo Flex 2, which has a maximum contrast of 470:1, but also the Lenovo IdeaPad Y50 and the Acer Aspire E5 14. We also noted strong black levels, good shadow detail, and a high maximum brightness of 310 lux. That, when combined with this laptop’s matte coat, makes the E5 17-inch usable in full sunlight.

Despite its strengths, the display comes up short when it comes to color accuracy. We measured an average delta error of nine, and several colors showed an error above 10. Anything above one is visible to the human eye, so these flaws are noticeable. In real-world viewing, the problems result in over-boosted color, and gives actors too warm of a tone. This makes them look flushed, or sunburned.

Color accuracy issues are most apparent when viewing content that’s meant to be realistic, such as a reality TV show. Media that’s heavy on special effects, such as Pacific Rim, or The Hobbit: The Desolation of Smaug, largely go unscathed, and can benefit from the panel’s decent shadow detail.

The E5’s pair of built-in speakers complement the display with high maximum volume, and low levels of distortion. External speakers would no doubt be an improvement, but aren’t necessary here. Acer’s decision to pair a solid display with a quality audio setup makes the E5 17-inch a great choice for watching movies and playing games.

The E5 17-inch can be configured with a variety of processors, but most mid-range models, including our review unit, ship with an Intel Core i5-4210U. This is a common processor that turned in predictably strong results.

As seen above, the E5’s score of 40.7 GOPS in SiSoft’s Processor Arithmetic benchmark pretty much lines up with the Dell Inspiron 15 7000 and Lenovo Flex 2 15-inch, which both had Core i5 processors. The IdeaPad Y50, which comes standard with a Core i7 quad-core CPU, is the king of this hill, though it’s $899 price of entry makes it the most expensive one of the bunch as well.

We also tested the Aspire E5 17-inch with Geekbench, which produced a multi-core score of 4,881, and HDTune, which recorded an average hard drive write speed of 87.8 megabytes per second alongside an average access time of 20.5 milliseconds. These benchmarks are new to our suite, so we have nothing to compare them with. However, based on past experience, the hard drive results are unimpressive. This is no surprise, as our review unit had a 1TB mechanical drive without a solid state cache.

Unlike many mid-range notebooks, this Acer pairs its dual-core processor with an Nvidia GeForce 840M discrete GPU. This component is a step below the GTX series that ships in gaming notebooks, but it still proved to be an upgrade over an Intel integrated GPU in 3DMark.

These results are better than the Lenovo Flex 2, but are far behind the Acer Aspire E5 14-inch, which scored an average of 61 FPS on Very High detail. The difference is due to the 17-inch model’s much higher 1080p resolution, which places more strain on the GPU.

The Aspire E5’s weight of six and a half pounds is light for its size, but that doesn’t necessarily mean that you’ll be taking this laptop along when you travel. Like all large desktop replacements, this system is too big to fit in most backpacks and messenger bags.

A great choice for watching movies and playing games.

Plus, you won’t be able to use this notebook for long, even if you find a place to pack it. The Peacekeeper Web browsing benchmark ate a full charge in four hours and thirty-three minutes. That’s over an hour less than the Lenovo Flex 2 15-inch, and two hours less than the 14-inch version of the Aspire E5.

The lackluster battery life is due to higher-than-average power draw. We measured up to 16 watts at idle, and up to 58 watts at load. That’s almost double the load consumption of the Flex 2 15, and 10 watts more than the Acer Aspire E5 14-inch. These results are not surprising, however, considering the E5 17-inch has a large, bright display, and a reasonably quick graphics card.

We were extremely pleased by this notebook’s cooling performance. We recorded only 35.1 decibels of fan noise at idle, and no more than 38dB at load. Yet, the system also idled at less than 80 degrees Fahrenheit, and never exceeded 90 degrees at load. The bottom never feels excessively warm, making this a true “laptop,” no matter how it’s used.

This is, in fact, the one area where this notebook’s size offers a notable advantage over slimmer competition. Compared to the smaller Acer Aspire E5 14-inch, which offers a slower discrete GPU, the 17-inch model runs ten degrees cooler on average, and is nine decibels quieter at full load.

That’s a huge difference. The E5 14-inch is too warm to use comfortably on your lap at full load, and can become annoyingly loud. Meanwhile, the 17-inch model hums along pleasantly under the same conditions.

Acer’s Aspire E5-771G-51T2 is a relic from an age of computing that’s coming to an end. Aside from gaming, a large laptop is no longer needed to obtain top-tier performance, and the more portable 15-inch and 14-inch form factors make more sense for average buyers. The Aspire E5 17-inch is bulky, difficult to travel with, and not much quicker than its peers.

Judged for what it is, however, this notebook deserves praise. Despite its $799 MSRP, this system currently sells at retail for between $680 and $730, and the 17-inch Acer Aspire E5 offers outstanding value for the price. The Aspire E5 17-inch scores well in performance, display quality, keyboard quality, and connectivity. Strange as it may seem to enthusiasts, there is a certain subset of consumers who buy laptops, but have no intention to use them anywhere but at home. That, in fact, is the entire point of a true “desktop replacement.”

For these users, the E5 17-inch just may be the perfect computer. Sure, it’s not luxurious, but the Aspire E5 17-inch can do anything a home user will ask of it without killing their wallet. Isn’t that what everyone wants from an affordable PC?