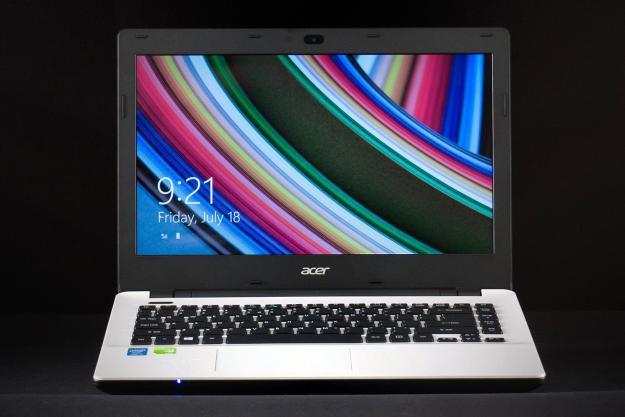 The back-to-school season is approaching, and that means swarms of students will soon be shopping for an affordable laptop. Yes, every college newcomer would love to be decked out with a MacBook Pro, but most will have to buy something more practical – like Acer’s Aspire E5.

Starting at $599 and boasting a 14” 1366×768 display, the Aspire E5 is no superstar, but it does offer a few unexpected features. The Core i5-4210U processor is a slight upgrade over the more typical 4200U, for example, and Nvidia discrete graphics comes standard along with a 500GB hard drive.

This equipment makes for a well-rounded package, but stuffing solid hardware into an inexpensive system often compromises battery life, display quality and other areas. Let’s take a look at the trade-off Acer has made – and judge whether they’re worthwhile.

On first sight we thought Acer might have accidentally sent us a duplicate of the Acer Aspire E1, a laptop we reviewed just a few months ago. The two offer many similar traits including an approachable white exterior, thick plastic chassis and black display trim. Unlike the E1, however, the E5 has a matte display bezel. This small change helps to reduce reflections and fingerprints, as the bezel is one of the most frequently handled areas of any laptop.

Quality is what you’d expect for a system in this price bracket. While plastic is the only material used, it feels durable and is slapped together with tight panel gaps. Some flex can be found, particularly in the keyboard area, but not enough to make the laptop seem flimsy.

Connectivity comes via three USB, only one of which is 3.0, along with HDMI, VGA, Ethernet and a combined headphone/microphone port. A optical drive is included, as well, which contributes to the system’s thickness but adds versatility. WiFi is restricted to 802.11 b/g/n and Bluetooth 4.0 is also part of the package.

Though thick, the Aspire E5 doesn’t use the extra vertical space to provide an excellent typing experience. Instead, a merely passable one is offered. A good amount of key travel is included, but keys bottom out vaguely, which can make mistakes hard to notice by touch alone. Users with large paws will appreciate the roomy layout, however, and there’s plenty of palm space.

Backlighting is not available on the Aspire E5, not even as an option. This makes low-light use difficult. We can’t knock the system too much for its absence, however, as few rivals in this price bracket offer the same.

Mouse navigation is available through a touchpad that’s four inches wide and two inches tall. In most respects using it is an entirely average experience. Sensitivity is modest, multi-touch gestures work well but aren’t perfect, and the integrated mouse buttons feel cheap. We wish the touchpad surface was textured, too, because we found it hard to distinguish from the surrounding plastic when our eyes were glued to the sceen.

The Aspire E5’s 1366×768 non-touch display unfortunately looks like a relic from the past. We measured a gamut that spans only 56% of sRGB, poor color accuracy and high black levels. In these critical areas the E5 posts some of the worst scores we’ve recently seen; only the Lenovo IdeaPad Y50 and the old Acer Aspire E1 perform as poorly.

Images and movies often look hazy, as if there’s a film over the screen.

Are there any bright spots? Not really, and that includes brightness – the maximum of 179 lux is adequate in most situations but can’t overcome the glossy display’s reflective properties in a bright room. We also noted poor viewing angles and a general lack of sharpness.

All of these numbers translate to flat, low-contrast image quality. Images and movies often look hazy, as if there’s a film over the screen, and the already inaccurate colors shift wildly when tilting the display just a few degrees.

Audio performance is better. Maximum volume is loud and while music has a tinny quality, it’s generally free of distortion. The speakers perform well with podcasts and video, where the clear mid-range can dominate most rooms. Still, external speakers or headphones should prove an upgrade.

The Acer Aspire E5’s Core i5-4210U processor features a base clock of 1.7 GHz and a maximum Turbo Boost of 2.7 Ghz. Though technically a “low-voltage” chip, that distinction has less meaning of late, as the majority of Intel’s mobile processors now target low power draw rather than maximum performance. Even so, the i5-4210U makes a strong showing.

As you can see, SiSoft Sandra turned in a score of 40.27, which actually defeats the Dell Inspiron 15 7000 and HP EliteBook 820, a pair of far more expensive laptops. This score also beats almost every ultrabook we’ve ever reviewed. While a quad-core system like Lenovo’s Y50 is quicker, rival dual cores can barely keep up.

While Acer supplies the E5 with a fast processor, the hard drive is a typical 500GB mechanical unit. There’s no solid state cache or other fancy tricks to improve its speed, and the result is a PCMark 8 storage score of just 1,977. The Inspiron 15 7000, which we tested with a hybrid drive, scored 2,991, and systems with a solid state drive often score just south of 5,000.

The slow drive was noticeable in normal use. Clicking the icon for a web browser, for example, results in several seconds of delay as the drive spins up. Though this sluggishness is tolerable, it makes the system feel slower than its impressive processor scores suggest.

Gamers will be happy to know that there’s a hint of capability inside this system. Instead of using Intel HD Graphics, like most competitors, Acer has opted for Nvidia’s GT 820. The chip produced a 3DMark Cloud Gate score of 4,498 and a Fire Strike score 854.

Benchmarks don’t tell the whole story, however, so we fired up League of Legends. We managed to hit an average of 96 frames per second at medium detail, with a maximum of 119 and minimum of 78. Increasing detail to very high decreased framerate to an enjoyable 61 FPS, with a maximum of 69 and minimum of 44. These results don’t represent a night-and-day difference between Intel HD and the GT 820, but Nvidia’s chip is certainly an improvement.

One of the most important changes Acer has made in the transition from the E1 to the E5 is easy to miss; the battery. The outgoing E1 had a tiny four-cell unit that even Acer rated at just four hours and, in our testing, came in six minutes short of that figure. Our Aspire E5 review unit, however, arrived with a six-cell battery rated at seven hours.

The Aspire E5 is as quick as it is affordable.

We tested that claim with the Peacekeeper web browsing benchmark and hit six hours and four minutes, an impressive result for a inexpensive laptop. A lighter load, such as simple document editing, would no doubt add another hour to the result. The E5’s thick chassis and 4.6 pound weight make it a bit difficult to lug around, but you’ll have no problem once you’ve reached your destination.

Our wattmeter caught the E5 consuming up to 10 watts at idle, which good for a mid-range laptop. Both the Dell Inspiron 15 7000 and the HP EliteBook 820 need 12 watts in the same situation. At maximum load, however, power draw can rise to as much as 49 watts. That’s GT 820’s compromise; when fully loaded, it draws far more power than a laptop with Intel HD Graphics. The HP 820, for example, needs no more than 28 watts at full load.

At idle the Aspire E5 makes barely a sound. The fan, while active, whirr slowly and softly, generating only 34.9 decibels. At full load, however, the racket can increase to a far more noticeable 47dB. That’s almost as much as the Inspiron 15 7000, which hit 48.3dB, and far more than the HP 820’s 42.1dB.

The active fan at least keeps the system cool. Idle temperatures hover around 89 degrees Fahrenheit, which is warm but tolerable, and the maximum external temperature hits 98.4 degrees at full load. These figures are very tolerable, and the load figure only appears during a long gaming session.

The Acer Aspire E5 comes with the company’s standard 1-year parts & labor protection. You could have to pay for shipping costs, however, so necessary repairs may not be entirely covered. Also, as usual, the warranty only covers “manufacturer defects,” which means all damage from accidents or misuse will come out of your pocket.

Acer’s Aspire E5 is in many ways similar to its predecessor, the Aspire E1, but it makes a few crucial changes. By far the most important is the switch to a larger battery, which tacks two hours of endurance to the new model. That’s a major leap forward, and you don’t even have to pay for it; the E5, like the E1, is $599.

There are also some flaws, of course. The display is disappointing, the hard drive is slow and the system is heavy for its size. But such problems are par for the course if you’re shopping for an affordable notebook, and Acer at least addresses gaming performance, a typical weakness of budget PCs, with a GT 820 graphics chip.

Minor though they may seem, the changes Acer has made transitioning from the E1 to the E5 boost the notebook’s value. Anyone looking for a well-rounded notebook on a tight budget should consider it, and that goes double if gaming performance is a concern.