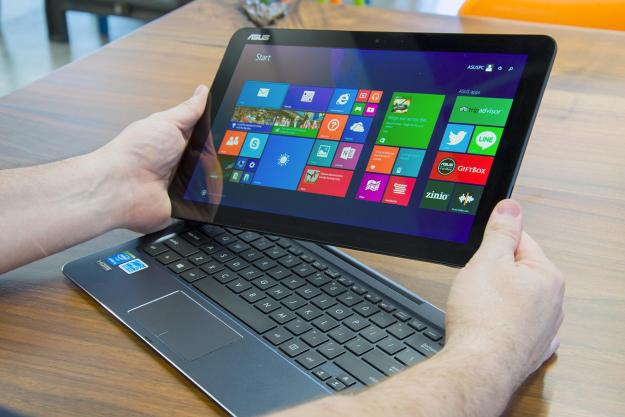 “The Asus T300 Chi hits the mark with a full size detachable keyboard and beautiful display.”

Recent convertibles have taken a number of different approaches, from the unique Acer Aspire R13’s flipping display to the foldable Lenovo Yoga 3 Pro, and each model has attempted its own take on size, power, and ergonomics. They’ve suffered shortcomings, though, from the R13’s poor display and the Yoga 3 Pro’s high price point.

Asus’s thinks it has a better compromise in the Transformer Book Chi series, which consists of three super-thin convertible laptops. We got our hands on the largest and most powerful model, the T300, to see how it fares in our hands-on assessment. It starts at just $699, and our review unit with upgraded display was $899. Does it strike a better compromise?

Best of both worlds

One problem many convertible laptops suffer from is striking a balance of size that serves tablet and laptop use equally well. The R13 or Yoga 3 Pro, with their large screens, nailed the PC experience, but were clunky when converted into tablets.

Unlike the Acer Aspire R13 or Lenovo Yoga series, the T300 can shed almost half its weight by detaching from its dock.

Unlike the aforementioned convertibles, which rely on a hinge, the T300 actually detaches (rather than swivels or folds) from its Bluetooth-operated keyboard to become a tablet. The magnetic dock takes a little getting used to, but keeps the display as firmly docked as any permanent pivot point. This makes the system lighter and smaller when used as a tablet, while retaining full laptop functionality.

We did have difficulty opening the Chi when docked with its keyboard, as the magnetic hinge gives some heavy resistance. This means no opening with one hand, which can be a bit frustrating, particularly during travel. The hinge also allows limited range of adjustment, as the display in laptop mode can only be tilted backwards a tad more than 90 degrees. Because most the hardware is in the display, any additional tilt would simply make the system flip on its back.

In terms of construction, the matte-black finish compliments the aluminum body nicely, and assembly feels solid throughout. The T300’s styling will look just fine next Apple’s brushed aluminum or the R13’s glossy veneer, though it lacks the flash of the gold MacBook.

The T300 definitely takes a tablet’s frugal approach to connectivity. One micro-HDMI, one micro-USB port, and a 3.5mm audio jack are all that’s offered for peripheral connection options. Fortunately, a micro-to-standard USB adapter is included.

The AC adapter is pleasantly compact, and only a bit larger than your average phone charger. Wireless options include Bluetooth 4.0 and 802.11 a/b/g/n Intel Dual Band access. Recording hardware consists of a two-megapixel camera and dual digital array microphone.

Asus maximizes the space available in the T300’s small frame by squeezing in a full-size keyboard and touchpad. Users with large hands are going to going to love the lack of hand-cramps and typos that typically accompany smaller devices. We noticed the keyboard is a bit noisy, though some may enjoy the vintage sound. There’s also no backlighting, which is unusual for a system in this price range.

Owing to the Bluetooth connection, the keyboard still works when detached from the main panel. An on/off switch above the function keys controls power, though it quickly goes to idle during periods of inactivity. The detachable keyboard really shines when the T300 is connected to external displays and projectors, as it becomes something of a super-remote. Professionals looking for a machine to pack for presentations will dig the T300.

The touchpad isn’t huge, but its three and a half inches of width were just enough to keep us from running out of real estate. Overall, it’s responsive and gives a satisfying click response for such thin construction. External controls feature volume and lock buttons on the left side of the display, and a power button on top.

A stylus pen is also offered as an optional extra for $39.99, though we found the screen plenty responsive for word processing and basic photo editing. Most people can do without.

The Chi comes with a 12.5-inch, IPS multi-touch display. Our review model had the 2560 x 1440 panel, but a 1080p option is standard on the $699 entry-level model. Viewing angle is listed at 178 degrees, though we noticed color shift occurring when viewing at wider angles.

Still, the T300 has a bright and beautiful display. Max calibrated brightness came to a shining 287 lux. Color response was 99 percent of sRGB gamut and 77 percent of Adobe RGB, which ranks it among the most vibrant displays we’ve reviewed.

In day-to-day use the strong figures add up to solid, if not outstanding, image quality. Excellent sharpness and respectable contrast give plenty of visual punch, particularly when fed HD content. However, we also noticed that reds were sometimes blown out; when watching clips from Conan, for example, it looked as if the talk show host had spent too much time in the sun.

Dedicated speakers located in the right and left side of the Chi’s display provide excellent stereo sound for a convertible. The speakers are plenty loud, though bass is predictably feeble. External speakers will be an improvement, but the bundled audio will do in a pinch.

Both versions of the T300 Chi come stocked with eight gigs of RAM, a 128GB solid-state drive and a 1.2GHz Intel Core M processor. Windows 8.1 felt snappy and browsing was plenty smooth. We only noticed a bit of slowdown when multiple programs were open at once.

Which is not to say the system is as quick as its competitors. As you can see, it’s substantially behind the Acer Aspire R13, with its more powerful Core i5 chip. This could be an issue if you frequently run demanding software.

The T300 also came up short in storage performance, hitting sequential read speeds of 432.4 megabytes per second and sequential writes of 214.5MB/s. These numbers are lower than most notebooks we’ve recently reviewed, which means programs and file transfers will take longer than elsewhere.

You might not expect 3D performance to save the system’s lackluster performance scores, and it doesn’t. 3DMark proved this is not a gaming rig.

As you can see, the T300 is a step below larger notebooks with Core i5 processors. On average, its performance even slower than ultrabooks from last year with Intel HD 4400 graphics.

We fired up Diablo 3 to see how real games run, and were predictably disappointed. Playing at the native resolution of 2,560 x 1,440 was hopeless, so we dialed things back to 1080p. Even so, the game averaged a mere 20 frames per second at low detail, and 11 at high. Rolling resolution back to 1,366 x 768 will be necessary to enjoy most titles, and don’t expect to play more demanding games.

Unlike the R13 or Yoga 3 Pro, the T300 can shed almost half its weight by detaching from its dock. The 1.56-pound difference might seem small, but it’s immediately noticeable when reclining in a chair or in bed. Without question, the T300 offers the best tablet experience of any convertible laptop we’ve recently reviewed.

One thing the T300 does suffer from is a mediocre battery. Using the Peacekeeper benchmark test and calibrating the display to 100 lux, we could only eek out an average battery life of three hours and thirty-minutes. The Yoga 3 Pro suffered from similar battery woes, though these two are at the bottom of the pile for battery life.

Real-world experience did tend to be a bit a gentler on battery life, as we could usually get five hours of use before requiring a charge. Still, the system’s limited battery life is undoubtedly the harshest mark against it.

Cool as a cucumber

When the keys aren’t clacking and the speakers are turned down, the T300 is completely silent. And with the fanless internals relegated to the display, the T300 generates zero heat on the lap. The back of the panel can get warm during processor-intense operations, but for the most part remains cool to the touch.

The T300 pulls a fair amount of power, consuming 14.1 watts when idling at 100% brightness. This no doubt contributes to its short battery life. Much of this draw comes from the pixel-dense display, which is brilliant but power-hungry.

This simple, affordable backpack from Case Logic is an excellent way to tote the lightweight T300 Chi around town.

Simple and inexpensive, this laptop sleeve from Amazon is a great way to carry this notebook when a full backpack isn’t needed.

This affordable Bluetooth mouse from Microsoft is a great choice for staying productive on the road.

The T300 Chi is a bit light on ports, and this inexpensive 3-port hub can help you expand what’s available.

The Asus Transformer Book T300 Chi represents the latest evolution in the company’s long-running line of detachable notebooks, which started with Android systems several years ago. Practice has helped refine the formula into a thin, yet functional, device that strikes a good balance between laptop and tablet usability. The base price of $699 is competitive, and the as-tested price of $899 isn’t bad.

All would be well if not for the battery, which is simply too small to provide strong endurance. The problem likely is the display as much as the processor, as 1440p resolution in this form factor is draining. And while we calibrated out test to a standard 100 lux, as usual, in the real world users may be encouraged to use even higher, more demanding brightness levels because of the display’s glossy coat.

If the T300 lasted longer on a charge it could rank among the best convertible notebooks currently available. As it stands, though, it’s an excellent system with one big, huge flaw that runs contrary to its greatest strengths. Users who plan to use the notebook at home may not mind the problem, but isn’t travel supposed to be a thin and light convertible’s greatest strength?