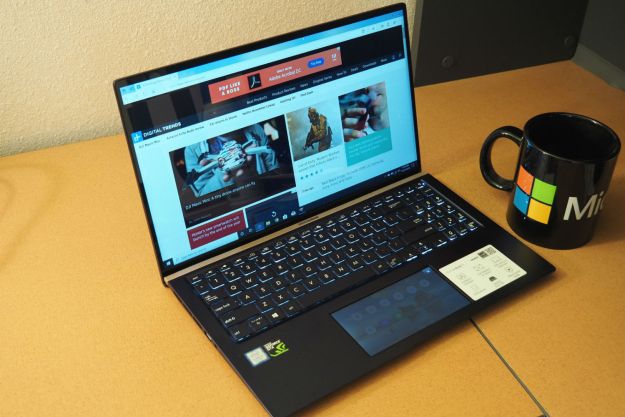 “The ZenBook 15 fits maximum laptop into minimum space, but that might not be for the best.”

Laptops keep getting smaller, and Asus has been at the forefront of that trend. Dell started things off with its XPS 13, which leveraged smaller bezels, but Asus has doubled down. Nearly every member of its premium ZenBook line is focused on packing as much computer into as small a frame as possible, and the ZenBook 15 UX534 ($1,399) that I reviewed is no exception.

To be sure, the ZenBook 15 is a petite laptop given its 15.6-inch display. Its 92% screen-to-body ratio means that the chassis is as small as possible, yet it still houses an 8th-gen Intel Whiskey Lake Core i7-8565U CPU and an Nvidia GeForce GTX 1650 GPU.

That’s a lot of power for such a small machine, but there’s more to the story.

Over time, ZenBook has become as consistent as Lenovo’s ThinkPad in its aesthetic. The ZenBook 15 has the iconic Asus concentric swirl on the lid, it’s blue with gold trim, so you’d be hard-pressed to tell the difference between this model and the ones that came before it.

Note that the ZenBook 15 competes with the Dell XPS  15, which also hasn’t changed up its design in a while, so it might not be fair to give Asus too much of a hard time.

I don’t begrudge Asus the ZenBook 15’s build quality. Its all-aluminum body is as solid as any competitor. Asus has paid a lot of attention to build quality, and it shows. It’s at least as good as the XPS 15 in this regard, and I haven’t reviewed a laptop that’s better.

Is the ZenBook 15 so much smaller than the XPS 15, or other similar laptops, that it’s size is a significant benefit? It depends on which dimension you’re looking at.

There’s no Thunderbolt 3 port, which is increasingly unforgivable in a premium laptop.

So yes, the ZenBook 15 is a bit smaller, and it’s quite a bit lighter. That’s a benefit. It also demands compromises.

That’s excellent, except for one thing. There’s no 3 port, which is unforgivable in a premium laptop. Wireless connectivity is also stuck in the past, with gigabit 2X2 MU-MIMO 802.11ac Wi-Fi (no Wi-Fi 6 or 802.11ax) and Bluetooth 5.0.

Fast, but not the fastest

The ZenBook 15 is smaller than the XPS 15 (and the Lenovo ThinkPad X1 Extreme, another powerful laptop), but can it keep up in terms of its performance?

As with the 13.3-inch and 14-inch models, the ZenBook 15’s hinge angles the keyboard up away from a desktop (or a lap). That allows for better airflow and a more comfortable experience. The fans spin up, but they’re not overly loud and they do their job.

That does make the most of the quad-core chip. Asus finishes our Handbrake video transcoding test in around three and a half minutes, significantly faster than other quad-core 15-watt , which typically need a minute longer.

The ZenBook 15 performed well for a thin and light laptop, but it’s not as quick as the XPS 15.

However, the Dell XPS 15 with the Core i9-9980HK finished the same test in a blistering 80 seconds. The ZenBook 15 clearly isn’t in the same class.

The same is true, albeit to a lesser extent, when it comes to the ZenBook 15’s GPU performance. It scored well in the 3DMark synthetic benchmarks, but nevertheless behind the XPS 15 by 20% on the Time Spy test. In our actual gaming benchmarks, the ZenBook 15 again performed well for a thin and light laptop but not as quick as the XPS 15. The ZenBook 15 managed 89 frames per second (FPS) in Civilization VI compared to the XPS 15’s 82 FPS at 1080p and medium settings, which surprised me.

Battery life is another compromise

Asus managed to pack 71 watt-hours of battery life into the ZenBook 15, which is a fair amount for a laptop of its physical size. Going just by the display size, though, other 15-inch manage to fit in more battery. The XPS 15, for example, packs in a whopping 97 watt-hour battery, while the HP Spectre x360 15 fits in 82 watt-hours. That limits the ZenBook 15 right out of the gate, no matter how efficient Asus managed to make the laptop.

In our battery tests, the ZenBook 15 is a mediocre to average performer. In the all-important web benchmark that runs through a series of busy web sites until the battery runs out, the ZenBook 15 lasted just under eight hours. That’s important because this test best mimics the battery life the typical productivity worker will get doing the usual browsing, email, and Office application work — it means that the ZenBook 15 will get the typical user close to a full day’s work if the workload is light. The Spectre x360 15 AMOLED — which suffers from a very power-hungry display — lasted for almost 8.5 hours, which is a real knock against the ZenBook 15 with its Full HD panel, and most premium last for at least eight hours.

The ZenBook 15 would have benefitted from a larger battery.

Looking at our Basemark web benchmark test that stresses the CPU demonstrates that the ZenBook 15 isn’t going to last terribly long if your workflow tasks the processor — the Asus lasted just over three hours, which is less than the four hours or so that the typical thin and light laptop manages. The XPS 15 OLED version lasted just 14 minutes less than the ZenBook 15, and the Spectre x360 15 AMOLED with the same CPU lasted for over 4.5 hours. Clearly, the ZenBook 15 isn’t terribly efficient under load. And in the video test, the ZenBook 15 lasted for just under 11 hours, which is average for premium today.

All in all, the ZenBook 15 would have benefitted from a larger battery. You can’t buy the 4K display version in the U.S., and that’s probably just fine because that model would get even worse battery life.

A 4K screen is absent

The Full HD display is the only option the ZenBook Pro comes with in the U.S. — and it’s below average. Colors are close to average at 72 percent of Adobe RGB and 93 percent of sRGB, and color accuracy is good but not great at 1.68 (less than 1.0 is excellent). Brightness is below our 300 nit preference at 289 nits, and contrast is below average at 700:1 (contemporary premium are creeping up to 1000:1 or better).

The bottom line is that the display is barely good enough for productivity work, although the low contrast might bother people who like their black text on white backgrounds to pop. Creative professionals should absolutely look elsewhere — including to the XPS 15 with its options for displays with spectacular — that is, wide and accurate — colors.

Asus has offered screens on its high-end in the past, but the ZenBook 15 is stuck with only a less-than-good 1080p screen.

The ZenBook 15’s keyboard is excellent, with legible yellow lettering on blue keys and lovely backlighting with three brightness levels. Its mechanism is light with a nice click, using a comfortable bottoming action to provide for a precise feel that touch typists will love. It’s not as good as my favorite keyboard, the one on HP’s Spectre line, but it’s close enough that most people won’t notice the difference.

That leads us to the touchpad, which is the latest version of Asus’s ScreenPad technology. Essentially, the touchpad is a 5.65-inch touchscreen that can either act as a traditional touchpad or provides a number of app-based functions. As a touchpad, it has a good feel with Microsoft Precision touchpad support and thus precise Windows 10 multi-gesture support. As the ScreenPad 2.0, users can access special function keys for Microsoft Office apps, use their finger to write on the screen, turn on a virtual numeric keypad, and use the ScreenPad as a secondary display. For example, imagine dragging a YouTube video down to the ScreenPad and letting it play while you continue to work on the primary display.

The ScreenPad 2.0 works well enough once you watch the introductory videos and get a feel for how it functions. For example, I didn’t watch the video right away and I struggled trying to figure out how to drag a window from the ScreenPad back up. I won’t spend too much time on the ScreenPad 2.0, because frankly, it’s a bit of a gimmick. I can’t figure out how to get the system to default to normal touchpad mode, so I need to keep switching it over when the laptop wakes up. That’s annoying, and if there’s a way to change the default I haven’t figure it out.

The ZenBook 15 UX534 excels at its most obvious objective: Packing a lot of laptop into a smaller chassis than seems natural. And if that’s what you’re looking for, then this is the laptop for you.

Unfortunately, the ZenBook 15 isn’t so much smaller than its competition that this particular attribute makes it stand out. You can get a faster and longer-lasting laptop that’s just a little bit larger, leaving the ZenBook 15 in an unfortunate position. And the ScreenPad 2.0 just isn’t enough to sway most people.

Another clamshell that you should look at is Microsoft’s new 15-inch Surface Laptop 3, which you can pick up with an AMD Ryzen 5 CPU, 8GB of , and a 256GB SSD for $1,500. You’ll love the display, which is a very high-res 3:2 aspect ratio for great productivity. Finally, the HP Spectre x360 15 (non-AMOLED) is in the same pricing ballpark as the ZenBook 15 and it offers a display, better battery life, and superior 45-watt performance — albeit in a larger and heavier convertible 2-in-1 chassis.

The Surface Laptop 3 would be a good comparison here, since it also tops out at a quad-core processor and 15-inch screen.

The ZenBook 15 is built well enough that you’ll be upgrading before it wears out years down the road. It’s relatively well-equipped, although no 3 is disappointing. The 1-year standard warranty is augmented by a year of accidental damage protection, which is a nice bonus.

No. The ZenBook 15’s standout feature, its small chassis, doesn’t stand out enough against some stiff competition, and the ScreenPad 2.0 feels like a gimmick and not a must-have feature.

Topics
HP Dragonfly Pro vs. Apple MacBook Pro 14: a solid alternative?
The best Dell laptops for 2023
The best fanless laptops in 2023
Best Dell XPS deals for January: Save on XPS 13, XPS 15 and XPS 17
The Galaxy Book 3 Ultra is Samsung’s most powerful laptop ever
Nvidia may have another monster GPU in the works, and the price could be outrageous
AMD’s Ryzen 9 7950X3D pricing keeps the pressure on Intel
What is ChatGPT Plus? Everything we know about the premium tier
ChatGPT Plus to bring priority access during peak times — at a hefty price
Usually $3,879, this Lenovo laptop is down to $1,479 today
Get this Asus gaming laptop with an RTX 3060 while it’s $400 off
All of Samsung’s videos from today’s Galaxy Unpacked event
Best 2-in-1 laptop deals: Save on Dell, Lenovo, HP and more