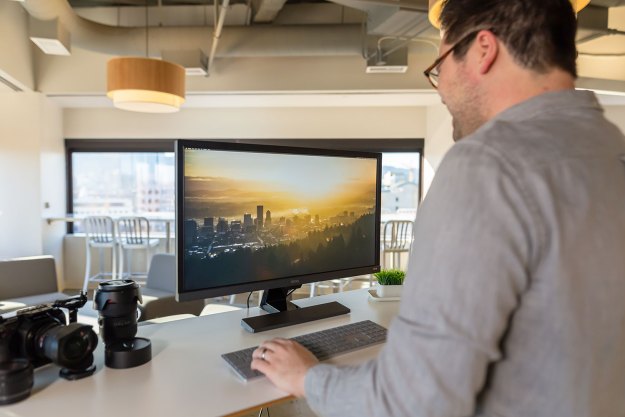 Most people still use a 1080p monitor, and there’s nothing wrong with that. But now that the prices of 4K monitors are closer to affordable, it’s easier than ever to buy some extra pixels.

We checked out the BenQ EL2870U to see if it makes for a solid, entry-level 4K monitor. Outside of just the high screen resolution, this 27-inch monitor also includes some great features like support for HDR and BenQ’s helpful reduced blue light settings.

Keep it in the office

If you’ve ever seen a BenQ monitor before, you won’t be too surprised when you pull this thing out of the box for the first time. The base and stand aren’t made of aluminum like the HP Z27, nor does it have ultra-thin bezels like the Dell UltraSharp 27 U2719DC. There’s nothing striking about its design. It’s perfect for an office, but not exactly fit for a creative studio. Even options like the cheaper Samsung UH750 have a more modern look. We like the brushed metal finish of the base, though everything else seems designed to be as bland and inoffensive as possible.

The portability of this BenQ monitor, however, was a surprise. With a net weight of 15.9 pounds, we found it pleasantly easy to be able to pick it up and reposition it on our desks when necessary. It’s in line with the weight of similarly-priced monitors, but it’s nevertheless a helpful feature, especially since it isn’t all that flexible.

The monitor stand has tilt adjustment (5 degrees down and 15 degrees up), but the lack of height or swivel adjustment is disappointing. You’ll need to find a good position for it on your desk and adjust your chair accordingly.

The bare minimum ports you need

The BenQ EL2870U doesn’t have many extra ports. Running along the bottom of the cabinet are the bare bone necessities: Two HDMI 2.0 ports and one DisplayPort. You won’t find USB ports, whether you’re looking for Type-A or Type-C. You can’t use the monitor as a hub for other devices or power your laptop. Most people don’t buy a monitor with that in mind, but they are the kind of conveniences a budget-level 4K monitor like this one can’t afford.

Unlike more expensive BenQ monitors, nothing in the stand is removable to hide or direct cords. They just dangle. Without height adjustment, reaching those down-firing ports is a pain. Once you plug things in you won’t want to move them around.

The EL2870U does include both speakers and a headphone jack, meaning you won’t be forced to use laptop speakers or to buy a set of external speakers.

The other notables you’ll find around the edges of the cabinet are five physical buttons for navigating through the on-screen menus and a power button button next to them. The physical buttons are simple and easy-to-use, giving access to control of brightness, contrast, sharpness, gamma, color temperature, hue, saturation, and a handful of picture modes. Among the picture modes is HDR, Cinema , Low Blue Light, and a few other of the usual suspects such as sRGB and Photo.

You’ll need to position it on your desk and adjust your chair accordingly.

Unfortunately, BenQ didn’t provide quick access to the most commonly-used settings like brightness and volume. Instead the left-most button lets you switch between a few different Low Blue Light settings. You’ll be digging through the settings every time you want to turn down the brightness, which is a bit annoying. Another slight annoyance is the power button, which looks and feels exactly like the others. We accidentally pressed it several times before we became familiarized with the setup.

Lastly, BenQ has included a forward-facing HDR button in the bottom-right corner of the monitor, proudly painted red. One click brings up the small menu, which then lets you toggle between , + B.I., or just B.I. — which is BenQ’s proprietary “Brightness Intelligence” solution. Once it’s flipped on, the feature automatically adjusts the monitor’s brightness to adapt to the ambient light in the room. The technology works well, especially if you’re in a brightly lit office.

We typically expect great image quality from BenQ monitors. Options like the BenQ EX3501R or PD3200U are some of our favorites, as both feature accurate colors, high contrast, and wide color gamuts. However, as the EL2870U proves, not every BenQ monitor hits the same impressive marks.

We noticed the lack of contrast and poor black levels right when we plugged it in. The wallpaper looked washed out, as did certain elements of the Windows 10 operating system. The problems became more obvious when we watched a movie. The darker scenes of Solo: A Star Wars Story looked grey and hard to decipher, especially when we compared to the same scene on our Razer Blade laptop’s display.

The results from our colorimeter only affirmed these suspicions. Right out of the box, black levels and contrast were shockingly low — some of the lowest scores we’ve seen on a display lately. We dug into the settings and found a few ways to improve this, but we do expect a monitor to look halfway decent right when you plug it in for the first time. Turning up the gamma improved both contrast and black a bit, as did switching over to “Photo” mode. But still, the results in these categories are closer to a budget gaming monitor like the Acer XF251Q than a 4K display meant for professionals.

When it comes to color, the BenQ fares a bit better. With 94 percent on sRGB and 74 on Adobe RGB, you can expect a wide-enough color gamut for images to look natural. It’s not the near-perfect results you’ll get from a monitor twice this price (or even on a high-end laptop), but it’s good enough for photographers and videographers to trust. Color accuracy, similarly, is decent with an average rate of error of 2.56, which can be brought down in calibration. We also found the 261 nits of max brightness to be satisfactory in well-lit office, though it’s a bit under the advertised 300 nits, and a bit too low to make proper use of HDR.

Yes, this monitor does come with HDR support, as well as a couple of HDR-specific picture modes. As HDR becomes a marketable buzzword in computer monitors, it’ll increasingly be added to budget-tier like this one. The feature adds a lot in compatible games like Battlefield 1, where colors really pop off the screen — though it’s not nearly what you’ll enjoy on a super-bright TV. Also, Windows 10 still poorly handles HDR, so you’ll want to toggle it on and off when you’re enjoying content.

Still, this is one of the least expensive 4K HDR monitors available, and some buyers only interested in those two specifications. BenQ has packed those big-ticket features in, but it had to trade some of the basics of image quality to achieve it at that price.

Calibrating the display didn’t drastically improve the problems we saw. However, it did lower the average rate of color error down to 1.36 and fix up the gamma. Both do make an impact on the overall enjoyment of using the BenQ EL2870U.

Regardless of what you use the monitor for, we highly recommend you calibrate it based on these results.

If you’re dying to upgrade to a 4K monitor, you might be tempted to pick up a cheaper model like the BenQ EL2870U. It’ll work well enough for a gamer looking to power gaming. or just as work monitor for creative professionals, but the poor contrast and black levels hold this back from being the ideal budget monitor.

There are plenty of great 4K monitors on the market, though our favorite ones are more expensive than the BenQ EL2870U.

However, there are some alternatives that have nearly identical specs that come in a bit cheaper. The Asus VP28UQG and the Dell 4K S2817Q are both over a hundred dollars more affordable. We don’t know quite how they test, but they all use TN panels and make very similar claims in terms of display quality. They don’t, however, include HDR support.

The BenQ has a three-year warranty, which is standard for monitors. Meanwhile, features like HDR and the high resolution mean it’ll be a relevant product for many, many years to come.

No. There are cheaper 4K monitors available, as well as ones with better image quality.