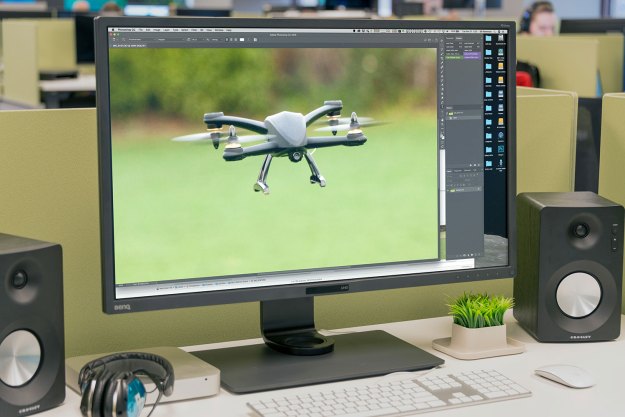 “You’ll be hard pressed to find a better value among professional-grade 4K monitors.”

The BenQ PD3200U is the quintessential pro-grade monitor. It’s sturdy, unassuming, and despite coming in at an enormous 32-inches with a crisp 4K display, almost humble.

How does a professional monitor stand out from the crowd? Simple. It performs, delivering a great picture with no fuss. Its job is to get out of your way, and fade into the background. But during our BenQ PD3200U review, we found it can do even more than that.

It’s striking how normal the BenQ PD3200U looks when you first get it out of the box. It’s big — at 32-inches it’s almost the size of a small TV — but plain and unassuming. It doesn’t have razor-thin bezels, or a dramatic silvery aluminum stand. It’s black and dark gray. Even display panel is matte.

The BenQ PD3200U is simple, straightforward, and utilitarian. There are no design elements which don’t serve a purpose, and that makes sense. This is a professional, designer monitor. It’s meant to spend its lifetime on a desk or drafting table, and it certainly looks the part.

The base is rock-solid and appropriately heavy, and the display doesn’t wobble, even when you really give your desk a jolt. On top of that stability it’s adjustable vertically, up and down, horizontally, and side-to-side. It even tilts forward and back quite a bit, so no matter your desk setup, you’re going to be able to adjust it to your liking. A VESA compatible mount is included, so if the stand BenQ has included isn’t to your liking, you’ll be able to find one that works for you — or mount this thing on your wall and just use it as a TV. It’s certainly big enough.

A design this understated might not be to everyone’s taste. Compared to the slick and stylish LG 27UD88-W 4K monitor, the BenQ PD3200U isn’t as striking or dramatic. It’s not going to turn any heads like the LG, with its ultra-thin frame, matte silver stand, and glossy white shell.

Lots of ports, in all the right places

We appreciate the BenQ PD3200U’s port layout. On the right-hand side, the single HDMI 2.0 port sits above the two DisplayPort 1.2 ports, these are easily accessible by just pivoting the monitor on its super-adjustable stand.

The design is functional and understated, but might not be to everyone’s taste.

Just beneath the HDMI and DisplayPorts, there are two USB-A ports, an SD card slot, and a headphone jack.

Tilt the monitor backward, so its lower “chin” juts forward, and you’ll find another set of ports — two more USB-A ports, two USB-B ports, and a micro-USB slot. The micro USB is for the aptly named “hotkey puck” which comes with the monitor. More on that in a moment.

Overall, this is a standard array of ports for a professional monitor, but the layout is convenient and thoughtful.

The BenQ PD3200U’s on-screen controls spring to life once you touch any of the four little LED touchpads on the bottom right corner of the monitor. To be clear, these are touch activated, not hardware buttons. From the quick menu you can adjust brightness, picture mode, or open the full menu, which is filled to the brim with presets, adjustable color, contrast, and sharpness options, and more.

The menus are clear and easy to navigate, and the touch buttons are quick and responsive. Getting to the option you want to change, making your change, and backing out of the menu is a quick and easy exercise, with no need to fumble across buttons located on the back-side of the display.

Remember the “hotkey puck” we mentioned earlier? Once you plug it in, it makes changing settings even easier. There are four buttons around the outside of the puck, each corresponding to a picture preset. Those presets can be changed by pressing and holding one of the four preset buttons. That way you can switch between modes like Darkroom mode, sRGB mode, or CAD mode — which is optimized for use with Autodesk’s AutoCAD suite — at the touch of a button.

You can also use the puck to navigate the entire display menu, so if touch buttons aren’t really your thing, you can avoid them entirely. It’s not an entirely new idea, and there are a few competitors that offer similar solutions, but it’s always a nice inclusion for a professional monitor. Being able to swap between presets at the touch of a button can save you a lot of headaches when you’re working with multiple color profiles at once.

Right out of the box, it’s easy to be impressed by this monitor — for a couple reasons. First, it’s just huge.

Text is inky and sharp, and images have remarkable depth.

It’s hard to overstate how large a 32-inch monitor looks up-close. It completely fills your field of view, and saturates it in vibrant, lifelike colors. At 4K text is inky and sharp, images have a remarkable sense of depth, and 4K games seem to pop right out of the display. It’s not a surprise that 4K content looks great on a 4K display, but that’s certainly the case here.

Loading up our testing rig to play Destiny 2 at 4K was nothing short of spectacular. Similarly, 4K video looks incredible on this display. Even at 60Hz, its maximum refresh rate, everything appears silky-smooth and richly detailed.

As we mentioned, it’s not a bad score, but for a professional monitor it’s not as high as we’d expect. However, to the naked eye the BenQ’s display looks vibrant and detailed. Darks are appropriately dark, and highlights are sharp and bright, and our tests bear that out. Its contrast ratio of 670:1 at maximum brightness isn’t the highest we’ve seen, but it’s a bit higher than its competitors. The HP Dreamcolor, for instance, came in at 520:1, and the LG 27UD88-W came in at 620:1.

Moving on to color accuracy, the BenQ managed to steal victory from the jaws of defeat with a near-perfect score. With an average color error of 1.23, to the HP Dreamcolor’s 1.68, and the LG 27UD88-W’s 3.97, the BenQ wins by a significant margin.

That means the BenQ capable of reproducing color nearly perfectly. Any score below 1.0 is considered to be perfect, so with 1.23, the BenQ comes awfully close. Let’s see if we can shave it down with calibration.

Calibration doesn’t always radically change a monitor’s performance, but in some cases, it will give you a little extra mileage and help gloss over some of your monitor’s flaws. Think of calibration like honing your kitchen knives. It’s not going to make them better, but it will make them sharper. With the BenQ, that’s exactly what we see after calibration.

Contrast, brightness, and color gamut all remained unchanged, but there was an important improvement: Color accuracy got even better. We saw the BenQ PD3200U’s pre-calibration score of 1.23 go down to .93, pushing it just over the edge into pitch-perfect territory.

There was a key improvement: Color accuracy got even better

To be fair, that’s the kind of improvement we saw from the HP Dreamcolor z32x also, which improved on its initials core of 1.68 by hitting .84. It’s important to point out that even though the Dreamcolor’s overall color error is lower than the BenQ’s, once you get under 1.0, the variances are rather minor. The LG 27UD88-W also improved, going from 3.97 to 2.34, but that’s still a little outside what you’d want from a professional monitor.

If you picked up the BenQ PD3200U hoping to pare down that color error, and you don’t have access to a professional colorimeter like a Spyder5 or Spyder4, just check out our guide on how to calibrate your monitor.

The BenQ PD3200U comes with a standard three-year limited warranty covering manufacturer defects and shipping damages, and units which arrive dead — provided you report the DOA unit within 30 days. It’s a typical warranty period for the category. You also get three years out of the HP Dreamcolor z32x, though only one year from the LG 27UD88-W.

4K is more commonplace now than it was just a few years ago, but that doesn’t make it any less awe-inspiring. With the right display, 4K content just sings. It’s rich and lavish, with detail that isn’t present on even the sharpest 1080p or 1440p display.

Prices have come down, but it’s still an expensive segment of the market — especially in the professional monitor market. That’s where the BenQ PD3200U really shines. Standing up against monitors that are three to four hundred dollars more isn’t an easy task, but the PD3200U sure makes it look that way.

Yes, but not at this price. At $800, the BenQ PD3200U isn’t exactly a budget monitor, but with killer 4K performance and pitch-perfect color accuracy it offers quite a bit for that price tag. As a professional monitor, it undercuts the competition by a fair margin. The HP Dreamcolor z32x starts at $1,326, and the BenQ’s higher-end sibling, the BenQ PV3200PT, starts at $1,300.

While the Dreamcolor features a wider color gamut, both displays feature near-perfect color accuracy, rich, high-contrast displays, and simple, professional designs. The BenQ PD3200U is missing that “looking out a window” quality the Dreamcolor possesses, but it’s much more affordable.

If you don’t need professional-level color accuracy, or you want something a little more stylish, the LG 27UD88-W is a compelling alternative. It starts at $700, so you’ll save a little cash, but keep in mind you won’t be getting that pitch-perfect color accuracy you find on the BenQ PD3200U.

It’s hard to say exactly how long this monitor will last, but it’s built like a tank. The stand is rock-solid, and the plastic frame around the display will protect the edges of your screen from any knicks and scratches it might get during moving.

And have we mentioned it’s 4K?

Hardware, particularly gaming hardware, hasn’t quite caught up to the demands 4K places on modern desktop computers, but it’s gaining steam fast, which means 4K content is going to become more and more common and much more accessible.

That means the monitor will outlast your current desktop hardware, and will see you through at least a couple years of hard use.

Yes. If you’re a professional looking for a display designed for creative use, you can’t do much better than the BenQ PD3200U — not without spending an extra couple hundred dollars. At this price, the BenQ is a steal. If you need a new workhorse monitor and you’re ready to step up to 4K, give this screen a serious look.

Topics
Video-editing app LumaFusion to get a Galaxy Tab S8 launch
AMD 7000X3D V-Cache CPUs could challenge Intel at CES 2023
LG’s latest 4K monitor wants to be your smart home hub
The best gaming monitors under $1,000: curved, ultrawide, 4K, and more
The best 4K laptops for 2022
You won’t believe how cheap this 2-in-1 Chromebook is for Black Friday
Avoid this Black Friday gaming PC and buy this gaming laptop instead
3 gaming monitors to avoid on Black Friday (buy these instead)
Hurry — Dell XPS 13 Black Friday deal drops the laptop under $750
MSI’s massive curved monitor may be a gamer’s dream machine
If you want AMD Ryzen 7000, Black Friday is the time to buy
Don’t get tricked by bad MacBook deals for Black Friday. Buy these instead
This RTX 3060 gaming laptop is easily the best Black Friday deal in PC gaming