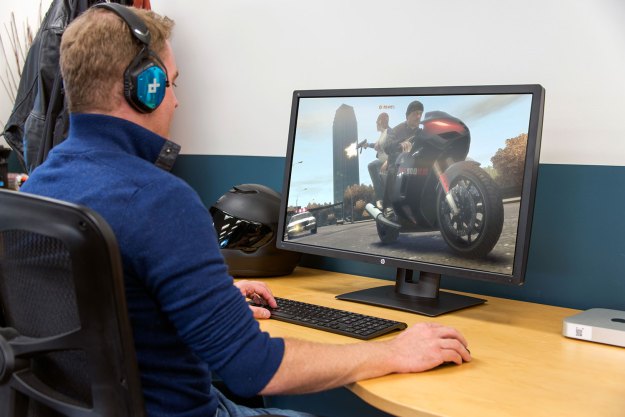 “The DreamColor Z32x is big and beautiful, but it doesn’t sweep the competition.”

Most people have bad monitors. It’s sad, but it’s true. In a world where anyone can go to Staples and buy a 1080p, 27-inch screen for $200, it can be hard to convince the average person to spend more. But some users are more demanding – and if you’re among them, HP’s DreamColor Z32x is probably on your radar.

This 32-inch, 4K monitor is the flagship of HP’s current fleet. It’s a “professional” display, which means that it’s built to meet the demands of people who need color accuracy. Its $1,500 price makes its target as obvious as its name. This monitor doesn’t mess around, and has set its sights on the image quality crown formerly held Samsung’s U32D970Q, which currently sells for $1,300 at most retailers. Can it dethrone our former big-screen champion?

The HP DreamColor Z32x certainly looks the business. Instead of slimming down, this display embraces its size with noticeable bezels and a broad, arching back that’s a couple of inches thick, at most. Plastic is the material of choice, as with most monitors, but the material used is serious, industrial-grade stuff that’s tightly screwed together. Nothing about the Z32x looks exciting – and nothing about it looks cheap.

A large stand with a broad base keeps the monitor firmly rooted to whatever desk it’s planted on. It does a great job of isolating bumps and nudges, so the display rarely wobbles. The stand adjusts for height, tilt, pivot, and can swivel to hold the display vertically, if need be. An obligatory cable hoop in the back ensures that connected inputs don’t snag during ergonomic adjustments.

There’s not much else to say about the look, and that’s fine. Professional monitors are supposed to do work, not attract attention. Just be warned the Z32x doesn’t have the style you may expect from a $1,500 display.

You shouldn’t have trouble connecting to this display. Its inputs include two HDMI, one DisplayPort, and one mini-DisplayPort. There’s also a USB 3.0 connection that powers two rear-mounted USB 3.0 jacks, which can be chained to other peripherals. We would’ve liked additional USB ports on either the left or right flank, for easy connection of thumb drives and other plug-and-play devices, but that’s not offered here.

All the monitor’s many adjustments are handled through a row of five simple, tactile buttons. They’re not as fancy as the joystick or touch-sensitive controls on other monitors, but like the rest of the display, they work. Adjustments are easy to make, and with practice it’s possible to change brightness or contrast without looking at the buttons.

This monitor certainly looks the business.

An extensive list of image quality adjustments is available including brightness, color space (sRGB, AdobeRGB, and BT.709), in-depth RGB customization, sharpness, image scaling, and picture-in-picture. These features not only allow for calibration of the display, but also help to handle low-resolution input, and multiple input devices. Adjustments are easy to navigate thanks to a simple menu that mostly relies on text, rather than obscure icons.

However, a few adjustments are missing by default, such as gamma and color temperature. To adjust these, users need to purchase the HP DreamColor Calibration Solution Kit, or use a compatible calibration solution like the X-Rite i1Display Pro, which usually sells for $200. That may turn off some users, and adds to the already extravagant price.

HP calibrates the DreamColor Z32x from the factory, and that showed in our tests. When set in the AdobeRGB mode the display produced 96 percent of the sRGB gamut, and 92 percent of AdobeRGB. It also hit a perfect gamma curve of 2.2 and produced an average color difference of .88. In that test, any difference below one is generally unnoticeable, so that figure represents excellent color reproduction.

These results are competitive with other professional monitors. The BenQ SW2700PT produced an average color of .84, which is better (as less is better in that test). However, its gamma curve of 2.3 is slightly off the ideal 2.2 target, which means images were a bit darker than true.

Samsung’s U32D970Q remains unseated, at least when in color. It also hit a perfect gamma of 2.2, but produced a border gamut at 96 percent of AdobeRGB. It also had a lower color accuracy value of .68. In truth, it’d be hard to tell the difference between the two without rigorous side-by-side analysis. But the numbers don’t lie. The Samsung U32D970Q is a bit better when it comes to color.

The HP strikes back in contrast. We recorded a ratio of 520:1 at 50 percent of maximum brightness, while the Samsung only managed 460:1. Contrast provides a display with the illusion of depth, and as a result the HP tends to look subjectively better than the Samsung, which has a flat, washed-out quality.

The on-screen controls aren’t fancy, but they just work.

To be clear, the Samsung’s contrast isn’t terrible. But it’s at a disadvantage. And it’s worth noting that BenQ’s smaller SW2700PT beat both by a mile, producing a contrast ratio of 730:1 at 50 percent brightness.

Putting the numbers aside, the HP DreamColor Z32x looks fantastic from the moment it’s turned on. Its accurate color reproduction gives it a window-like quality. High quality content looks less like film, and more like a portal to another place.

When the image quality did let us down, contrast was the culprit. At times, particularly in dark scenes, the image can look too bright, or seem lacking in shadow detail. Still, these moments are fairly rare, and the Z32x is one of the most attractive displays available.

Like many modern professional displays, the HP DreamColor Z32x performs so well out of the box that it’s not easy to improve. We did manage to increase both the sRGB and AdobeRGB gamut a percentage each, to 97 percent and 93 percent, respectively. And we also slightly decreased color error to a value of .84. But these are minor improvements, and they were just barely noticeable even when compared directly.

While the HP didn’t improve much after calibration, the BenQ SW2700PT did. Its post-calibration color error was also .84. It also matched HP’s AdobeRGB gamut and exceeds its contrast. The Samsung U32D970Q also remains superior in color gamut and accuracy, but inferior in contrast.

May not be great for gamers

This display is meant for work, but its 4K resolution and massive 32-inch panel may make it appealing to gamers. Buying it could seem like a sensible alternative to expensive gaming monitors that have a higher refresh rate, but smaller physical size and less impressive image quality, like the Asus ROG PG27AQ Swift.

Response times are not an issue with the Z32x. HP quotes a gray-to-gray response time of eight milliseconds, and we never felt a hint of input lag. What we did see is ghosting. Testing revealed that under certain conditions a fast-moving object will leave a noticeable trail behind. Gamers tend to be sensitive about such artifacts, and may find this an unacceptable flaw.

Three years of coverage come stand with the HP DreamColor Z32x. That’s typical for the category, but better than most inexpensive monitors, which generally offer just one year.

The HP DreamColor Z32x is an excellent, instantly impressive monitor. Its precise color, high display resolution, and accurate gamma result in a picture that looks true-to-life. Anyone looking to do color critical work will enjoy the Z32x, and it’s also a great pick for discerning prosumers who want a big, beautiful display.

Compared to the Samsung U32D970Q, though, the DreamColor Z32x has two problems. First, its color accuracy is not as precise. It’s very close, and the difference won’t bother most users, but is definitely a step behind. Second, and more importantly, the Samsung is more affordable at just $1,300. The extra $200 will be hard to justify.

Hard is not the same as impossible. The HP has a definite edge in contrast, which may be critical to prosumers. We also found the HP’s on-screen menu more intuitive, and its buttons easier to grab hold of at a glance. These factors will steer some to the HP – but it doesn’t quite unseat the Samsung as the champion of color.