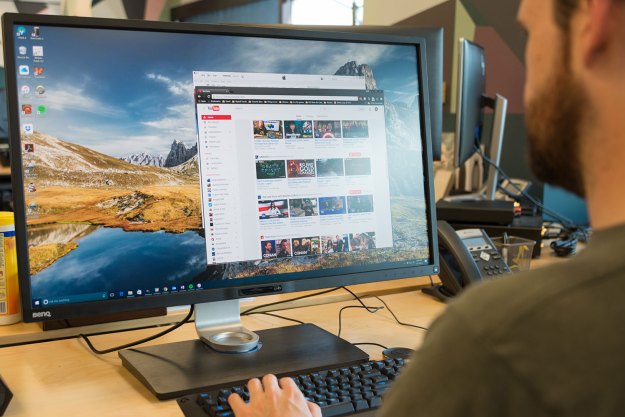 “BenQ’s PV3200PT is a solid choice for prosumers that demand the biggest 4K monitor possible.”

4K is the future. While 1080p monitors and televisions remain by far the most common found in the average home, they’re slowly being phased out and replaced by new, UltraHD sets. Eventually, the march of progress will make 1080p obsolete, just as 1,280 x 1,024 – once a popular PC monitor resolution – is now rarely seen.

If you’re interested in making content for 4K, or you simply want to experience the future today, you’re going to need a professional-grade screen. Like BenQ’s PV3200PT. Measuring 32 inches diagonally, and boasting full AdobeRGB cover, this display is one of the most capable we’ve seen recently. It competes with the Samsung U32D970Q, the HP Dreamcolor Z32x, and Dell’s UP3216Q, a list that might easily be named the “monitor hall of fame.”

Big, professional displays are capable. They’re also expensive. The BenQ PV3200PT retails for $1,300, and is usually only available through the BenQ Direct store – so don’t expect a jaw-dropping sale anytime soon. But while $1,300 is a lot of money for a monitor, it’s actually not bad for the category. It’s the same as the Samsung, and less than alternatives from Dell and HP.

So, does the BenQ PV3200PT has what it takes to beat the best monitors in the world?

Professional monitors are meant for work more than play, so they tend to be utilitarian. The BenQ PV3200PT doubles down on that approach. From the front it’s a generic black plastic frame, lacking any distinctive markings aside from a dull, matte-gray BenQ logo. Flip it around, and you’ll see a seemingly random assortment of plastic lumps. The casing is thick where it needs to be, and thin where it can be, without any design aesthetic to note. In other words – it’s ugly.

That doesn’t stop it from being functional. Its massive, heavy stand is adjustable for height, tilt, swivel, and can pivot 90 degrees for use in portrait orientation. The stand mount is VESA compatible, so a third-party stand can be used, though the one provided with the monitor is excellent.

Connectivity includes one HDMI 1.4, one DisplayPort 1.2, and one Mini-DisplayPort 1.2. It would’ve been nice to see support for newer connection standards, such as HDMI 2.0, but this arrangement is in line with the competition.

Two USB 3.0 ports, and an SDcard reader, are also included. They can be found on the right flank, a convenient location that makes them readily accessible. Competitors like the HP Dreamcolor 32x and Samsung U32D970Q put the USB ports on the rear, which makes them almost useless for quickly connecting a thumb drive or other peripheral.

Touch you can tolerate

We were surprised to see a battery of touch sensitive on-screen control buttons cover the lower right side of the PV3200PT. Buttons like this tend to be less responsive than physical buttons. Fortunately, BenQ tuned them well. They don’t activate accidently, yet don’t fail to respond when pressed gently. Touching any button illuminated LEDs that show the location of each touch-sensitive area, making menus easy to navigate even in a pitch-black room.

The casing is thick where it needs to be, and thin where it can be.

If you long for real buttons, though, don’t worry. The PV3200PT also comes with a unique hockey-puck remote that’s wired (but removable). It has a directional pad for navigating the menus along with four shortcut keys, which are programmable. We love the puck, not only because it offers a tactile way to control the screen, but also because it has reach. Changing your monitor settings won’t turn you into a humpback.

It’s a good thing the controls are on-point, because the menus are packed with options. The usual brightness, contrast, and sharpness controls are augmented by a plethora of selections for color mode, color gamut, color temperature, and more. Like any good professional monitor, the BenQ PV3200PT’s settings are precise, not vague. Gamma settings range from 1.8 to 2.6, color standards including Rec.709, EBU, and SMPTE-C can be targeted, and there’s even a few specific color temperature targets including 5000K, 6500K, and 9300K.

Aside from quality controls, there’s a typical assortment of value-added extras. These include picture-in-picture and side-by-side view modes, ergonomic modes that claim to protect the user’s eye-sight, and eco modes that reduce power draw.

The BenQ PV3200PT’s options are not more robust than average, but they do meet the standard expected for the class. The choice of two different ways to navigate them – buttons on the monitor, or the puck remote – provides flexibility not found elsewhere.

Let’s start with the obvious. This is a 32-inch, 4K display. Like any in that category, its high resolution and sheer size delivers a healthy dose of awesome directly to your retinas. Did you think your 27-inch monitor was sharp? Nope. This behemoth delivers 138 pixels per inch – almost 30 percent denser than 27-inch, 1440p display.

Prosumers, rather than professionals, should buy this display.

The sharp picture quality is augmented by generally solid image quality across the board. In testing, we found the display can render 95 percent of the sRGB gamut, and 72 percent of AdobeRGB. It also offers a maximum contrast ratio of 690:1, and an out-of-box color difference of just 1.14 (in this metric, lower is better).

These numbers highlight some differences between the BenQ PV3200PT and its competitors. Take gamut, for instance. Rendering 72 percent of the AdobeRGB gamut is respectable, but it’s not great for the category. HP’s Dreamcolor Z32x achieved 92 percent, while Samsung’s U32D970Q hit 96 percent.

This is a choice, rather than an oversight. The BenQ does not even have an AdobeRGB gamut target as an option, and it is advertised based on its sRGB and Rec.709 gamut coverage, not Adobe. Rec.709, though not a household name, is the color standard introduced in 1990 to govern future high-definition televisions, and it remains a common professional color standard for television and movie content.

Contrast is another area of difference, as the BenQ’s ratio of 690:1 is relatively high. The HP Dreamcolor 32x did no better than 550:1, and the Samsung came in much lower at 460:1. This is a noticeable difference, as contrast has a lot to do with a display’s sense of depth and dimensionality. Games and HD video carry more weight on the BenQ than they do on the Samsung, which looks flat by comparison.

We did note one major flaw – gamma. It came in at a reading of 2.4, while 2.2 is a target. This deviation means that content tends to look darker than it should on the BenQ, which can lead to loss of detail when viewing content that portrays a dimly lit scene, such as Smaug’s lair in The Hobbit, or certain portions of Blizzard’s action-RPG, Diablo 3.

While the BenQ PV3200PT looked good out of the box, it also had obvious room for improvement. We broke out our Spyder4Elite calibration utility and tweaked it using both Datacolor’s software tool and the monitor’s menu settings.

Our changes caused two major improvements. First, color error lowered from 1.14 to .98. Since this is a measure of error, a lower result is better, and anything under one is extremely good. This reading does not match the HP Dreamcolor 32x and the Samsung U32D970Q, which hit an average error of .86 and .68, respectively. But it’s better than the vast majority of displays.

Second, our new settings brought the gamma curve into the target of 2.2. This had a major impact on the overall tone of the display, which was overly dark before. While the default settings look acceptable, their lack of realism is evident when compared side-by-side with the BenQ’s calibrated picture.

It’s debatable whether the calibrated picture can compete with the HP and Samsung. Those monitors’ lower color accuracy and wider color gamut provide an advantage in certain situations, and makes them more capable when it comes to color. However, the BenQ’s higher contrast means it looks just as good, or better, in subjective viewing. It also handles color well enough to meet the requirements of professionals who work in the more limited sRGB and Rec.709 color gamuts.

Personally, we’d probably opt for the BenQ out of this trio of competitors for our own, personal use. This is due not only to the contrast, but also to the lack of wide-gamut color support. Displays that can handle a wide gamut can become a problem for the average user because they tend to mishandle content developed for a narrower gamut, resulting in strange color reproduction. But the BenQ is not wide gamut – so that’s not a problem.

But we’re not professional video editors, or photo editors, or graphic designers. As much as we like how the BenQ looks, its color results can’t be neglected. Its color gamut is narrower than similar competitors, and its color accuracy is not as precise. That could be a deal-breaker for precisely the customers BenQ is trying to court.

BenQ ships the PV3200PT with a 5-year warranty. That’s solid, but also standard for monitors in this price range.

BenQ’s big 4K monitor is an interesting beast. Although it targets prosumers and professionals, its technical approach differs from other high-end monitors we’ve seen. The priority here appears to be customization, functionality, and contrast ratio, instead of color accuracy and gamut.

The PV3200PT’s focus has a meaningful impact on image quality. It’s a great monitor for viewing photos, watching movies, and playing games (though it doesn’t support FreeSync of G-Sync, and has a standard 60Hz refresh rate). Content looks vibrant and is rendered with a real sense of depth.

For professionals, though, the monitor is in a questionable position. While the gamut the display provides is likely fine for its stated target audience – video editors – it may not be fine for other professionals, and overall color reproduction doesn’t stand out. The PV3200PT’s out-of-the-box results weren’t great, either, a consequence of inaccurate default gamma and a color gamut that didn’t even cover the entirety of sRGB in our tests.

When all the values are added, we don’t think the PV3200PT equals the best choice for professionals. Still, at $1,300, the monitor is not without value. Its technical capabilities are not the most impressive, but it’s a good choice for PC enthusiasts who want a huge, beautiful 4K display.

The best VR headsets
The best OLED laptops for 2022
The best ultrawide monitors for 2022
The best 4K laptops for 2022
AMD Ryzen 7000: Everything we know about Zen 4 CPUs
Apple’s October event may have been canceled before it began
Developer says it can turn your AMD 6800 XT into an Nvidia 3090 Ti
Best MacBook deals and sales for September 2022
Best gaming chair deals for October 2022
This new Windows 11 feature will help you protect your passwords
HP flash sale: Pavilion x360 2-in-1 laptop just got a $130 price cut
Save $550 on this HP gaming PC with an RTX 3070 today
Hurry — Dell XPS 13 is $550 off in Dell’s monster clearance sale