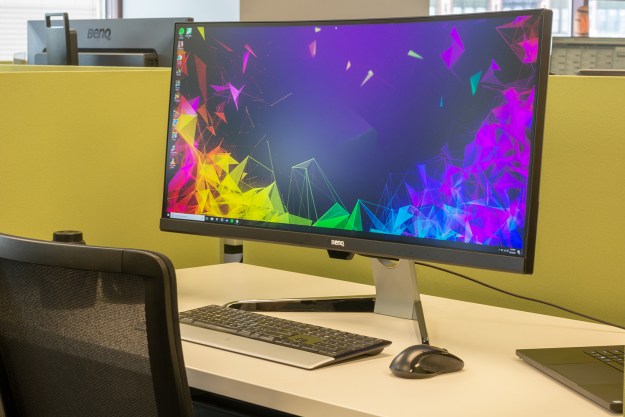 “The BenQ EX3501R is 35 inches of glorious, ultrawide goodness.”

Big monitors are great, but when size alone isn’t enough, curved ultrawide monitors are the next step. Unfortunately, they aren’t cheap.

The BenQ EX3501R won’t change your mind if spending close to a thousand bucks on a monitor makes you cringe – but while $900 might sound like a lot, the EX3501R has a huge suite of features to back it up including HDR support, EyeCare technology, a 100Hz refresh rate, FreeSync, and 35 inches of glorious ultrawide screen space. That’s impressive, even next to its competitors from LG, Dell, and HP.

Blending in — until you turn it on

BenQ monitors have a look or, perhaps, an intentional absence of a look. The company’s monitors are meant to blend into the surroundings of the office, rather than stand out with flashy design. The EX3501R doesn’t have ultra-thin bezels, and even the base and back have an inoffensive silver finish. It certainly doesn’t feature the chrome and flash of a gaming monitor from Asus or Acer.

On the other hand, the idea of a 35-inch curved, ultrawide monitor “blending in” is a bit of a paradox. Any monitor of this size is an eye-catcher, and it’s no different with the EX3501R. Plop this 3440×1440 monitor on your desk, and coworkers won’t be able to help themselves from stopping and gawking at its sheer size. This isn’t the biggest ultrawide monitor we’ve ever reviewed — that goes to the 38-inchers from LG, Dell, and HP. However, it’s certainly wide enough to open multiple windows fullscreen and fully enjoy the immersive experience using a curved, ultrawide. If you’ve never used a 21:9 , you’ll be surprised at how convenient things like multi-window productivity becomes.

The 1800R curve isn’t quite as bold as the 1500R Samsung CF791, but it’s still fantastic for watching movies and playing games. That’s right — the BenQ EX3501R serves as a very capable gaming monitor. Despite its mundane exterior, the EX3501R features a 100Hz refresh rate, which is lacking in the HP Z38c monitor. It’s not quite as smooth as 144Hz, which is the highest refresh rate commonly available, but games still feel snappy and responsive. And, thanks to the monitor’s included FreeSync support, you don’t have to deal with torn or unevenly-paced frames. Its four-millisecond response time isn’t groundbreaking either, but unless you’re a professional esports athlete, it’ll be more than responsive enough.

Any monitor this size is an eye-catcher, and it’s no different with the EX3501R.

Aside from HDR, it’s perfectly matched against the Samsung CF791, which is currently $150 cheaper than the BenQ. Meanwhile, the LG 34UC98-W costs $1,000 and the Dell UltraSharp U3415W is now discounted at $800 – but both have a more mundane 60Hz refresh rate. That’s fine, but they won’t look quite as smooth in games.

Attaching the screen to the stand and base is quick and easy — no tools are required at all. It’s not as sturdy as HP’s full-aluminum Z-series monitors, but we never felt nervous transporting it or adjusting the angle. Speaking of the stand, the BenQ EX3501R features 60 millimeters of vertical adjustment, which is decent — though monitors like the HP Z38c give you more flexibility with swivel adjustment as well.

All the ports you need

The BenQ EX3501R features a standard array of ports including USB-C, HDMI, DisplayPort, and two USB-A ports. Most important is the USB-C port, which allows for single-cord connection, so long as the computer you use supports it.

We wish BenQ had taken it one step further by including quick access to USB-C and USB-A on the side of the display, as unfortunately they’re placed by the others in a hard-to-reach location beneath the screen. It’s something HP and Dell include on many monitors, and we miss it here.

As for the menus, the EX3501R has six, down-firing physical buttons located along the bottom of the display. There are dedicated buttons for power and input, while the other four help you navigate through the menus. It’s not a great system, and it makes finding your way to certain settings difficult at first.

We became familiar with it eventually, but not before accidentally flipping the power off several times. Dedicated buttons control basic functions like brightness and contrast, but there’s no indication from the front of the monitor to distinguish them from each other. That means you’ll have to memorize which does what or rely on the guess-and-check method.

The BenQ EX3501R is a performer in display quality. Of all the monitors in of this kind that we’ve reviewed, the EX3501R has the best contrast ratio, holding 1100:1 at full brightness. The BenQ maxes out at 336 nits, which was plenty bright in our experience, and just barely brighter than its competitors, which hovered around 330 nits.

It’s not perfect on color gamut, but displaying 100 percent of sRGB and 82 percent of AdobeRGB, the BenQ EX3501R is a great fit for photographers and videographers who need a fine level of detail to the job done. It’s only bested by the 85 percent of the Samsung CF791, which just barely takes the cake in color gamut. When it comes to producing accurate colors, the EX3501R is, again, a champ. With a reading of 1.38, it’s the most accurate of all its competitors. Colors are beautiful and vibrant, never saturated or blown out. BenQ has once again lived up to its reputation for shipping extremely high-quality displays.

That is, until you try to use HDR.

While many of the flagship features included on the EX3501R are available on other monitors, BenQ wants this monitor’s calling card to be its HDR support. On one hand, it’s great to see HDR implemented on an expensive display like this. For the videos we checked out in HDR, the effect is a game-changer. Colors pop in a way that will make you never want to go back to SDR.  In addition to some videos, HDR works in a growing list of PC games, especially since the monitor includes support for HDR10, the most commonly used standard in games.

The display comes with an “HDR mode,” which really does make the colors pop, though it’s just an emulation — not true HDR. Things turned ugly when we went to turn on HDR mode in Windows 10 settings, however. Our beautiful, vibrant monitor transformed into a washed-out mess right before our eyes. Even with the settings changes in Microsoft’s most recent Windows 10 April 2018 Update, it’s still not fixed. Until Microsoft fixes it, we’d recommend leaving Windows 10’s default HDR settings off by default. You can turn HDR on in specific games or turn HDR on when watching HDR-compatible movies.

The EX3501R maxes it out at 363 nits, which isn’t bad for a computer monitor. But compared to HDR televisions, that’s pretty weak. Because the quality of HDR is affected by how bright a screen is, that’ll always limit the experience of HDR a bit and shows just how far back monitor technology is from televisions.

BenQ has once again lived up to its reputation for shipping extremely high-quality displays.

Despite how little you’ll use HDR on your PC today, it’s a futureproofing feature that’s likely worthwhile. If you buy an expensive monitor you want it to last you many, many years, and HDR support will ensure that it’s still up-to-date once years down the road. Who knows — maybe once the market is flooded with HDR monitors, Microsoft will figure out its HDR situation. For now, it’s an investment that’s sure to pay off later.

The good news is BenQ hasn’t added a significant surcharge to the HDR, meaning you’re free to ignore it until it’s a bit more useful. Otherwise, this is a high-quality monitor with fantastic color gamut, contrast, and color reproduction.

BenQ has shipped an accurate and vivid display right out of the box. The only real change we saw after calibration was in color accuracy — making it even better than before. After calibrating, we saw the average color error reduced to just 1.11, which solidifies its lead as most accurate display of any of its competitors.

The BenQ EX3501R isn’t flashy, but it has the goods where it counts in display quality. The EX3501R surpasses its rivals in almost every aspect of image quality. It’s a bit more expensive than some of its competitors, but with HDR support and decent gaming features, the BenQ is a do-it-all monitor that earns its price.

The most obvious competitor is the Samsung CF791, which matches the BenQ in every category, at a discounted price of just $750. It’s hard to beat that. Though if HDR is a must for you, the EX3501R is your best bet.

There are some decent offerings from LG, HP, and Dell, but the BenQ EX3501R is a better monitor in most aspects.

This monitor comes with a three-year parts and labor warranty, which is standard among monitors like this. Good port selection, build quality, and HDR support ensure this monitor will last you for many, many years.

Yes. It’s a fantastic monitor that’s futureproofed for a day when HDR will be a must.

The best Apple Studio Display alternatives
The best 5K monitors of 2022: Ultrawides
The best 4K gaming monitors of 2022: ultrawides, high refresh rates, and more
AOC’s new crazy expensive ultrawide gaming monitor has one thing others don’t
Get this Lenovo gaming laptop with an RTX 3050 Ti for $550 today
HP’s popular Spectre x360 2-in-1 laptop is $350 off right now
This massive 17-inch Chromebook is under $200 at Best Buy
Get this 15-inch laptop with a year of Microsoft 365 for $199
This Alienware gaming PC with an RTX 3080 Ti is $530 off right now
MacBook Air (M1) is $199 off, with delivery in time for the holidays
I used ChatGPT to interpret my astrological makeup, and it was surprisingly good
Apple mixed-reality headset: Everything we know about Apple’s VR headset
600Hz displays are coming. Here’s why they’re not as silly as you might think