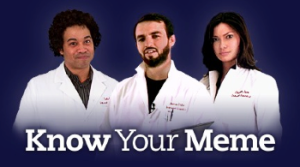 The goofy world of Internet memes has begun to devour itself. According to a report by Tubefilter, the Cheezburger Network has acquired Internet culture watcher site KnowYourMeme.com for a “low seven-figure sum.” The sale has been confirmed by Rocketboom’s Andrew Baron in a post on his blog. And the site has already been adorned with the Cheezburger Network tab bar.

The Know Your Meme site serves as a database for running Internet memes. Users are allowed to submit their own meme entries, or add images to go with memes that are already represented on the site. In addition to the meme database, which is said to include over 800 different memes, Know Your Meme also includes a forum, a blog and a store.

Know Your Meme started as a web video series by Rocketboom, which analyzed Internet memes in a scientific manner — and, in doing so, explains these often esoteric jokes for people like, say, your mom.

The first Know Your Meme episode aired in 2007, and covered the “One Take,” or a video that becomes popular because whatever is performed in it is shown in a single take, with no edits. Since then, Know Your Meme, hosted by Elspeth Rountree, Kenyatta Cheese and Jamie ‘Dubs‘ Wilkinson, has added its psuedo-scientific touch to dozens of Internet jokes and other online phenomena.

The Cheezburger Network, started by founder Ben Huh, has built its empire upon the monetization of specific Internet memes, showcased across various websites. The network got its start with ICanHazCheezburger.com, which is derived from the long-running LOLCats meme. (Like many of the oldest memes, LOLCats started as a joke on 4chan.org.)

Rather than start new websites based on emerging memes, Cheezburger Network prefers to purchase already existing websites, and add them to its network to build readership and get better ad deals. Other Cheezburger Network sites include everything from Fail Blog to Go Cry Emo Kid.

One of its most recent acquisitions is The Daily What, which started as a blog on Tumblr, and most often features items found on Reddit. The Daily What can be credited with launching the instantly infamous Internet career of Rebecca Black, whose video for her song “Friday” became an instant online classic for its sheer cringe-worthiness.

Cheezburger’s acquisition of Know Your Meme follows a $30 million round of funding from a variety of investors and venture capital firms.

Watch an example episode of Know Your Meme:

The Windows 10 April 2018 Update: Everything you need to know
Prove your security skills by hacking your own Wi-Fi network (or others)
Here’s why your email is insecure and likely to stay that way
The best mesh Wi-Fi systems for 2023
The best Mac webcams for 2023
The best external hard drives for 2023
The best touchscreen monitors in 2023
A key question for the Mac Pro has been answered — and it’s not good news
Apple Mac Mini M2 vs. M1: don’t make a buying mistake
How to delete a page in Word
HP Envy x360 13 vs. Dell XPS 13: the best tiny laptop?
Apple’s $600 M2 Mac mini obliterates the $6,000 Mac Pro
Here’s how ChatGPT could solve its major plagiarism problem