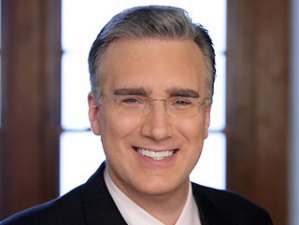 According to early reports, which seemed to appear simultaneously on a variety of websites late Monday, Olbermann has hired a PR team that says they plan to unveil the next chapter in the liberal television personality’s professional career.

“He and his new partners will make an exciting announcement regarding the next chapter in his remarkable career,” the PR firm said in an email, which they sent out to a number of different news outlets.

Olbermann, his team of spokespeople and Current TV representatives have all refused to comment further on the matter until later Tuesday, when they intend to fully reveal the news. But all signs point online for Olbermann, and to Current TV in particular.

None of the parties involved have denied that at least part of Olbermann’s next career move involves the former VP’s Internet channel. And an anonymous source tells The New York Times that Olbermann will have a stake in Gore’s public affairs channel.

Perhaps more telling, however, is what Olbermann did directly after his swift departure from MSNBC. According to an anonymous source speaking with the Wall Street Journal, Olbermann told colleagues that he planned to take his act online. In addition, the domain TheOlbermannShow.com (which remains empty) was registered two days before Olbermann bid “Countdown” viewers farewell. And Olbermann reportedly activated a new Twitter account, “FOKNewsChannel.” (“FOK” stands for “Friends of Keith,” a popular designation Olbermann uses on his popular personal Twitter account, @KeithOlbermann.)

The liberal firebrand, famous for his campy nightly segments and incendiary “Special Comments,” shocked the media world in January when he suddenly announced his departure from MSNBC on air. The exact reason for his leaving is as yet unknown to the public. However, many assume that recent rifts with MSNBC management lead the outspoken Olbermann to call it quits with the cable news channel.

As part of his $7 million settlement with MSNBC, Olbermann signed a non-compete agreement that keeps him off television for at least several months.

A move online would test the loyalty of the Friends of Keith (he received about 1 million viewers nightly on “Countdown”), requiring them to log on to an entirely different platform to watch his show. Whether or not he’ll ask that of them should be revealed later today.

UPDATE: Keith Olbermann has announced that he will host a one-hour nightly primetime news show on Current TV, starting this spring. In addition to his hosting role, Olbermann says he will also serve as Current’s “chief news officer.” So, there you have it, folks: Olbermann is going online.

Viacom yanks The Daily Show, other shows from Google TV