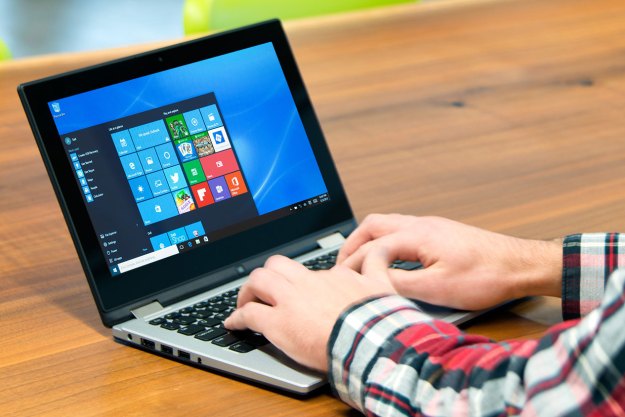 “As an affordable laptop that can double as a tablet in a bind, Dell’s Inspiron 11 delivers.”

The line between laptops and tablets is getting blurry, a trend Microsoft hopes will continue. Every OEM is refining what a 2-in-1 can look like, and it’s resulted in all kinds of designs and configurations.

Dell’s 2015 version of the Inspiron 11 3000 series, an 11.6-inch hybrid laptop, aims to be an affordable option — the line starts at $330. Our $600 “Special Edition” review unit represents the top tier of the system, and came with a sixth generation Intel i3 core processor, 4GB of DDR3L memory, and 128GB hard drive. An even more expensive $700 model is available with 8GB of RAM.

Billed as “two essential devices in one perfect package” by Dell, marketing photos show the 2-in-1 in an assortment of positions. Can the hinge really stand up to that kind of usage? And what kind of performance can an affordable check 2-in-1 offer?

Looks like a laptop, and that’s a good thing

The Inspiron 3000 doesn’t look like a two-in-one, and that’s a compliment. Many competitors have elaborate hinges or kickstands that look out of place on a laptop. This Inspiron is subtler. When it’s closed, or when it’s used as a laptop, it looks like any other laptop.

That’s possible because of a double hinge, which allows the screen to rotate all the way around the computer’s base in one fluid motion. Opening the Inspiron 3000 to use it as a laptop feels perfectly natural — just lift the display and start using your computer. If you want to switch over to the tablet form factor, keep pushing the display until it’s all the way around. Or, if you prefer, you can stop before you get all the way around and set it on your desk like a tent. The hinge can do these sorts of acrobatics, yet never feels loose.

There’s a reason not every company goes with this approach. It’s odd to grip a “tablet” and feel the (automatically disabled) touchpad and keyboard on the “back” of the device. But if you mostly want a laptop, and occasionally want a tablet, this design means your laptop use won’t be compromised by the tablet incarnation.

At three pounds the Inspiron 3000, while light for a laptop, is fairly heavy as tablets go. The iPad, for example, weighs less than a pound, and the Surface Pro 4 weighs less than two. So while you’ll barely notice this Inspiron on your lap as a laptop, holding it up in tablet mode to read will leave you with tired wrists unless you lean it against something.

Small laptops don’t have a lot of room for ports, but the Inspiron 3000 is relatively generous. There are two USB 3.0 ports for high-speed transfers and one USB 2.0 for everything else. An SD card slot means you can easily grab images from your camera, or you could leave a card in full time to supplement the relatively small 128GB hard drive.

Connectivity-wise there’s Bluetooth 4.0 for your wireless peripherals, and a Wi-Fi 802.11ac card for connecting to the web. The connection was fast and reliable for us, which is especially important because, like many modern laptops, this Inspiron lacks an Ethernet port for wired connections.

An HDMI port lets you hook up a second monitor or connect the laptop to a TV, and there’s a standard audio jack for external speakers.

From touch typing to tablet swiping

Typists will appreciate the Inspiron’s keyboard, which is spacious considering there’s not much laptop to work with. The keys themselves don’t exactly click, but aren’t muddy, either. Typing feels precise and responsive. The layout of the keys is familiar — there are no special keys or quirks. The only real downside is the lack of a backlight, but that’s hardly surprising. Backlights aren’t common for computers in this price range.

The design means your laptop use won’t be compromised by the tablet incarnation.

The touch pad is a little on the small side, and its texture feels a bit gritty. There are integrated left- and right-click buttons on bottom of the touchpad, which give a satisfying click when tapped. It doesn’t really stand out, as touchpads go, but it also won’t get in your way. Gestures can feel inconsistent, though. Flipping the display between tablet and laptop mode occasionally caused two finger scrolling to stop working until a reboot.

Flip the display over and the keyboard and touchpad are disabled, which is good. They’re on the back of the tablet, meaning you’ll hit them while holding it. The touchscreen is smooth, and responsive. Multi-touch gestures worked consistently.

Not a bad little display

The 11.6-inch display offers a resolution of 1,366 by 768 pixels, which isn’t full HD, and low for a laptop in 2015. But that doesn’t mean it’s a bad display – it works, because of the Inspiron’s small size. Photos look vivid, colors pop, and details are crisp. The resolution, while not impressive on paper, translates to a respectable 135 pixels per inch. That’s almost as dense as a 15.6-inch 1080p display, which packs in 141ppi.

Wide viewing angles are important for a device like this, which will be used both as a laptop and a tablet. Dell advertises a 174 degree viewing angle, and that seems consistent with our experience. Whether you’re using the display as a laptop on your desk, or taking it to the couch and leaning it against your knees, you’ll be able to see everything clearly.

The built-in speakers can blast music from across the room without much difficultly, and cranking the music up didn’t cause any distortion that we noticed. There’s enough power here to listen to a podcast from across the room and not miss any dialogue. Audio quality is tinny, however, so audiophiles will absolutely need to connect external speakers.

Performs well for the price

Dell offers the Inspiron 3000 2-in-1 Special Edition with a 6th Generation Intel Core i3-6100U. Less expensive versions instead equip Intel Celeron or Pentium chips. Buyers should note those are based on a different architecture than the Core i3, and will offer substantially worse performance. These benchmark results only apply to the Special Edition.

To get an idea of what the Core i3 can do we fired up the Geekbench benchmark. The results? A ,2248 single-core score and a 4,892 multi-core score. Here’s what that looks like compared to some other 2-in-1s on the market:

As you can see, the Microsoft Surface 4 Pro badly outperforms the Inspiron, which isn’t surprising given the price. The budget Toshiba Satellite Radius 14 is a closer comparison, which makes sense given that it also was reviewed with an i3 processor. We praised that affordable computer for its performance given its price point, and given the comparable price, that praise extends to the Inspiron.

What does all of this mean? While no powerhouse, this Inspiron is more than capable of performing well for day-to-day usage. Rendering video is going to take a while, but browsing the web and getting work done shouldn’t be a problem for most users.

Our review unit came equipped with a 128GB solid state drive. The Crystal Disk Mark test reported a read speed of 477 megabytes per second and a write speed of 135MB/s. While this isn’t the fastest result we’ve seen in a 2-in-1, the read speed does blow away the speed of the Toshiba Satellite Radius 14 and its conventional hard drive. In fact, very few laptops of any size ship with a 128GB SSD for $600 or less.

The relatively fast read speed means that the computer boots quickly, and applications feel snappy. The write speed is downright slow, however — not much faster than a mechanical hard drive. This means saving or transferring large files might require patience, particularly if you’re used to faster SSDs. This is disappointing, but understandable given the price point of the machine.

The Inspiron 11 2-in-1 is not a gaming machine, and our graphics tests told us this loud and clear. The Intel HD Graphics that powered the Inspiron gave us some of the lowest results we’ve seen in a while. Firestrike scored 268, and Skydiver scored 1,225. Even the Satellite Radius 14 is quite a bit faster.

You shouldn’t expect to do much gaming with results like this, and we had trouble getting Heroes of the Storm up and running. It took so long to load that the game ran out of load music to play. When we did get the game working, a framerate of 14 FPS made it hard to follow the action up until the game crashed. We weren’t able to run any benchmarks. Don’t expect to run the latest 3D games on this laptop.

Light for a laptop, heavy for a tablet

The Inspiron 3000 is 12 inches wide, eight inches deep, and just .75 inches thick. It can comfortably fit in a messenger bag or backpack without any problem — if anything you might lose it in there. It weights just over three pounds, so you’ll barely notice you’re carrying anything.

Dell advertises the Inspiron as having “up to 8 hours of battery life,” but how does it stand up to actual usage? Our tests — which include the Peacekeeper battery test, web browsing, and looping video — showed an average battery life of 6 hours and 28 minutes. Here’s how the Peacekeeper result compares to other systems.

All in all, not bad. This Inspiron probably won’t last a full work day on a single charge, but you’re not tethered to your charger either.

Not too loud, not too hot

You might miss it, but this laptop does have a vent on the back for heat exhaust. We didn’t hear the fan running during day-to-day usage, so we ran a bunch of benchmarks to see if we couldn’t hear it. If it did turn on, we couldn’t tell. We couldn’t hear anything, and a decibel meter couldn’t pick up anything beyond the ambient sound of the room we were in. For day to day usage, this computer will be nearly silent.

Running the same tests, we took out an infrared thermometer and checked out the bottom of the case. When the computer was idle for five minutes, the laptop was the same temperature as the room — 72 degrees Fahrenheit. After running the 7Zip benchmark for 5 minutes, one spot on the case heated up to 97F. The Furmark benchmark warmed the same spot slightly more, at 98F. That means the Inspiron 11 3000 series will occasionally be warm to the touch, but never hot.

Dell offers a standard one-year warranty, which is the norm for laptops.

A laptop that can sometimes be a tablet

Dell UltraSharp U2715H 27-Inch Screen LED-Lit Monitor ($495)
If the small screen is leaving your feeling cramped, plug in a bigger display for when you’re at your desk.

In the world of the 2-in-1, there are laptops too bulky to be tablets, and tablets too underpowered to be . The Inspiron 3000 series 2-in-1 is firmly in the first category. It’s a little too bulky and heavy to replace an iPad. Then again, this laptop is priced similarly to an iPad, and actually several hundred less than a new, 128GB iPad Air 2.

If you want an affordable, sturdy laptop with a decent processor and a real keyboard — that can also occasionally serve as a somewhat tablet — the Inspiron 3000 might be perfect for you. It offers strong performance at a reasonable price.