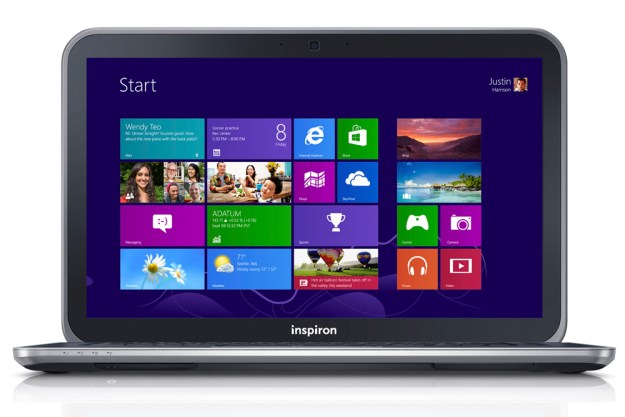 “Going big hasn’t caused the 15z to compromise its Ultrabook roots. This is a snappy, portable system. While it isn’t a performance powerhouse, it does meet the demands of the average consumer.”

Ultrabooks were made to be small, but now they’re starting to go big. It’s an ironic but inevitable turn of events caused by the fact that consumers buy more laptops with large screens than small ones.

This results in systems like the Inspiron 15z. Though equipped with a 15.6-inch display, it’s less than an inch thick and weighs a modest (for its size) 4.75 pounds. The 15z is a mash-up of the tech industry’s fetish for thin devices with the reality of consumer buying habits.

The wonderful ASUS Zenbook UX51VZ has already proven that large yet thin laptops can be great. That being said, it also has a price tag just shy of $2,000. Dell’s 15z starts at $749 with a Core i5 processor, 6GB of RAM, and a solid-state cache drive. Our review unit added on a touchscreen, increasing the price to $899.

The $900 price tag is far more affordable than the Zenbook, but it also leaves the 15z with hardware specifications that aren’t much different from any Ultrabook we’ve seen before. If you’re shopping in this category, you probably know the drill: Core i5, solid-state drive, and integrated graphics. Does this laptop manage to stand out from the crowd? Let’s take a closer look.

Products made for mass consumption are usually sleek and inoffensive, and this is true of the Inspiron 15z. Our unit arrived with a gunmetal brushed-aluminum finish trimmed in silver plastic. It looks fine, but it also doesn’t stand out. Even the laptop’s profile isn’t strikingly thin, though anyone with an older 15.6-inch laptop will notice the difference.

Material quality is a high point. This is an affordable laptop yet its look and feel exceeds the expectations set by price. Metal is used extensively on both the display lid and the interior, and every surface feels solid. Even the material around the optical drive yields only minor flex.

We did notice some large chassis gaps, however. These were most obvious along the seam between the metal palmrest and the plastic that surrounds it. Though not a serious flaw, large gaps detract from the 15z’s otherwise excellent design.

Connectivity is a strong point. There are four USB 3.0 ports (two on each side), along with HDMI, a combo headphone/microphone jack, and a card reader. Most competitors are down at least one USB port and don’t bother to include an optical drive.

Dell’s lack of numpad will ward off accountants, but the extra room benefits everyone else. There’s a plethora of space for typing. No key feels too small and the palmrest area is huge. Readers with large hands should take note: this laptop could serve you well.

A backlit keyboard is standard, though lacking in features. It has no brightness settings besides on and off. The default brightness is fine for a room dimly lit by a single lamp, but it’s a bit too bright for comfortable use in a pitch-black room.

We didn’t find ourselves using the touchscreen on the 15z frequently. Why lean forward when a perfectly capable touchpad is provided? Though un-textured and basic, the touchpad offers plenty of space, handles touch gestures smoothly, and includes a pair of adequate left/right buttons.

At first glance, we thought the 15z’s display was better than average. It has a high-gloss finish that exaggerates contrast and sharpness is decent in spite of the screen’s mundane 1366 x 768 resolution.

Audio quality is average for a laptop in this class. It’s generally clear and loud enough to fill a room with sound, but bass can cause serious distortion at high volume. This proved most noticeable when listening to music and watching action scenes in movies. Buyers who care about audio will need a pair of external speakers or headphones.However, further testing soured our impression. We found the laptop could handle only 63 percent of the sRGB scale and took note of disappointing black level results. Tests also revealed low brightness scores that became a practical issue on one sunny day of testing. The 15z proved more useful as a mirror than a laptop.

At idle, the 15z proved capable of keeping its cool without being loud. We measured external temperatures of up to 96 degrees Fahrenheit in a small area on the laptop’s bottom, though most surfaces never raised above the mid-80s. Fan noise went as high as 41.4 decibels, which is low.

Placing a load on the laptop didn’t make it cry uncle. Temperatures reached a ceiling of 100.4 degrees, which is an average result, while noise levels did not exceed 47 decibels. That only occurred during the Furmark graphical stress test, however. The laptop was several decibels quieter during other benchmarks.

As mentioned, this 15.6-inch laptop weighs in at about 4.75 pounds. The 15z is heavy compared to smaller Ultrabooks but light for a laptop with a 15.6-inch display. The 15z isn’t ideal for frequent travel but it’s up for the occasional jaunt.

Battery life is reasonable. Our load test drained it in 1 hour and 46 minutes, but our light-load test extended life to 6 hours and 21 minutes. Peacekeeper’s battery test turned in a run time of 4 hours and 33 minutes. For an Ultrabook, these numbers are average.

Our power tests showed the laptop consuming a bit more power than typical. It required 14 watts at 50 percent brightness, and that figure increased to 31 watts during the 7-Zip processor benchmark. Both numbers are a few watts higher than average. Dell’s XPS 12, for example, needs only 10 watts at idle.

We’re happy to report that the 15z has minimal bloat. McAfee’s security suite trial is installed, and the Windows Start screen is adorned with a few eyesores, like eBay and the Dell Store, but they are easily ignored and removed. Dell’s backup and recovery suite is also included and will occasionally notify the user that it’s time to perform a backup.

Most of these pre-installed apps are not repeated on the desktop. Other than Amazon making its way onto the Windows taskbar, and an eBay shortcut hanging out on the desktop, the desktop environment is otherwise clean.

Our review unit arrived with a Core i5-3317U processor. We’ve tested this hardware in many Ultrabooks and it performed about as expected in the 15z. SiSoft Sandra’s Processor Arithmetic benchmark turned in a score of 38 GOPs while 7-Zip reached a combined result of 7,222 MIPS. Both of these numbers are slightly above average.

PCMark 7 came to a score of 4,321 – a solid result for a system in this price range. As with most Ultrabooks, performance came primarily by way of the solid-state cache drive. It shortens load times and gives the system a snappy, responsive feel.

3D performance relies on Intel integrated graphics and is lackluster as a result. 3DMark 06 and 3DMark 11 came to respective scores of 5,633 and 590. Both figures are a bit above average for the category. Still, don’t expect the 15z to be a gaming powerhouse. Even games that aren’t exceptionally demanding, like Diablo 3, will run well at only modest levels of detail.

Going big hasn’t caused the 15z to compromise its Ultrabook roots. This is a snappy, portable system. While it isn’t a performance powerhouse, it does meet the demands of the average consumer. Like Lenovo’s U-Series Ultrabooks, the 15z excels not because it is extraordinary in any one category but because it is consistently competent. The display is the only weakness, but competitors with better displays sell for more.

Dell sent us the touchscreen model, which means we are forced to judge it on the basis of its $899 price. That’s unfortunate. As we’ve noted in other reviews, the current $150 surcharge for a touchscreen is way too much. The truth is that touch is almost pointless on a laptop that doesn’t convert to a tablet. It does nothing but spoil the value.

That aside, the 15z is a good choice among the current crop of plus-sized Ultrabooks. It is reasonably priced, quick, and pleasing to use. Just keep it away from windows on a sunny day – unless you like your laptop to double as a vanity.